Cate Blanchett had just gotten off a redeye flight on Thursday morning, but by 11 a.m., she somehow looked better than most of us do on eight hours of sleep. Seriously, her skin was glowing and her under-eye bags were more or less nonexistent. Though, her travel routine probably has something to do with that.

“I have no shame, as soon as the lights go down on the plane, I put my mask on,” Blanchett, the face of SK-II, said. She mentioned that she’s a big fan of using the brand’s Brightening Derm Revival Mask and the classic Facial Treatment Essence, not caring what her fellow travelers think about her applying a sheet mask in flight.

Blanchett was in New York for the latest launch from SK-II, a limited edition makeover of their iconic Facial Treatment Essence Bottle. The theme of the revamp is Change Destiny, with a major push for positivity, embracing transformations and celebrating your own choices.

The Oscar-winning Australian actress is well-known for her on-screen intensity and effortless professionalism, but her flawless skin deserves some credit, too. She started using SK-II’s products well before she was tapped to be a global ambassador for the brand in 2007, claiming that she’s been devoted to the Essence for at least 15 years.

“I don’t think I could have predicted the positive level of change by simply being loyal to a product for so long,” the 48-year-old actress explained. “I noticed the change in my skin’s texture and tone after about three or four weeks, I thought this was extraordinary—and this was before I was associated with SK-II. So I just decided to stick with it.”

She also might be the most inspirational celeb with a beauty contract, as she’s not afraid to infuse her public appearances with a few reality checks. For example, along with the three positive mantras written on the new SK-II bottles (“Be the Person You Decide to be,” “Change is in All of Us” and “Destiny is a Matter of Choice”), Blanchett joked about adding one more to the range.

“There’s a fourth one that says, ‘We Should All Be Feminists,'” she deadpanned. And when asked about providing advice to women today, she acknowledged the position of which she was speaking from, “as a privileged white woman.”

Blanchett went on to share some words of wisdom, despite not being a big fan of giving advice—she prefers to lead by example.

“I think, particularly at the moment, it would involve [having] self-respect and not being frightened to call things out when they’re not right,” she said. The last part was perhaps in a nod to the current Hollywood scandal, involving allegations of Harvey Weinstein‘s various sexual assaults. Blanchett also endorsed the concept of working with and supporting other women, but not without referencing the current political climate.

“It feels like a very depressing time,” she admitted. “[But] I think it’s actually a very potentially positive time to turn that around. And if we act collectively, we can effect positive change, not just on our own destinies, but our destiny as a species.”

It’s a refreshing change, which is in line with the new SK-II range (arriving at Sephora and Sephora.com on October 20), that a beauty ambassador doesn’t just have to be a pretty talking head; she can take bold stances and share her own beliefs, too. 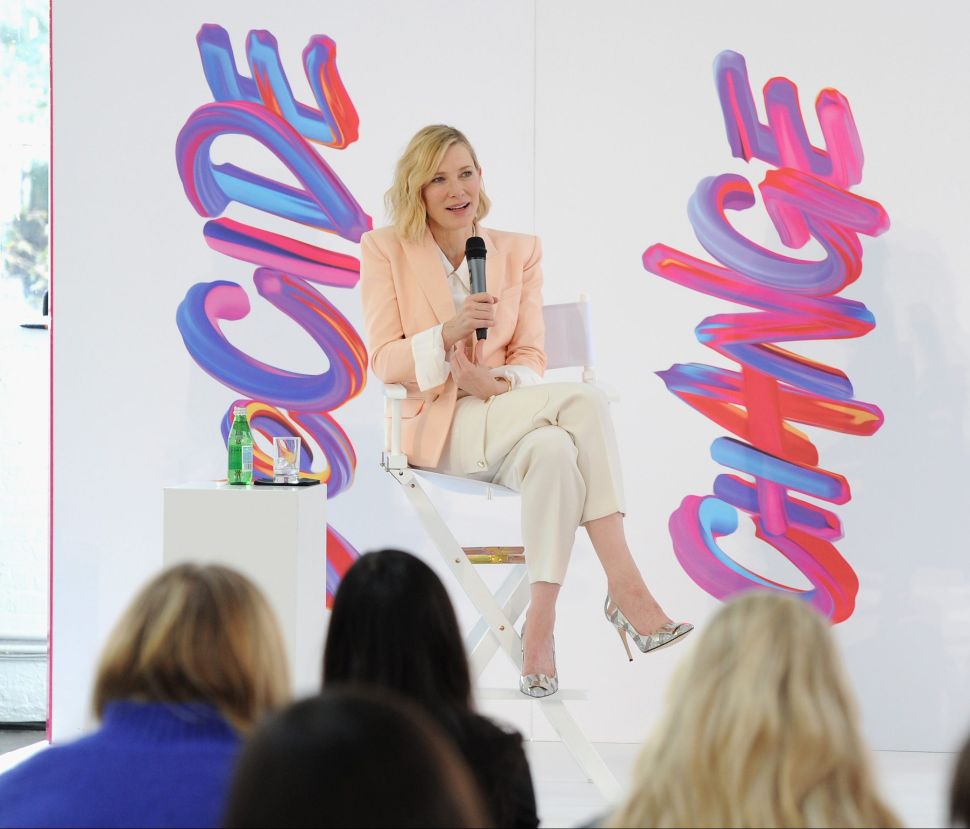