Not all heroes wear capes. Some of them become the first African-American Supreme Court justice.

Costume designer Ruth E. Carter recently worked on two very different superhero films, both starring Chadwick Boseman of Captain America: Civil War fame. One, Black Panther, is set for release next February and the other, Marshall, is set in 1940s Connecticut and based on real events.

Marshall isn’t Carter’s first foray into a period setting; she was nominated for an Oscar for Malcolm X and Amistad, and recently worked on Civil Rights era films, Selma and The Butler. Carter is currently in Utah on the set of the forthcoming Paramount Network drama Yellowstone. Observer reached her over the phone to discuss Marshall, which takes a look at an early case in the illustrious career of Thurgood Marshall, the first African-American justice of the U.S. Supreme Court, who is played in the film by Chadwick Boseman.

Rather than being a cradle-to-grave biopic or even portraying Thurgood Marshall’s most famous case—Brown v. Board of Education—this movie goes back to 1941 when he was a young lawyer rising within the N.A.A.C.P. When a black chauffeur (played by Sterling K. Brown) is accused of raping his boss, a wealthy socialite (Kate Hudson), the odds of winning the case are stacked against him.

In the trailer you see Marshall getting dressed for court—footage that was shot before Carter came on board and was used to help get financing. It’s a moment that feels like a superhero putting on his costume, but instead of a cape or mask, it is a bold tie and suit. A uniform of a different kind, but one that Carter discusses in a wider historical sense.

“I also thought of The Butler when I saw that scene,” she said. “I felt like it was many black men that we have had in our lives and our history that go to work, that put the uniform on and that perform a service to the highest level.”

Because this is merely a snapshot moment in the career of Thurgood Marshall, Carter also points out that as he got older he began to wear more simple and less tailored attire. Trends change after all, but in 1941, “His wardrobe is immaculate and he’s in the double-breasted suit and he has a beautiful tie. He has the big trench coat on.”

Chadwick Boseman told The New York Times that in playing Thurgood Marshall he “wanted to capture his personality, his swagger, his love of life, his sense of humor and his ambition” and the suits are intrinsic to this. At times Carter wonders if she “could have dialed it back.”

“There is part of the man there that sometimes gets shrouded by the clothes and I didn’t want to upstage the view of him as a man,” she added.

And yet, her research showed this was how he dressed during this period.

“When you look at the 1940s pictures of Thurgood Marshall, he’s wearing all of the accoutrements that we put on Chadwick. In many ways it gave him a little bit more of a forward presence during that time,” said Carter. “People could look up to him. He was a representative of the N.A.A.C.P. and so he was a national leader in that way. He put them on the map.”

Researching the clothes that black men wore during this time, and not just looking at photos of Thurgood Marshall, was an important part of Carter’s research process, she said. Carter has done many historically based films before and in her research she found an archive of work by Teenie Harris; a photographer based out of Pittsburgh in the 1940s. Harris captured his images of her family, friends, and life in the city around him. His photographs of the period were “totally inspiring,” said Carter.

Harris’s photography prominently featured dance halls, a universal location where young working class black men and women would dress up and have fun. This depiction of Marshall’s early life is not all about his time in court, the young lawyer is also seen enjoying some downtime with famous poet Langston Hughes and writer Zora Neale Hurston in Harlem jazz clubs. Cue some really fancy threads designed by Carter, including satin shoes, fur wraps and incredible hats.

Carter found original suits made by costume designer Adrian and outfits from the now-defunct brand Lilli Ann for Kate Hudson in her role as Connecticut socialite Eleanor Strubing—the woman who accused her chauffeur, Joseph Spell, of sexual assault and attempted murder. Rather than photographs of Strubing, Carter said she “based it on beautiful images of advertisements of women in these suits from Bullock’s and I. Magnin.”

One challenging aspect of making Marshall was finding and making all of the period costumes on a shoestring budget, Carter said. Chadwick Boseman’s suits throughout the film are vintage, but for the character of lawyer Sam Friedman (Josh Gad), Carter built suits from scratch based on patterns and material from the era. Friedman joins Marshall’s team because at this time, even in the North, Marshall was still not permitted to try the case. After both Friedman and Marshall sustain injuries in separate scuffles, Marshall tells Friedman “You are one of us now.” Carter reflected this through subtle changes in his costume, such as flashy details like a pocket square and a pocket watch chain.

Marshall might be set in 1941, but the story is still incredibly relevant to what is going on in 2017. I asked Carter about the connection between past and present. She told me how proud she was to work on a movie like this because of how important it is to honor figures like Marshall, who died in 1993.

“What he was able to accomplish by sitting on the Supreme Court should make anyone who sees this film feel like there is hope,” she added.

You Don’t Have to Time Travel to Get ‘Outlander’ Style
‘Mark Felt’ Costume Designer on Conveying Power Through Ugly, 1970s Ties
It’s Going to Get Ugly in ‘Crazy Ex-Girlfriend’ Season 3
Look to TV’s Crime-Fighting Female Badasses for Your Workwear Wardrobe Inspiration
Where to Shop All the Looks From HBO’s ‘Insecure’ 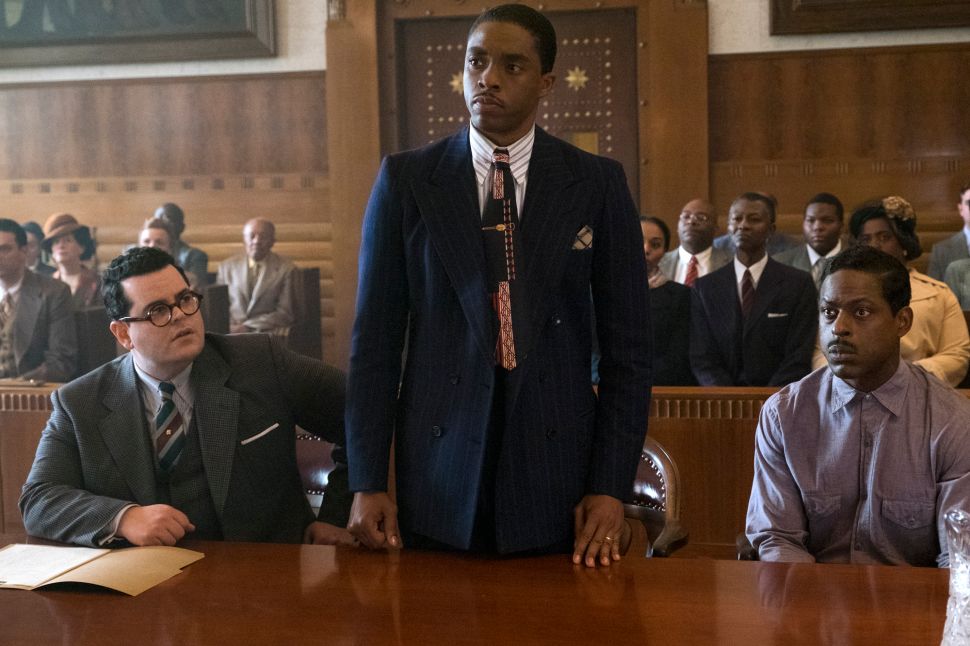