The NYPD and New York City’s top elected officials called the conviction of a New Jersey man who planted two bombs in the Chelsea section of Manhattan in September 2016 a “victory” in the city’s fight against terrorism.

Afghan native Ahmad Rahimi, 29, a naturalized American citizen who resided in Elizabeth, New Jersey, faces a mandatory sentence of life in prison and is scheduled to be sentenced on Jan. 18, 2018 following a two-week trial, according to the U.S. Attorney’s Office for the Southern District of New York. He was found guilty on all counts in connection with planting the bombs. The charges included using and attempting to use a weapon of mass destruction, bombing a place of public use, destroying property by means of fire or explosive, among other charges.

Acting U.S. Attorney Joon Kim said that Rahimi’s “crimes of hate have been met with swift and resolute justice.”

“Just over a year after his attacks, and following a fair and open trial, Rahimi now stands convicted of his crimes of terror by a unanimous jury of New Yorkers,” Kim said in a statement. “As a result, he now faces a mandatory sentence of life in prison. Today’s verdict is a victory for New York City, a victory for America in its fight against terror, and a victory for all who believe in the cause of justice.”

Rahimi was arrested and charged after he planted two pressure cooker bombs in Chelsea on Sept. 17, 2016, according to the complaint, indictment and evidence presented at trial. The first bomb, which was in the vicinity of 135 West 23rd Street, detonated and injured more than 30 people. The second bomb, which was in the area of 131 West 27th Street, was identified by a civilian shortly after the first bomb detonated, the complaint said. The civilian called 911, and the bomb did not go off.

He was arrested by police two days later in Linden, N.J. following a shootout with police.

Earlier that day, another improvised explosive device planted by Rahimi in the early morning hours, detonated in the area of Seaside Park, N.J., along the route for the Seaside Semper Five Marine Corps Charity 5K race, according to the complaint. The start of the race was delayed but if it had started on time, the bomb would have gone off as runners were passing by where Rahimi had planted it.

In a statement, Police Commissioner James O’Neill noted that the combined efforts of the Federal Bureau of Investigation, the NYPD, the New York State Police and the Linden New Jersey Police department led to the capture of Rahimi “within 50 hours of the bombing.” He called the investigation and conviction “an example of the work of the nation’s best counterterrorism team.”

“I want to commend the detectives, agents, police officers, the prosecutors of the United States Attorney’s Office for the Southern District of New York, and members of the jury for bringing Ahmed Rahimi to justice,” O’Neill said in a statement. “Today’s verdict is the most forceful deterrent for anyone considering waging terror in our City. We will investigate; we will find those responsible; and justice will prevail.”

Gov. Andrew Cuomo said that the conviction sends a “clear message” that anyone who looks to spread fear and violence in New York “will be brought to justice.

“In the wake of the horrific bombing in Chelsea, New Yorkers showed their true character and demonstrated unparalleled bravery and resolve,” Cuomo said in a statement. “The remarkable work of first responders and state, local and federal authorities saved lives. These attacks are meant to instill terror in New Yorkers, but time and time again, we have showed that we will not be cowed by cowardly acts that seek to disrupt our lives and our communities.”

“The Chelsea bombing was an attempt to bring our city to its knees,” de Blasio said in a statement. “Instead, our NYPD, FBI and federal prosecutors have brought Ahmad Rahimi to justice. His evil was met with the bravery and resiliency of a beautiful neighborhood and an entire city. New York City will never be intimidated. We remain vigilant, resolute and safe. Congratulations to all those involved in this important prosecution.”

“Mr. Rahimi, who was inspired by ISIS’ radical ideology, sought to kill innocent Americans, but instead was swiftly held accountable for his violent actions,” Donovan said in a statement. “As New Yorkers we know that the strength and resiliency of our city will always be greater than the enemies who wish to attack our values and freedoms.” 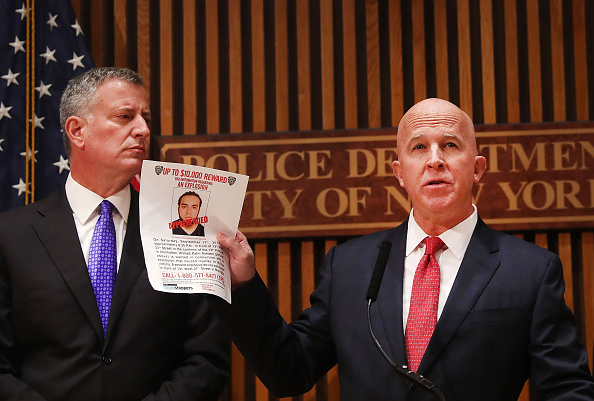