This week the cholera outbreak in Yemen became the largest and fastest epidemic of its kind ever to be documented since record keeping began in 1949, according to UN, NGO and human rights groups working to also stave off a famine in the Middle East nation.

As of Wednesday, doctors with the UN’s World Health Organization reported 815,314 cases and 2,156 deaths as a result since the epidemic began sweeping across the country in April, NGO Save the Children International reported. It took just six months in Yemen to break the previous record set over the course of seven years in Haiti.

Cholera is spread through fecal bacteria in .

Appropriately, international human rights groups blame the proxy civil war in Yemen, now two and a half years strong with no end in sight as the world barely takes notice. Saudi Arabia, backed by a vast supply of American armament, is recklessly bombarding the country in its fight against Houthi rebels, who are supported by Iran.

In its aerial campaign, Saudi Arabia has destroyed Yemen’s sanitation system and hospitals, compounding the problem.

According to Save the Children, about 4,000 suspected cases are reported daily—more than half of which are children under the age of 18. Of those infected, the NGO said, 25 percent of cases are children under the age of five. If the pace remains constant, more than 1 million Yemenis will become infected, with 600,000 of those being minors, Save the Children warned on Wednesday.

What’s being done to help those poor people?

Nothing—other than the outstanding work being carried out by aid workers and volunteer doctors.

“It is completely shocking. The existence of a cholera outbreak in general is unforgivable in the 21st century because it means there’s no access to clean or sanitation,” Ruairidh Villar of Save the Children told Foreign Policy on Tuesday. “This shouldn’t happen.”

In late 2016, a Singaporean ship named the Kota Nazar was loaded with 636 containers of steel, paper, medicine and other goods, bound for Hodeida, the largest cargo port in Yemen. But the needed supplies never got there.

The U.N. tried to set up a system in May 2016 to help in the delivery of commercial goods through the blockade, but it failed in guaranteeing Yemenis get what they’ve needed.

Airports in Yemen lie dormant, indefinitely closed. A naval blockade by Saudi Arabia and its Sunni-Gulf partners is preventing critical, life-saving humanitarian aid from reaching Yemeni’s afflicted with cholera, which has hung around in the country for years, according to Yemen Country Director Tamer Kirolos.

“It’s what you get when a country is brought to its knees by conflict, when a healthcare system is on the brink of collapse, when its children are starving, and when its people are blocked from getting the medical treatment they need,” Kirolos said.

“There’s no doubt this is a man-made crisis,” he continued. “Cholera only rears its head when there’s a complete and total breakdown in sanitation. All parties to the conflict must take responsibility for the health emergency we find ourselves in.”

The war has destroyed the economy, left millions without jobs or the means to earn a living, and forced 3 million people to flee their homes, according to UN figures.

The chaos has created a crisis that has left 7 million people on the brink of starvation. And the war has destroyed or damaged more than half the country’s health facilities and ushered in one of the world’s worst cholera outbreaks in over 50 years.

As of July, many of those same governments had given just $620 million toward the $2.1 billion overall UN appeal for Yemen.

By selling arms to Saudi Arabia for massive profits out the back door and giving a pittance in aid in the front door, the West—chiefly the U.S.—once again stands as a global hypocrite on the international stage as children publicly starve to death.

Here’s the problem, though: Is anyone paying attention? 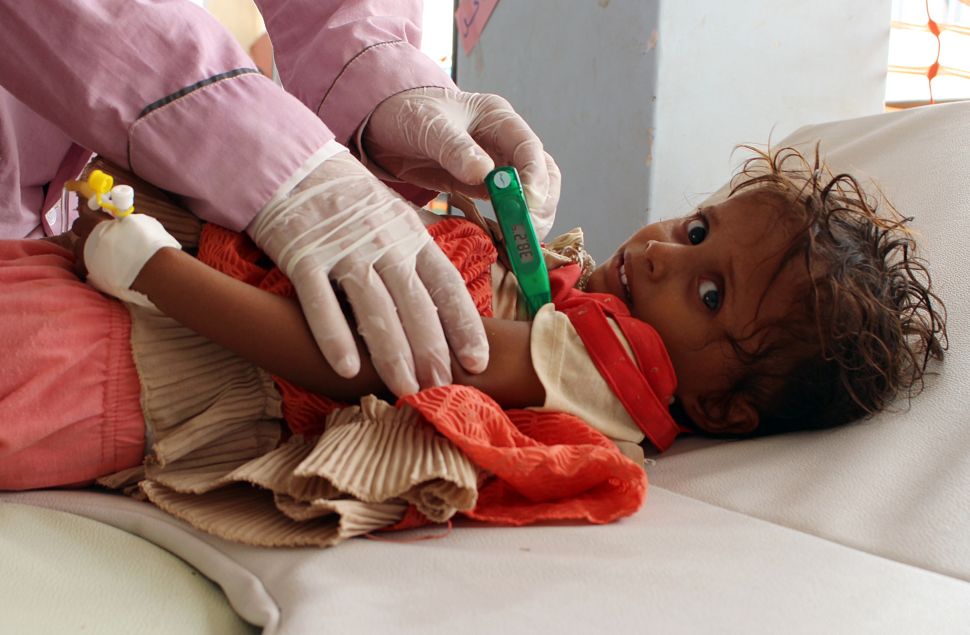