With over 2.2 million people currently trapped in our country’s prison industrial complex, one could hope that some Americans are finally waking up to the truth to our justice system’s darker motives. An interest in what it means to do time has trickled down into art and media, and along with it, a dozen ethical landmines around prison representation. While TV dramas like Orange Is the New Black often flub attempts to portray life behind bars accurately, comic books have taken a different approach, using outlandish premises to take precise realism out of the equation while still examining the issues faced by those in lockup. 2014 saw the debut of  Kelly Sue DeConnick’s Bitch Planet, which tackles female representation and the crooked system in an outer space women’s prison. Bitch Planet was a critical darling and took a more holistic look at producing feminist artwork—the back pages of the first edition’s graphic novel feature a list of talking points to encourage discussion about the topics covered in the book. Saladin Ahmed’s current Blackbolt storyline sees the Marvel inhuman teaming up with sympathetic villains Absorbing Man and Metal Master to escape a trippy high tech penitentiary after being wrongfully incarcerated.

On the more outlandish end of the spectrum is Zander Cannon’s Kaijumax, a comic about an island prison for giant monsters, called mons. In the world of Kaijumax, which debuted in March 2015, inmates speak unique slang; humans are known as squishers and swear words like “goj dammit” and “redking” replace similar epithets. Prison gang the Cryptids stand in for the Aryan Brotherhood—they believe their genre of monsters is superior to all others. But many of the kaiju on the island are relatively harmless—stressed dad Electrogor got taken down while gathering electricity for his kids. Once on the island Electrogor survives by bartering the radioactive orbs he generates on his back—they provide a fix for uranium addicted monsters who find themselves locked up thanks to harsh drug charge sentencing. Electrogor bellows “You’re the monsters!” at the prison guards just a few pages into the first issue.

Cannon is a longtime student of kaiju films and had been interested in doing a story set on a giant monster island. He’s often interested in writing stories with trapped characters—his previous comic, Heck, is about people who (literally) go to hell. “I like to kind of ethically stack the deck in favor of the protagonist” Cannon told me via e-mail. “If the space they’re in is intolerable, they can be a lot more dynamic and violent and maybe even a little unpleasant in places because we know that they’re doing their best to survive.” Cannon believes that the trend of bizarre crossovers in comics is on its way out, but he’s been happy to capitalize while it persists. He initially considered having the story take place in a bar or workplace for giant monsters, but he eventually settled on the prison setting. Once he put all the narrative pieces together, he knew he was on to something.  “I started to realize that  it was a much richer concept than I had initially thought, which is, you know, a nice thing to realize.”

The primary influence on the kaiju aspect of the series is the absurd special effects work of Eiji Tsuburaya, who did costume design and cinematography on films and tv shows like Godzilla and especially Ultraman. The correctional officers, humans with the power to grow to a tremendous size to contain their charges, are themselves dead ringers for Ultraman. The neon palette of Kaijumax stands in stark contrast to its toothy plot. Cannon tells me prison drama Oz is a significant influence. If that’s the case, I’d like to see more “gay for the stay” monster love. Like Oz or any television show, the comic is broken down into seasons. Season one took place primarily within Kaijumax, and season two featured life outside the island—a mon named the Red Humongo attempts to integrate with human society, but is pushed over the edge by an unsatisfying construction job, freeloading family members, and an overzealous parole officer. Now in its 3rd season, Cannon described the current storyline of Kaijumax as “a little quieter, relatively speaking, I could kick around some quieter ideas, like personal integrity.” In particular, some focus seems to have gone towards the sheepish Creature from Devil’s Creek—a shy giant goat man who receives prison visits from his strict, religious human mother while also fending off the Cryptids. “A couple characters I do not enjoy writing are the Cryptids,” bemoaned Cannon.  “Especially when they get on a tear about their species supremacy, and so forth. I was writing a scene in which they were all accusing each other of being traitors to the cause, and making oblique references to white supremacy stuff, and I thought “Why does my face hurt?” I had been sneering as I tried to get into the heads of these characters.”

The extensive bestiary of characters in Kaijumax can be dizzying to follow, but they’re mostly in service of allegories regarding addiction, anguish, and individual responsibility versus outside influence. Cannon cares deeply for the kaiju genre, and by extension, his hulking cartoon creations, and that emotional connection rubs off on the reader. There’s a tenderness to some of these creatures—their concerns and their dialogue, as they get repeatedly crushed underfoot by Kaijumax’s circumstances. Kaijumax lures you in with its incredible range of sci-fi creations powered by Zander’s encyclopedic knowledge of the genre. Cannon then tramples you with so much raw emotion that you’ll be thinking about this comic, and by extension the nature of prison, for days to come. 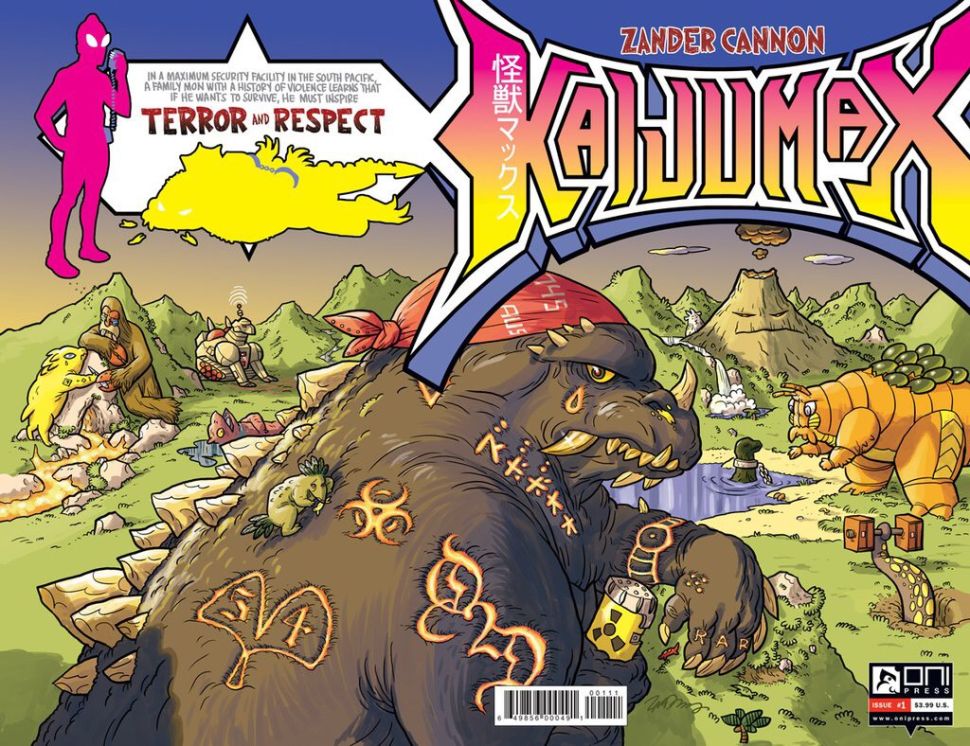