For the sake of our national security, it would be wise for the conferees to trade in their jogging shoes for a walking cane.

One section of the NDAA brings perhaps the most significant threat to-date to both President Donald Trump’s “America First” foreign policy agenda and Democrats’ Russia concerns: an increased dependence on Kremlin-manufactured products. As unlikely as this seems, let me explain.

Section 1615 of the NDAA will prevent the Air Force from developing new launch systems, something that many experts believe will increase America’s dependence on the Russian-made RD-180 engine.

Today, the Air Force typically utilizes three launch systems: The Falcon 9, a new player that has often reduced launch prices; the RD-180-dependent Atlas V, arguably the most reliable option; and the Delta IV, which is pricey and scheduled to retire.

There are public-private partnerships to develop RD-180 alternatives, but they may not save the Atlas V. Launch systems are not puzzles; it is difficult to replace many of the parts.

Last year, even President Barack Obama’s Pentagon testified before the Senate Armed Services Committee to say that, “Any effort to simply replace the RD-180 with a substitute engine would require extensive design and engineering changes, as well as significant dynamic and acoustic testing, and would ultimately result in a new launch system, which would require recertification.”

With the Atlas V potentially on its way out, Section 1615 may limit the government to only two launch systems: The Falcon 9 and the Delta IV, assuming the manufacturer extends the Delta’s life. When analyzing what these limited market options would mean for taxpayers and national security, though, it is hard to believe that the 2022 ban will stay in place.

In a memo expressing its opposition to Section 1615, the Air Force said, “The language appears to allow upgrades to the SpaceX Falcon 9 launch vehicle, which can only meet about 50 percent of the National Security Space (NSS) missions.”

Should this provision go into effect, the Delta IV—the only remaining launch vehicle—will receive the remaining 50 percent of contracts. According to the U.S. Air Force, this launch vehicle “is at least 30 percent more costly than other launch vehicles.” The increased costs associated with utilizing this outdated line will “handicap the Air Force’s eyes and ears in space,” because the budgetary restrictions it imposes will limit the nation’s defense and exploration capabilities.

The White House estimates that Section 1615 would “increase taxpayer costs by several billions of dollars through FY 2027″—a number so high that it makes it hard to believe Congress will hold true to its original plan to phase out the use of Russian rocket engines.

When Congress must choose between keeping America safe or promoting domestic dependence, nearly every member will understandably choose the former. This fact is likely the reason why the Administration said Section 1615 would “cause delays in transitioning from Russian engines.”

This analysis should concern liberals and conservatives alike—and it has.

On the right, the Trump administration expressed strong opposition to Section 1615, as did former congressman Ron Paul (R-TX), the longtime leader of the Republican Party’s libertarian wing.

On the left, some Democrats signed a bipartisan letter to Secretary of Defense James Mattis detailing the need to invest in domestic launch systems. Among the signers was Congressman Adam Smith (D-WA), a Ranking House Armed Services Committee member, appointed conferee, and outspoken critic of the alleged Russian meddling.

It is times like this where the long-idle ‘Read the Bills’ legislation would come in handy. It does not appear that many of the Armed Services conferees would support Section 1615 if they had the time to review it closely. But there is still time. 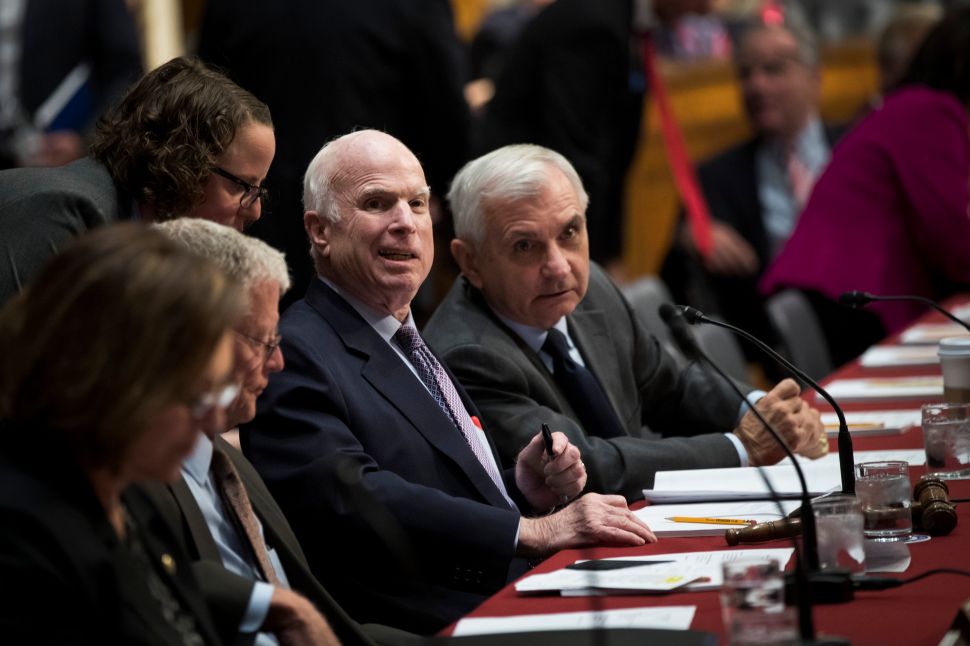