A commission Mayor Bill de Blasio set up to review the city’s statues and monuments met on Tuesday and will be releasing a survey and public forum in the coming days amid a debate over whether Christopher Columbus statues should remain in place.

In September, de Blasio announced the 18 members of the commission, which is co-chaired by Darren Walker, president of the Ford Foundation, and Tom Finkelpearl, commissioner of the Department of Cultural Affairs. The commission will present its recommendations by the end of the year as well as a description of the mayor’s final decision.

“We know there are important conversations surrounding these structures happening all over New York City,” de Blasio and Finkelpearl said in a statement. “In order to incorporate these dialogues in this comprehensive process, we will be hosting an online survey and several public forums across the city. The survey and forum schedule will be released in the coming days.”

The mayor and the commissioner called the Tuesday meeting “an important step in the commission’s work” and said that while recent events placed an “understandable agency” on their work, they are not “new controversies.”

“Public sculptures and monuments have sparked intense debates stretching back decades,” they continued. “Monuments are lasting embodiments of our city and nation’s people. Our goal is to make our public landscape more reflective of that rich and complicated history. This thoughtful community conversation is our city’s first attempt at making these important strides.”

In the statement, they did not indicate which statues were discussed or exactly when or where the meeting took place.

Before marching in the Columbus Day Parade on Monday, the mayor  maintained his pride in his Italian heritage and said that he is not worried about critics. He also maintained that no changes will be made to any statues in the short term, and that the issues surrounding the statues have been occurring for years.

But despite his attempts to dismiss critics, he was met with angry attendees — including independent mayoral candidate Bo Dietl and Guardian Angels founder and Reform Party chairman Curtis Sliwa — who booed and jeered as he marched along the parade route.

His Republican opponent, Staten Island Assemblywoman Nicole Malliotakis, blasted the commission, which she has called a waste of time. She is in favor of keeping the Columbus statue in Columbus Circle.

“With so many working and middle class families forced to leave New York City because of the sky high cost of living, one would think Bill de Blasio would assemble a group of experts to tackle the serious problems facing New Yorkers,” Malliotakis wrote on her Facebook page. “Instead he gives a statue commission. Nicole Malliotakis will get to work on Day One.”

More than 1,000 people signed a petition handed out at the Bronx Columbus Day Parade, to which the mayor was not invited, to keep the Columbus statue in place.

The anti-Columbus movement has been just as vocal. Decolonize This Place hosted the second annual anti-Columbus Day tour on Monday at the American Museum of Natural History.

The violence from a white nationalist rally in Charlottesville, Va., sparked a movement throughout the country requesting the removal of status, monuments and markers with the names of Confederate generals. 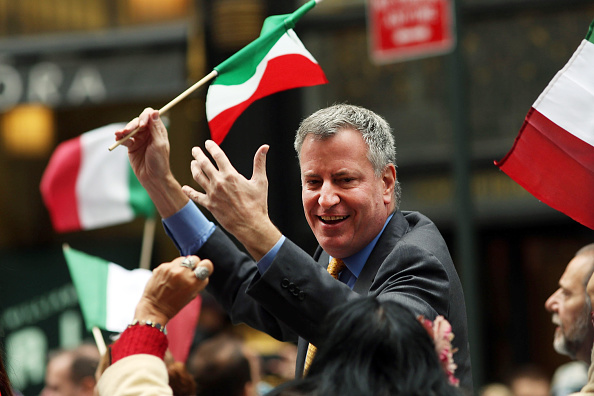