Mayor Bill de Blasio accused Gov. Andrew Cuomo of misinterpreting his comments on how the city addresses the issue of homeless people sleeping on subway trains, reiterating that the NYPD is prepared to tackle the issue.

On Sunday, a New York Post reporter showed de Blasio a recent Post cover with a homeless man sleeping under the seats on a downtown 3 train. De Blasio said that it was “unacceptable” and that Metropolitan Transportation Authority rules permit the NYPD to put in additional personnel “to stop something like that from happening.”

But on Monday, Cuomo told NY1 that the NYPD polices the subway system, a change that he said occurred under the administration of former Mayor Rudy Giuliani in 1995 “because the city owns the subways.” The MTA, however, is a state-run agency under Cuomo’s authority that manages the subway system. Cuomo said that what the NYPD “used to do” is get help for homeless individuals, suggesting that that was not the case under de Blasio.

At an unrelated press conference on Tuesday, the mayor said that there was a “misunderstanding” and stressed that the city is ready to step up to solve the problem.

“That’s our responsibility to address, which is what I said,” de Blasio said, repeating his comments from the weekend. “So I think some signals got crossed along the way. I’m very comfortable when I have a responsibility to address something, I’m going to address it and that is the NYPD, which patrols the subways and would never accept that kind of condition that they saw and obviously our homeless outreach teams, which have increasingly found effective ways to get people off the streets.”

The city, he said, has maintained that it wants to increase the presence of the NYPD “wherever it’s needed” as well as the Fire Department’s efforts to assist in emergencies and the city’s homeless outreach effort. The mayor said that this is a point he has reiterated “even in times where I’ve had differences with the governor on the MTA.”

“We’re ready to do more and wherever we see a need, we will put more resources on it,” de Blasio continued. “So I don’t know why he would criticize the NYPD, which is I think doing an outstanding job but I also think there was some missed signals in what was presented to him. I’m very comfortable saying that’s something that we are gonna take responsibility for addressing.”

But on Monday, Dani Lever, a spokeswoman for Cuomo, responded to mayoral spokesman Eric Phillip’s assertion that the governor “criticizing the men and women of the NYPD won’t fix the subways.”

Misleading. NYPD polices subways since '95. More homeless on trains&in stations now than ever. We have to do better to help homeless&riders.

The latest spat comes as the mayor and the governor spar over who oversees the city’s subway system and who should fund an $836 million short-term plan to fix the subways that MTA Chairman Joe Lhota proposed at the end of July.

In a statement, Lhota said that the mayor’s comments “acknowledging his responsibility speak for themselves.”

“No one is the criticizing the NYPD, they should be praised for their work in reducing crime,” he said. “The issue is mayoral policy applied to the NYPD.”

The MTA chairman said that there are more homeless people on the trains and subway stations than under past mayors because the police “have not been directed to help the homeless in the subways.”

“The goal should be to help the homeless get the services they need, not be left to sleep in the subway system, and to protect the riders of our transit system,” Lhota continued.

This story has been updated to include a statement from the MTA chairman. 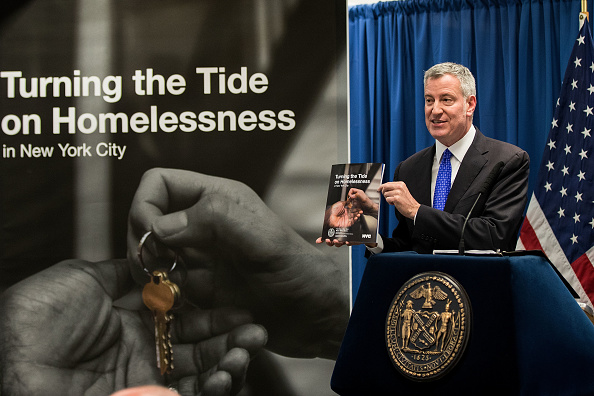