A week before voters head to the polls, the challengers in the mayoral race are calling for Mayor Bill de Blasio to be investigated, seizing on court testimony from one of his top political donors and saying it demonstrates a pay-to-play scheme at City Hall.

Jona Rechnitz, 33, a wealthy Brooklyn real estate developer who pleaded guilty to charges of corruption, alleged at the bribery trial of Norman Seabrook, the former president of the Correction Officers Benevolent Association, that he gave money to the mayor’s campaign in exchange for favors from City Hall.

On Friday, Rechnitz claimed that de Blasio asked him to contribute more than $100,000 in 2014 as he was trying to support Democrats’ efforts to regain control of the state Senate. And on Monday, he alleged that he financed the stay of Ross Offinger, de Blasio’s main campaign fundraiser, at a hotel in the Dominican Republic.

On Monday morning, former Brooklyn Councilman Sal Albanese, the Reform Party mayoral candidate, called on Gov. Andrew Cuomo to appoint a special prosecutor to investigate “widespread corruption in New York City’s municipal government.” He said that he hand-delivered a letter, dated Oct. 30, to Cuomo ahead of his press conference outside the governor’s office in Midtown Manhattan.

“It’s obviously widespread, it’s pervasive and there are precedents for this,” he said. “In the ’70s, Governor Rockefeller appointed a special prosecutor to investigate widespread police corruption and in the ’30s, the governor then [at the time] appointed the Seabury commission that investigated municipal corruption in the city, which led to the involuntary retirement of Mayor [Jimmy] Walker.”

He said that he wants the governor “to do the same thing to restore faith in New York City.”

In March, Joon Kim, the acting U.S. Attorney for the Southern District of New York, and Manhattan District Attorney Cyrus Vance announced that they would not bring charges against the mayor over a potential pay-to-play scheme involving the mayor’s now-defunct political nonprofit Campaign for One New York and his failed 2014 fundraising effort for the State Senate Democrats.

On Monday afternoon, independent mayoral candidate Bo Dietl, a former police detective, stood outside the U.S. District Court for the Southern District of New York in Lower Manhattan and called on U.S. Attorney General Jeff Sessions and the Public Integrity Section of the U.S. Department of Justice to reopen an investigation into what he claims has been de Blasio’s illegal fundraising. Prosecutors from the Public Integrity Section are handling the federal bribery case against Sen. Bob Menendez, a New Jersey Democrat.

“I’m running for mayor of New York City,” Dietl said. “You know why? ‘Cause I can’t stand corruption and this city is so dirty from that mayor on down and this guy that I just looked at right now in the courtroom, he’s a sleazebag and the mayor’s a sleazebag for giving him money and that’s what we’re dealing with right now.”

He also said that Cuomo should “put a special state prosecutor out of state to find out this nonsense going on.”

And in a radio interview on Monday morning, she said that the mayor’s assertion that the average New Yorker does not care about the pay-to-play allegations is “insulting” to city residents.

De Blasio has insisted that Rechnitz is lying and again repeated those claims on Monday.

The mayor’s spokesman told the Daily News that the mayor did not know about Offinger’s hotel stay and would not have consented to it and reiterated that Offinger was not a government employee and “did not make any decisions at any level for city government.” He also said that the mayor did not ask Offinger about Rechnitz’s claim yet because he just made the testimony.

“This is nothing more than a silly stunt,” Levitan said in a statement. “All of this has been thoroughly examined by multiple agencies, and the matters were all closed with no action taken.”

This story has been updated to include a statement from the mayor’s campaign spokesman. 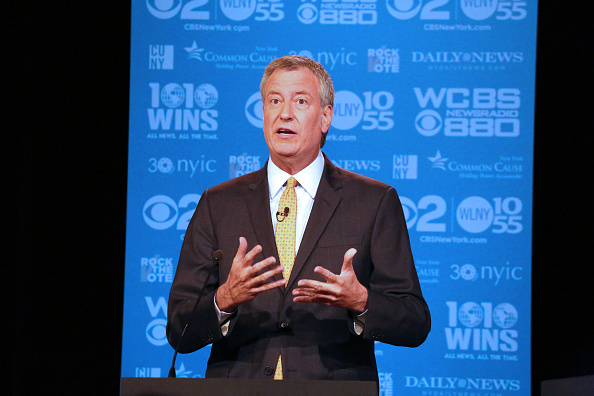