Mayor Bill de Blasio faced off against his GOP opponent Nicole Malliotakis and independent candidate Bo Dietl in a tense, noisy and raucous debate that featured multiple boos and jeers from attendees and the crowd and fierce attacks on his first-term record.

When de Blasio — who captured 61 percent of likely voters in a recent Quinnipiac University poll — started giving his opening statement, a large group of individuals in the audience yelled “Boo!” as he began to speak. Once the jeers cooled, the mayor spoke and immediately tied Dietl and Malliotakis to President Trump.

“My opponents are right-wing Republicans who voted for Donald Trump,” de Blasio declared.

Throughout the debate, the mayor got on Malliotakis’s case for her vote for Trump, asking her if she thought that Trump was better positioned to govern the country than former Secretary of State Hillary Clinton, who carried New York City by a wide margin in the November 2016 election.

Malliotakis did not answer the question directly but said that the mayor’s race was “not about Donald Trump.” She said that her approach to dealing with Trump is the same as de Blasio’s method of dealing with Gov. Andrew Cuomo, whom she implied de Blasio feared.

“When I disagree with the president, when I disagree with anybody in my party … I’m going to say so,” she said. “When something hurts the people of this city, I am going to fight it head-on. That is my priority. … Stop trying to deflect from your lousy record as mayor.”

The mayor touted his accomplishments during his first term: universal prekindergarten for 4-year-olds, overall crime being down and a rent freeze, among other accomplishments.

The conversation got tense, with Malliotakis arguing that the city has been mismanaged and Dietl insisting that the mayor has not accomplished anything in the last four years. They blasted his homelessness plan, his connections to real estate developers, insisted that crime was still a major issue and criticized his handling of the problems plaguing the city’s subway system.

Malliotakis ignored Dietl, instead focusing on attacking the mayor’s record. She maintained that de Blasio’s assertion that New York City is the safest biggest city is not true given that sex crimes are up even though crime overall has declined. She also accused him of overspending and failing to properly address mental illness issues in the city.

Dietl, for his part, mostly yelled and did not go after Malliotakis much, focusing his criticisms exclusively on the mayor. He yelled “Take it easy there, de Blasio” and “You’re a lying Big Bird!” at certain points during the debate.

“If I had my head in a potato field and I popped it out and listened to this mayor, I’d say I’d vote for him, too,” he said in a characteristic if somewhat confusing line of attack. “In four years, he’s done nothing. Tale of two cities, I heard that when he ran, tale of two cities. The only city he’s met are the … guys who’s giving him money.”

Dietl also addressed the Trump connection, calling the president a “lying narcissist” and maintaining that he is a registered Democrat, but arguing that he would find a way to work with Trump for the sake of the city. 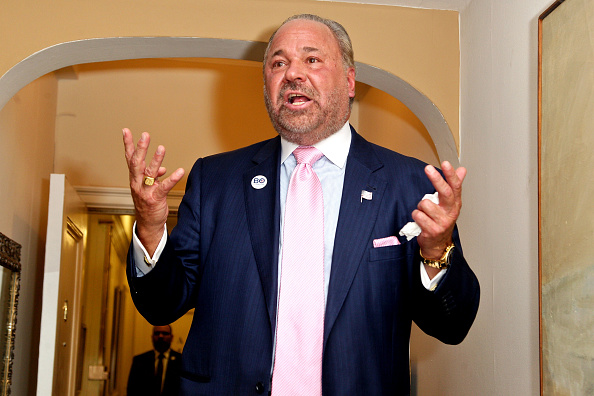