The mayor appears to be off to a strong start as the general election debate approaches, having captured more than 70 percent of the vote in the Democratic primary last month. And a recent Quinnipiac University poll found that he has captured 61 percent of likely voters, compared to 17 percent for Malliotakis and 6 percent for Dietl. He also trounced Malliotakis in Queens, Manhattan, Brooklyn and the Bronx, though he trails her on Staten Island.

Ken Sherrill, professor emeritus of political science at Hunter College, said that de Blasio “has his lines down” and that neither Malliotakis nor Dietl “have much gravitas.”

“If he comes over as cool, calm and collected and they wave their arms and shout, people will either switch to the national news or they’ll watch a baseball game or a football game because there’s nothing going on there,” Sherrill said. “For it to hold a meaningful audience, he has to make mistakes and they have to capitalize on them. The strategy for him is to be cool, calm and collected — stick to a script, carefully prepared and well studied statements — doing little more than repeating what he’s been saying for the past four years.”

Richard Flanagan, a political science professor at the College of Staten Island, said that he should “play it safe.”

“He should just be very gracious,” Flanagan said. “I’m sure the two others will try to bait him a little bit but he shouldn’t take the bait.”

A campaign spokesman for de Blasio did not respond to a request for comment.

At the end of September, the Staten Island assemblywoman received $1.5 million in public matching funds, providing her campaign with a boost after she became the official GOP mayoral nominee.

Sherrill said that he anticipates that Malliotakis will primarily attack de Blasio and offer occasional policy alternatives. He noted that other women who have run for mayor — including former Manhattan Borough President Ruth Messinger and former City Council Speaker Christine Quinn — had more substantial records and that she doesn’t have the background of achievements that former Mayors Rudy Giuliani and Michael Bloomberg had.

Malliotakis has been “very good and skilled” at attracting press coverage since she was first elected to the legislature, he said, but there’s no record of achievement because of the way the legislature operates.

“She has to present a positive vision for the city,” he said. “She has to seem as if she’s really thought about issues as opposed to simply being an ambitious politician.”

Flanagan said that Malliotakis may gain some momentum.

“There’s an open question if she can and by demonstrating some mastery of the policy questions, she can make a little ground as someone, a politician who can credibly do the job … and she’s bright,” Flanagan said. “I think she’ll talk about some of de Blasio’s deficiencies, homelessness, and try to get him to assume more responsibility for mass transit and other issues that have nagged the administration over the last four years.”

Richard St. Paul, a Republican strategist, said that the debate is the “largest platform that she’s ever seen to date.”

“I think that the main person who has the greatest opportunity to make a name for herself and really get into play is Assemblywoman Malliotakis, and so she’s got to make the case to the people of New York City why she should be elected,” St. Paul said.

He also said that the $1.5 million in public matching funds will help Malliotakis, suggesting that she put out TV ads and have people go to door to door.

Malliotakis said that all Dietl will do is make “noise.”

“I don’t even know why he’s in the debate, to be honest,” she said. “The mayor has shown his inability to effectively manage the city and deliver results for the city. The quality of life has deteriorated and he’s spending more money.”

She also dismissed the critique that she merely attacks the mayor and has not offered clear alternatives of her own, noting her plans to homelessness crisis, assist individuals with mental illness, student safety and spending money in classrooms instead of at the “top levels of bureaucracy.”

“Unfortunately the media chose to not want to discuss the actual issues of this campaign but I think that there’s a stark contrast and certainly that’s going to show on the debate stage,” Malliotakis continued.

Will Bo Put on a Serious Face?

The former police detective is known for often making comments and behaving in a way that it typically blustering and sometimes vulgar. But Dietl said he’s focused on the issues, speaking of weapons and drugs in schools and crime.

“I’m not debating with actors,” he said. “I’m debating on the facts and I’m not a politician so I prepare myself differently. I prepare knowing the issues and knowing some of the mistruths that the current mayor is telling people.”

He blasted the mayor for not taking more responsibility for the problems plaguing the city’s subway system despite the fact that the MTA is under the governor’s authority. And he took issues with comparisons between him and Malliotakis, insisting that he is a registered Democrat and that he sees himself as a moderate Democrat who can appeal to people of all party affiliations.

Sherrill said that Dietl has come across as a “clown,” arguing that Malliotakis will benefit “because she is not going to be a clown.”

“Dietl, who is a skilled performer, is used to being in front of audiences, in front of microphones, so on, may act like a responsible candidate,” he said. “If he does, he hurts her ’cause he splits the anti-de Blasio vote. If he doesn’t, if he comes over as the buffoon, as a lightweight version of Trump, then it helps Malliotakis, then it elevates her to the only alternative to de Blasio.”

Flanagan agreed, and said that his main claim for office — that crime is ballooning under the mayor — won’t hold sway with voters because all evidence indicates that “things are getting better.”

“He might start off a little bit more restrained but as the clock ticks, he’ll want to land some blows and then his essential self will be revealed,” he said. “I think the pressure of the competition brings out your essential self.” 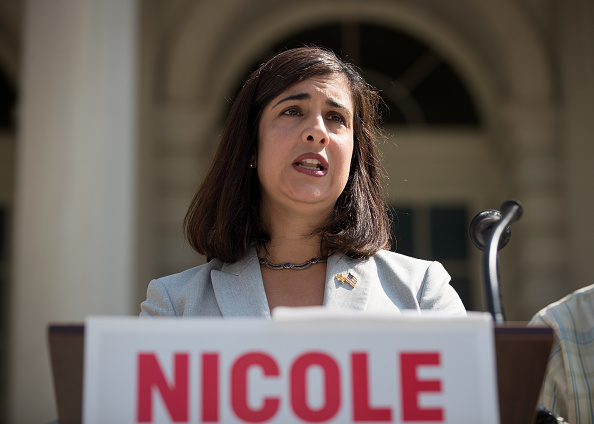