This week in Las Vegas, the DNC Unity Commission is meeting in conjunction with a DNC meeting. DNC Chair Tom Perez will formally announce his appointments and nominations to DNC positions, a list of which was leaked. The shake-up has already drawn criticisms from progressives, as four prominent supporters of Congressman Keith Ellison (D-MN), the progressive who ran against Perez in the February 2017 DNC chair election, were removed.

The first trans-person elected to the DNC, Barbs Siperstein, was removed, along with Ellison’s former secretary, Alice Germond, and New Hampshire Democratic Party Chair Ray Buckley. Our Revolution Board Member James Zogby was demoted from his Executive Committee seat to an at-large nomination. “I’m concerned about the optics, and I’m concerned about the impact,” Zogby told NBC News of the changes. “I want to heal the wound of 2016.”

Supporters of Ellison and Sen. Bernie Sanders are drastically underrepresented in Perez’s selections, and the nominations are weighted toward loyalists to Perez and Hillary Clinton. Former DNC Interim Chair Donna Brazile was nominated for an at-large position and appointed to the Rules and Bylaws Committee—a divisive pick given Brazile’s record of violating the DNC Charter during the 2016 primaries at the benefit of Hillary Clinton. CNN severed ties with Brazile after leaked emails revealed she tipped off the Clinton campaign to difficult questions preceding a CNN debate and town hall. No Sanders supporters were appointed to the rules and bylaws committee.

Several former and current lobbyists received DNC appointments and nominations, outnumbering those given to Sanders supporters. Jeff Berman, a former lobbyist for the private prison company GEO Group and the Keystone XL pipeline, received an appointment as a DNC at-large member. Jaime Harrison, a former coal lobbyist who ran for DNC chair and endorsed Perez after dropping out, was nominated for an Executive Committee at-large member position. Joanne Dowdell, a senior executive in the lobbying division for Fox News’ parent corporation, News Corp, was nominated to be an at-large member and appointed to the Resolutions Committee. Registered lobbyists Calla and Roxanne Brown were nominated to be at-large members. Clinton fundraiser and registered lobbyist Tonio Burgos was appointed to the DNC Finance Committee. Minyon Moore and Maria Cardona, senior officials at the lobbying firm Dewey Square, received an Executive Committee at-large and DNC at-large member nomination. Daniel Halpern was chosen to serve as co-chair of the DNC Finance Committee. As chairman of the Georgia Restaurant Association, Halpern played an active role in shutting down a bill that would have increased Georgia’s state minimum wage.

In his appointments, Perez clearly favored the party’s establishment. Rather than work with progressives to achieve unity, his tenure as DNC chair embodies the fall-in-line attitude that party leaders have exhibited toward the grassroots base of the party since Bernie Sanders’ presidential campaign.

2017 Is Already One of the Worst Wildfire Seasons on Record 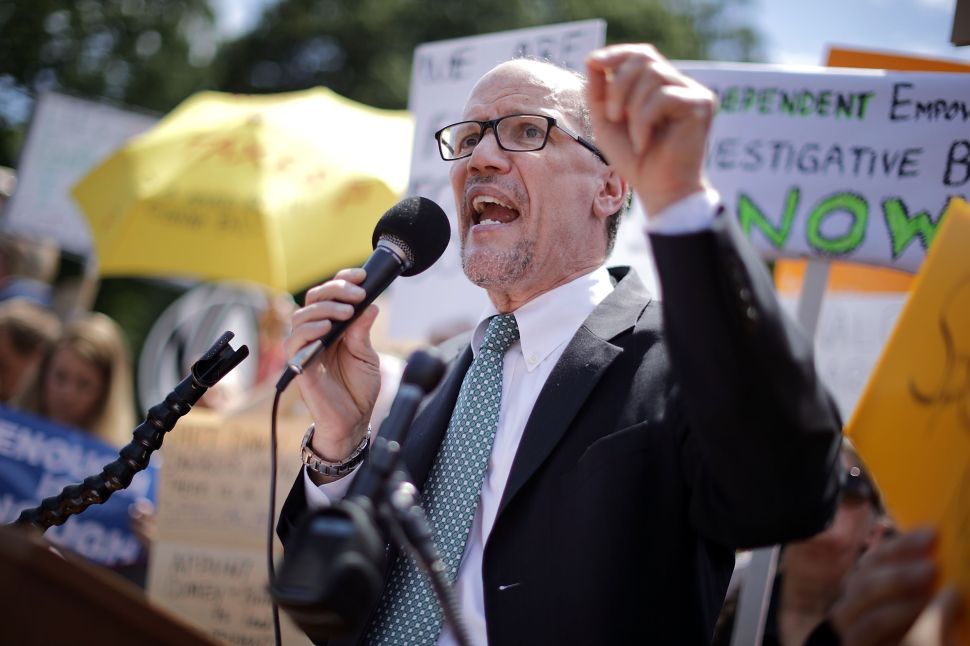