Most mornings, the early Twitter tweets of amateur President Donald Trump are like the loud passing of intestinal gas. They stink for a while but drift away. Thursday might have been the exception for this television-obsessed authoritarian.

Like a good contestant on Jeopardy, Trump put his words in the form of a question:

“Why Isn’t the Senate Intel Committee looking into the Fake News Networks in OUR country to see why so much of our news is just made up-FAKE!,” Trump wrote, substituting an exclamation point for a question mark.

The easy answer, of course, is that the First Amendment of the United States Constitution says in part: “Congress shall make no law… abridging the freedom of speech, or of the press… “

Or, to put it into Twitter-speak that Trump might understand, “Unconstitutional! Even if news is FAKE! Buh-LEEV me. This, I can tell you-you 71-year-old, orange-faced, yellow-haired FRAUD!”

Later, Trump continued his tantrum. He denied that Secretary of State Rex Tillerson threatened to resign last summer, as reported by NBC, and that T-Rex called Trump a “moron.”

“This is Fake News put out by @NBC News,” Trump typed with his remarkably short fingers. “Low news and reporting standards. No verification from me.”

He’s mad about at least two things here. First, he doesn’t want senators investigating possible conspiracy between Russian espionage agents and the Trump presidential campaign in 2016. Second, he demands NBC verify everything through him, even that the Secretary of State called him a “moron.”

This brought a sarcastic response from Stephanie Ruhle of MSNBC, one of the reporters of NBC’s story.

“Sir, we didn’t need to verify that he called you a moron,” Ruhle said. “He did it behind your back.” She also said that her source told her Tillerson “didn’t just say that he called him a ‘moron.’ He said ‘a f—ing moron.’”

This brought a chuckle from anchor Brooke Baldwin on CNN.

And on The Lead with Jake Tapper on CNN, panelist S.E. Cupp took a more grave view of Trump’s attack.

Cupp said she hears intelligent people she respects “parroting what he says, so it’s a real problem.” She said “there’s a record distrust in the media, and the president is preying on that.”

A deeper observation of this appears in a new book titled One Nation After Trump. The authors, E.J.  Dionne, Jr., Norman J. Ornstein and Thomas E. Mann , explore the roots of the right-wing attack on the mainstream media since the era of Richard Nixon and Spiro Agnew.

“The road to ‘fake news’ was paved by the disdain in a large part of the conservative movement for real news,” they write. “The trail to ‘alternative facts’ was blazed by a mistrust of those whose jobs and professional ethics required them to report and rely on real facts… Disorienting the public by blurring the line between fact and falsehood, Alexander Hamilton warned, is the trick of the despot whose ‘object is to throw things into confusion that he may ride the storm and direct the whirlwind.’”

At her White House press briefing Thursday, Sanders threw more confusion into Trump’s whirlwind. She twice dodged questions about whether the president wants the Senate to investigate the news media. One questioner was Jim Acosta of CNN.

ACOSTA: “Sarah, why did the president tweet this morning that he’d like to see the Senate Intelligence Committee investigating news outlets, I guess in this quest to go after ‘fake news?’ Does he value the First Amendment as much as he values the Second Amendment?”

(The Second Amendment, citing the “right to bear arms,” is the excuse the National Rifle Association uses to assure crazed killers the right to own hand-held murder machines for gun massacres like the one in Las Vegas this week that left 59 dead ).

She went on to complain that only five percent of news coverage about the administration is positive. Sanders said the media spends too much energy on “petty palace intrigue.” She put on her stern face, like a substitute teacher in an unruly classroom. Sanders told those reporters how to do their jobs.

“We should call on all media to a higher standard,” Sanders said. “You have a lot of responsibility. And a lot of times, false narratives create a bad environment, certainly aren’t helpful to the American people. And you have a responsibility to provide and report fair, accurate details. And when we don’t, I think that is troubling for all of us.”

At the moment, all this seems like an academic side show or a playground argument. (“I know you are, but what am I?”) It likely will remain that way unless, perhaps, Trump starts a war and his public support spikes to 80 percent and he calls for martial law that includes a crackdown on news media.

Yes, the press sometimes gets censored during war. The Constitution gets compromised. You can look it up. On Thursday night, before dining with military leaders and their spouses at the White House, Trump stood for a photo op beneath a portrait of wartime president Abraham Lincoln.

He made an offhand remark to the media that sounded ominous.

TRUMP: “You guys know what this represents?”

TRUMP: “Maybe it’s the calm before the storm… We’ve got the world’s greatest military people in this room. I will tell you that.” 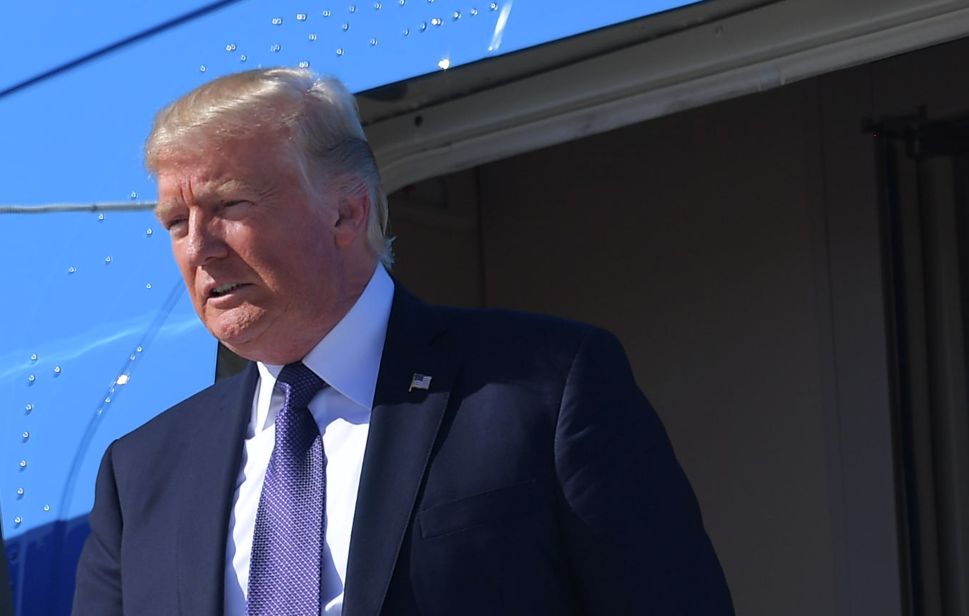