No, these subjects never came up. But if you watched Hannity Wednesday night, you did see the host introducing recorded Trump segments while standing in front of Air Force One wearing a white shirt, a light blue tie, a dark blue jacket with an American flag pin on the lapel and a big, fake smile on his smug mug.

He looked like the flight attendant eager to take “Mis-tah Trump” back to Washington from that Air National Guard base in Pennsylvania where they performed their sur-reality show before a studio audience of most white yahoos who cheered as Trump pandered to truck drivers and coal miners.

“I’m so proud of you,” Trump told Hannity, as if speaking to a young nephew. “I will say this: You have been so great. And I’m very proud of you.”

“What you are doing to your competition is incredible,” Trump said. “Num-bah one. And I’m very proud of you. And it’s an honor to be on your show. I have to tell you that, Sean.”

Shortly before that, Trump made a bizarre statement about the electoral college after bragging about how he defeated Hillary Clinton almost a year ago.

“I would rather have a popular vote,” Trump said. “For me, it’s easier.”

Clinton might agree with this. She got three million more votes than Trump.

One of Hannity’s few probing questions concerned the Russian espionage but in a narrow and distorted way. He sounded as if he were brokering an asylum deal for Julian Assange, the computer pirate who claims he didn’t get those stolen Democratic emails from Russians, as American experts have alleged.

Hannity spoke in his best faux solemn tone about Assange, the poor victim, who claims he can prove the Russians were not involved.

TRUMP: “The country has to know the truth…”

Before the nation could dissolve in laughter, Trump quickly veered into a long, familiar, self-congratulatory speech about how the whole Russia matter is a hoax dreamed up by the Democrats to make excuses for Clinton’s loss.

They spoke on a small stage in an airplane hanger decorated with American flags. At times, the mood resembled a pep rally, especially when Hannity led the crowd in call-and-response.

“What was your answer on Congress?” Hannity asked.

“What was your answer on the media?” Hannity asked.

As is always the case in a Hannity show, there was plenty of race-baiting. Both demagogues again criticized the pro football players genuflecting on one knee during the national anthem to protest the deaths of black people at the hands of police.

They both clucked their tongues about Chicago, which always means “black-on-black” crime in Hannity’s view, so why worry about a few people dead from cop bullets or other attacks when these people are killing themselves?

And there was plenty of times for Trump’s “law ‘n order” trope, which is as fresh now as when George Wallace used it in 1968. We all know what it means. Surprise! Trump took the side of the cops in the fight against crime.

On a larger scale, Trump warned about Iranians “dancing and screaming in the streets… and singing ‘death to America’” to celebrate the nuclear deal with the previous administration.

Trump scoffs at such negotiation, even to the point of undermining Tillerson on Twitter by saying talks are useless, even while T-Rex is bargaining.

“I’m building up the military like nobody’s ever seen,” Trump said. “Jet fighters… We have missiles that can knock out a missile in the sky.”

At another point of the conversation, when Trump was bragging about the economy, the sound of a bugle came from outside the building. His reaction proved he doesn’t do irony.

“Are they playing that for you,” Trump asked Hannity, “or for me?” 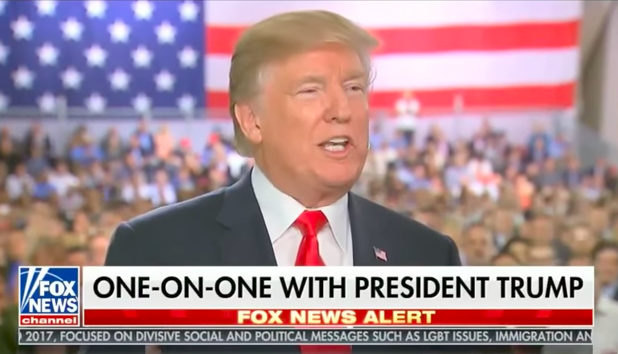