In a written correspondence on April 11th between Manafort and Konstantin Kilimnik (a Russian Army-trained linguist who started working for Manafort in 2005), the political consultant asked his protégé, “I assume you have shown our friends my media overage, right?”

“How do we use to get whole,” Manafort said. “Has OVD operation seen?”

Sources allegedly told the publication that the initials “OVD”  refer to Depripaska and that “V” references Victor, Depripaska’s aide.

The emails were sent just two weeks after Trump hired Manafort to lead his campaign, and were turned over by the campaign’s lawyers to investigators examining the Kremlin’s interference in the 2016 election. In a follow up email, Manafort asked for confirmation that Deripaska was paying attention.

“Yes, I have been sending everything to Victor, who has been forwarding the coverage directly to OVD,” Kilimnik responded. “In any case it will hugely enhance your reputation no matter what happens.”

“Our friend V said there is lately significantly more attention to the campaign in his boss’s mind, and he will be most likely looking for ways to reach out to you pretty soon, understanding all the time sensitivity,” wrote Kilimnik later that summer. “I am more than sure that it will be resolved and we will get back to the original relationship with V.’s boss.”

A week after Trump accepted the Republican nomination, Manafort received another email from Kilimnik with the subject line “Black Caviar.”

“I met today with the guy who gave you your biggest black caviar jar several years ago,” Kilimnik wrote. “We spent about 5 hours talking about his story, and I have several important messages from him to you. He asked me to go and brief you on our conversation. I said I have to run it by you first, but in principle I am prepared to do it, provided that he buys me a ticket. It has to do about the future of his country, and is quite interesting. So, if you are not absolutely against the concept, please let me know which dates/places will work, even next week, and I could come and see you.”

The Washington Post reported that “black caviar” could refer to payments.

“I need about two hours,” Kilimnik wrote Manafort on July 31st about plans to set up a dinner meeting in Manhattan on August 2nd. “because it is a long caviar story to tell.”

On August 19 2016, Manafort resigned as Trump’s campaign manager following a New York Times report that his name was listed in a secret ledger of cash payouts from the ruling pro-Russian party in Ukraine. This past July, the day after his hearing with the Senate Select Committee on Intelligence, his house was raided by the FBI at dawn. 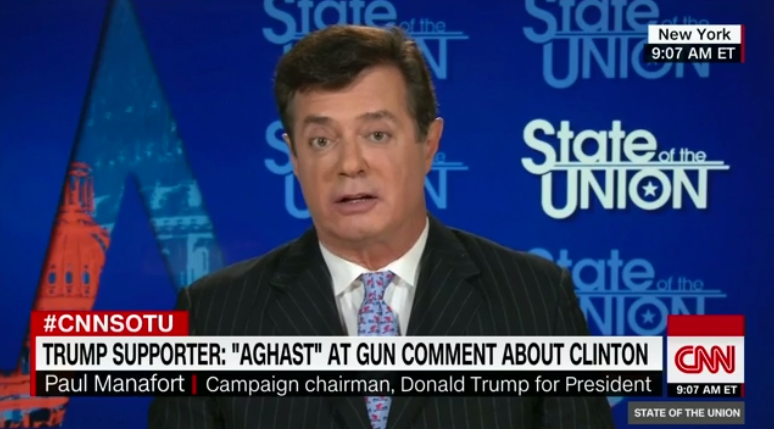