Eminem, like Elvis Presley before him, has made a career profiting off a musical genre with deep roots in black culture. However, the rapper has also always championed that culture and supported it throughout the years. Though his lyrics have always been controversial, he has made it a point to take hard line political stances and comment on the status of the United States during his 20-year career.

Now, the Hip-Hop star is using his platform to tear into President Donald Trump. On Tuesday night, he kicked off the BET Hip Hop Awards with a vicious a capella freestyle aimed at the Commander in Chief.

Eminem peppered his verse with clever rhyme schemes, rapping: “But we better give Obama props/ Cause what we’ve got in office now’s/ A kamikaze that’ll probably cause a nuclear holocaust.” In true Slim Shady fashion, the rap also featured some pointed punchlines: “Plus he gets an enormous reaction/ When he attacks the NFL so we focus on that and/ Instead of talking about Puerto Rico or gun reform for Nevada/ All these horrible tragedies and he’s bored or would rather/ Cause a Twitter storm with the Packers.”

He also attacked Trump’s past political cabinet and his questionable response to the Charlottesville riots: “From his endorsement of Bannon, support for the Klansmen, tiki torches in hand / For the soldier that’s black and comes home from Iraq and is still told to go back to Africa.”

As with the rest of Eminem’s career, his BET Cypher verse has stirred up a mixed reaction from notable fans and listeners.

Racism is the only thing he's Fantastic 4(fantastic for), cause that's how he gets his rock off, he's orange. Sheesh @Eminem!! 🔥🔥✊🏾🔥🔥#United pic.twitter.com/wcL28BCWpy

As a BW, it’s rtough to scroll and see vehement condemnation of of Eminem’s homophobia and misogyny by ppl who adore homophobic misogynists

After 27 years of doubts about rap I am now a fan.

Eminem lyrics about choking women, stuffing them in car trunk, calling them "sluts" and killing them. Brave freestyle on Trump tho.

Eminem literally gives the finger to any fan of his who voted for Trump, which is actually an act of risk-taking

This is hardly the first time the best-selling rapper has taken on Trump. Back in August, he led a crowd at the Reading Festival in a “Fuck Donald Trump” chant while on stage. While Eminem’s checkered past is rightfully up for debate, there’s no denying that this is a powerful statement from a white artist with an enormous sphere of influence. It’s also a direct challenge to fans of his who support Trump: “If you can’t decide who you like more and you’re split and you can decide who you should stand beside, I’ll do it for you with this: Fuck you!” 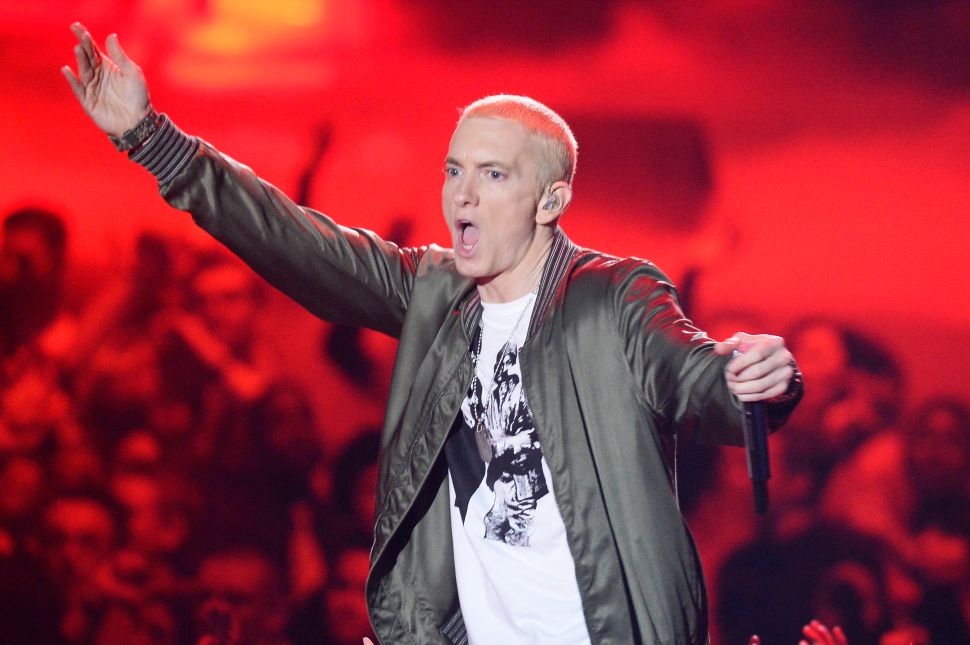