Last night, Jay-Z threw a Brooklyn fundraiser for Americans affected by Hurricane Harvey and Hurricane Irma—but Beyoncé still stole the show, without even hitting the stage. Seriously, she even opted out of performing a duet of “03 Bonnie & Clyde” with her husband at the Tidal X Brooklyn concert, where performers included Stevie Wonder, Cardi B, Chris Brown, Fifth Harmony, DJ Khaled and more.

It was, instead, Beyoncé’s stunning evening wear look that was the center of attention, despite the fact that it was slightly out of place at Barclays Center, which is home to the Brooklyn Nets and New York Islanders. For the charitable evening, she donned a custom emerald-hued gown by Walter Mendez, a Los Angeles based designer who seems to specialize in over-the-top gowns and heavily embellished bridal frocks. Jennifer Lopez, who performed at last night’s benefit, also appears to be a fan of the brand.

In an Instagram post, Mendez shared: “Could not have celebrated my birthday any better than to seeing the gorgeous @beyonce looking flawless in this custom #waltercollection design we created for her!” He went on to thank the pop star’s stylist, Zerina Akers, for making this jewel-tone look come to life.

The fitted frock wasn’t the only custom piece Beyoncé wore last night; her opulent golden earrings, featuring a dangling string of gold coins and what appears to be a smattering of pearls and some cabochon emeralds, were created alongside bauble genius, Lorraine Schwartz. The longtime Hollywood jewelry whisperer was also on hand for the Tidal concert—and posted a few Instagram videos from her perch well above the crowd.

The other major sparkly accessory that Beyoncé wore was a clutch created in collaboration between Alexander Wang and Judith Leiber. Yes, this is an unlikely pairing, but the Swarovski-studded roll of hundred dollar bills, which first debuted on the designer’s Spring 2018 runway this past September, can only be described as utterly brilliant. Made from 10,263 crystals, the clutch is even secured with a genuine rubber band, cementing this accouterment’s status as authentically OG. Oh, and it will cost you $4,995, that is, if you can get your hands on the limited edition design.

Finishing off her look, Beyoncé donned a pair of sparkling Christian Louboutin heels and a purple fur coat, to round out the gemstone-inspired outfit. So, the next time you get dressed for a night out, take a hint from Bey and consider skipping the black dress for something a bit…richer. 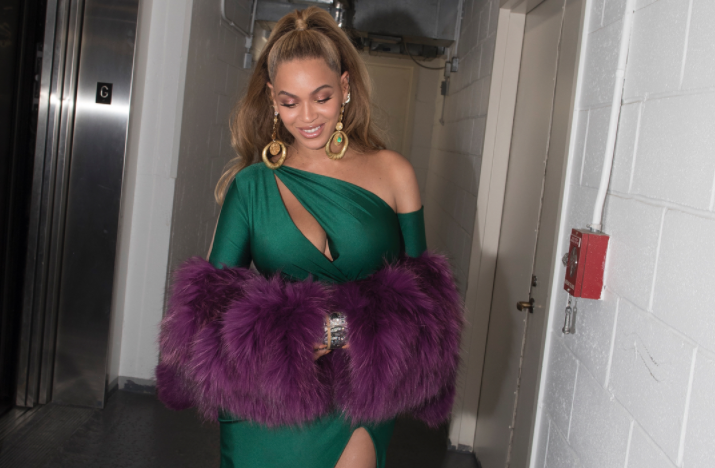