Athena Calderone, best known as EyeSwoon, is a design-influenced Instagrammer who posts gorgeous pictures of her recipes and home. But this fall, she’s branching out as a cookbook author with Cook Beautiful, a seasonal look at dishes, all of which are ideal for entertaining.

Many of the recipes are inspired by Calderone’s trips around the globe. For example, the Cardamom-Cognac Apple Cake she made for the Observer was inspired by her time spent in Morocco.

“The first time I went to Morocco was when my son was two or three, we’re talking a good eleven years ago,” she explained. “I fell in love with so many cooking techniques and flavors that I hadn’t experienced before. I also started drinking cognac for the first time and discovered cardamom, [both of] which is in this recipe.”

Her travels also inspire her Instagram feed and her design blog. “Travel has informed so much of that, discovering new, foreign flavors and coming home and testing those out in my kitchen. I’m such a visual person that flavors and visuals work in tandem for me,” she told us.

After Calderone whipped up a cake, she told us more about creating her cookbook and revealed the secret behind taking the perfect food photo.

In the kitchen… The place I feel most like myself. Where I trust my creative instincts, where I workshop ideas and develop flavors. Where I learn, grow and expand my technique and knowledge surrounding food. Where I find the purest joy I know . This Thursday October 19th, I will get into the Columbus Circle Williams Sonoma kitchen to demo three recipes from Cook Beautiful with @daphneoz Link in bio to purchase a ticket which included a book — I’d love to meet you, chat with you, and sign a copy of #CookBeautiful. Photo : @johnny_miller_ @wscolumbuscircle

Aside from Morroco, what are some other destinations that inspired recipes in the cookbook?

I traveled to Sicily and tried so many interesting flavor profiles. One dish in the cookbook is a swordfish that has spicy vinegar soaked raisins with almonds. That combination of sweet and sour and crunchy is something I first discovered when I was in Sicily. Spain informed so much, like small bites. The first time I ever had paella was in in Ibiza.

What are your tips for the perfect food Instagram?

I always love to shoot in natural light.

So you usually take dishes outside?

I do. I usually have a marble surface and I have a couple of plaster surfaces. I’m usually shooting in my home kitchen and I just take them outside and put it down on the floor so I can get over it. I really like to make sure I create some negative space in a photo.

How do you create negative space?

Look at the composition of things; it shouldn’t feel too cluttered, but make some things overlap. Like if you have dishes or a napkin, put the dishes on top of the napkin or have cups next to one another, but make sure there’s empty space below it. Just like when you’re designing your accessories on a coffee table or a credenza, you want some things to be high, some things to be low and some things to have negative space. Because my background is in design, I feel like I approach food in exactly the same way, making sure the composition feels balanced. I like this idea of broken symmetry, a lot of times I’ll make something symmetrical and then I’ll kind of fuck with it.

So here we are, September 1. On today’s ES we’re sharing some inspiring outdoor spreads to help you bid summer adieu in the loveliest Labor Day style. Whether you’re dining by land or by sea, or anywhere in between, below are some clever and crazy-pretty ideas to adopt for your own gathering. Link in bio Photo : @selliottphoto for ES

Are there any apps you recommend for editing photos?

There’s this app called Snug, you can preview your Instagram, the way it looks in your feed before you publish. I often cool my photos down a little bit especially if I can’t shoot outside and the image is too warm. In winter, I’ll cool them down more. In fall, I’ll keep them warm because I really love to be inspired by what’s happening seasonally. The color and hue that’s attached to each season kind of mirrors the ingredients, the way I gather and the way I cook.

A lot of the recipes in the cookbook are perfect for entertaining. What’s your go-to dish when you’re hosting at your home?

For winter, I love to make a simple roast or a braise because a roast you just pop it in the oven. Then something you braise you can cook the day before, because it always tastes better the next day.

If you’re going to a party, what dish do you bring along?

I always love to bring some sort of fruit tart. The pear tart recipe is actually the first dessert I ever baked for a dinner party and it’s always the one I bring to dinner parties. The chocolate souffle cake with earl gray and a kumquat sauce is something I made the first year my son went to school, for a potluck dinner. I made it for a good five years for his school, and one year I got all excited because I got this fancy whip creamer and was kind of showing off to show everybody. I squirted it and I wasn’t holding it the right way. Whipped cream exploded on the walls and on the ceiling. I like to hand whip now; I stick to the basics.

Here’s a recipe for the Cardomom-Cognac Apple Cake, in case you want to try it at home—and Instagram it, too. 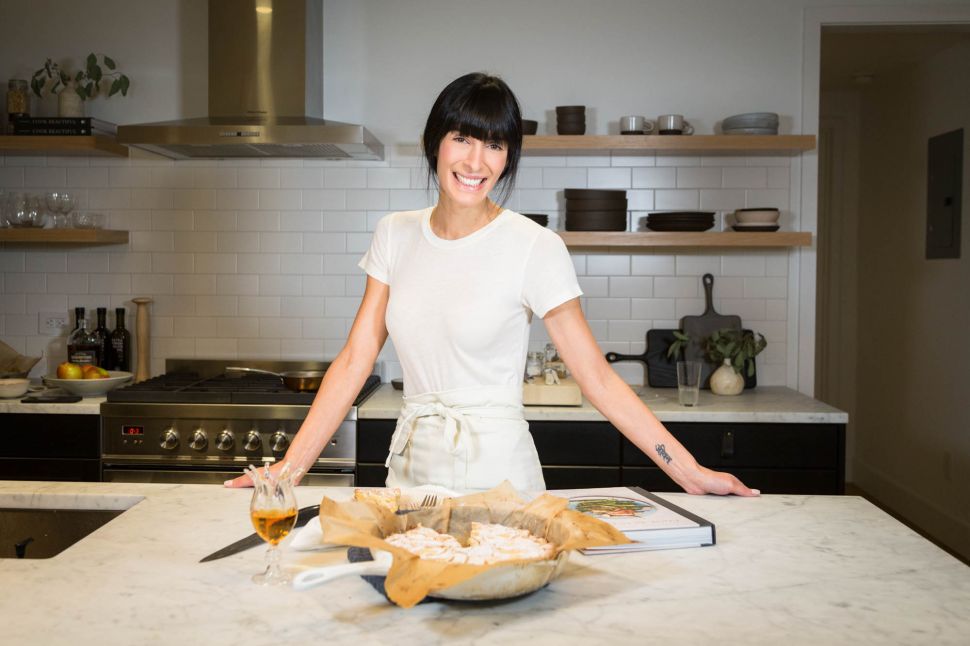