In generations past, New York artists might meet up to drink, talk and occasionally misbehave at the Cedar Tavern (abstract expressionists) or Max’s Kansas City (Pop artists) or the Spring Street Bar (minimalists and conceptualists). Where do they get together now, the faculty lounge? Or could it be at the National Academy? Currently located at 89th Street and Fifth Avenue, its two beaux arts buildings are up for sale and a new location is in the works—probably somewhere farther down town, closer to the city’s shifting art center.

The National Academy is three institutions in one. It is a non-degree-granting art school that offers individual classes, as well as a two and three year certificate program, a museum, displaying its collection of paintings, prints and sculptures by the various artists who have been members of the Academy since its founding in 1825 and a sort of club where artists hold periodic meetings to discuss club business and whatever else. This isn’t Planet Fitness. You can’t just become a member of this group by walking in and signing up. Artists who want to join need to be nominated by a current member, seconded by three other members and then voted on by all the members who judge their work to see if they are worthy.

“When I first thought about becoming a member, I pictured a club with overstuffed leather chairs, people smoking cigars and playing cards over a felt card table,” said painter Julie Heffernan, a member since 2011 and on the Academy’s school committee. It’s not that kind of club, something from the Age of Trollope, but more like a Rotary Club for artists where there is Academy business to attend to and events in which (in this case) artists get together. “As artists, we all work alone, and it is good to have somewhere to go where you see other artists.”

She is not alone in that feeling. “You go inside and see works by all the famous artists who have been members,” said artist Andres Serrano, who was elected in 2015. “It’s a great honor to be in that company.” He added that, “the club part is most important to me.”

Certainly, it wasn’t always that way. It is difficult to imagine any of the abstract expressionists being invited in, or that they would have sought an invitation. “For years, there was an old guard feeling to the membership there,” said painter Tom Burckhardt, who was elected last year. “It grew up as a reaction to Modernism and, for a long time, had a circle-the-wagons vibe to it.” He had hardly ever been to the National Academy to see its permanent collection or special exhibitions, before becoming a member, which was a story repeated by many of the other newer members. “The membership has been changing and becoming more interesting. It’s no longer just old white guys but representing a more contemporary idea of diversity.”

Many of the earliest members of the National Academy form a who’s who of 19th century American art, including William Merritt Chase, Frederick Church, Thomas Cole, Thomas Eakins, George Inness, Emanuel Leutze and John Singer Sargent. It was formed in reaction to the more conservative American Academy of the Fine Arts, which emphasized neo-classical training and subjects. An old-guard reviewer of the National Academy’s 1833 annual exhibition in American Monthly Magazine condemned the focus on landscape painting, noting that, “The study of landscape, though calculated to elevate the mind by the contemplation of the beauties of creation, is neither so sublime in itself, nor does it rank so high in art as historical painting.” Bunch of Young Turks, it would seem.

Still, what’s new becomes old and experimentation became dogma. Like the royal academies of painting and sculpture in France and England, which held annual juried exhibitions of their most prominent artists, the National Academy, although always an artist-run group and never part of the government as were its European counterparts, became associated with conservative styles of art, gaining art historical renown for the artists it rejected and then the artists who rejected the Academy. In the 1870s, older, more conservative academicians refused to hang the paintings of younger, European-trained and more progressive entrants into the shows at eye level—an 1879 comic in Scribner’s Monthly showed visitors to the show on stilts looking at paintings hung near the ceiling—and other artists’ work was wholly rejected. In 1877, the Academy created a new rule guaranteeing academy members preferential treatment in the selection and hanging process, which led to the forming in that same year of a break-away group, the Society of American Artists, led by Augustus Saint-Gaudens and several other artists who sought a more progressive outlook.

The power of the Academy declined dramatically in the early 20th century. Academy member Robert Henri became so enraged at the jury’s rejection of the work of more progressive artists, including a number of his close friends and students (Arthur B. Davies, William Glackens, George Luks, Ernest Lawson and John Sloan) in 1907 that he organized a separate secessionist exhibition in early 1908 of what became known as the “Ashcan School” of painting. The work of those five artists, as well as that of Everett Shinn, Maurice Prendergast and Henri himself, gained in prominence over the years, while the Academy’s reputation sank. After the artist-organized Armory Show of progressive American and European art in 1913, the power of the National Academy to exercise control over the art market was rendered negligible, and its annual spring show became just one of many exhibits taking place in New York City, usually panned by the New York media. New York Times critic John Russell’s response to the 1988 annual is typical of the time: “The show is characterized by a virtually uninterrupted niceness. There are nice landscapes, nice townscapes, nice interiors, nice still lifes, nice nudes, nice straightforward sculptures…and nice scenes of socializing.”

When painter Gregory Amenoff became a member in 1993, nominated by several artists who wanted the Academy to take a different direction, he “wasn’t interested in the Academy. I was aware of the building, but the Academy wasn’t on the radar of contemporary artists, people who were born in the late 1940s, ‘50s or ‘60s. People of my age weren’t interested.” Amenoff was elected president of the Academy in 2001 and found that “the average age of the members was in their late 70s. It was typical of an aging institution that it hadn’t renewed itself.”

He recalled the four years that he was the organization’s president as exhausting, filled with battles with board members and other artists (“a bastion of maintaining certain conservative standards that weren’t engaged in what’s going on in the 21st century art world”), but he and others were able to reorient the National Academy to include different media (not just painting, printmaking and sculpture but photography, installations and new media), as well as newer, younger artists in the organization’s annual invitational exhibition and as part of the membership.

New members also bring up new ideas. Sculptor Lynda Benglis, a member of the National Academy since 2012, said that she would like the place to be even more of a club. “I’d like to see more parties, more drinks, more food, more young people.”

The current site of the National Academy still maintains the school and is where members meet, but the museum itself is closed to the public. The sale of the two buildings should bring in a substantial amount of money, enabling the Academy to buy or build another “that will function better with contemporary art,” said painter Melissa Meyer, a 2010 elected member, “and establish a real endowment that can’t be fiddled with.” (The finances of the Academy have been in disarray for a number of years.)

A 192-year-old institution is finally being brought up to date, but the language of membership still may seem old school. Elected artist members to the Academy are called “academicians,” and they become full members after donating one of their artworks to the permanent collection, referred to as a “diploma piece.” Academicians presumably create academic art, suggesting old style and official approval, which few artists today want to be associated with. Heffernan noted that “the word ‘academician’ is really problematic. No one I know relishes that term.” Serrano was adamant in saying that “I’m not an academician,” and Meyer stated that Martin Puryear “was worried about the word and has shied away from it.” For her part, however, Meyer has fewer problems with it, noting that a larger percentage of artists today than in the 1940s and ‘50s do teach in colleges and universities—the academy—and that “’academician’ is not in conflict with artist, at least I don’t think so.” 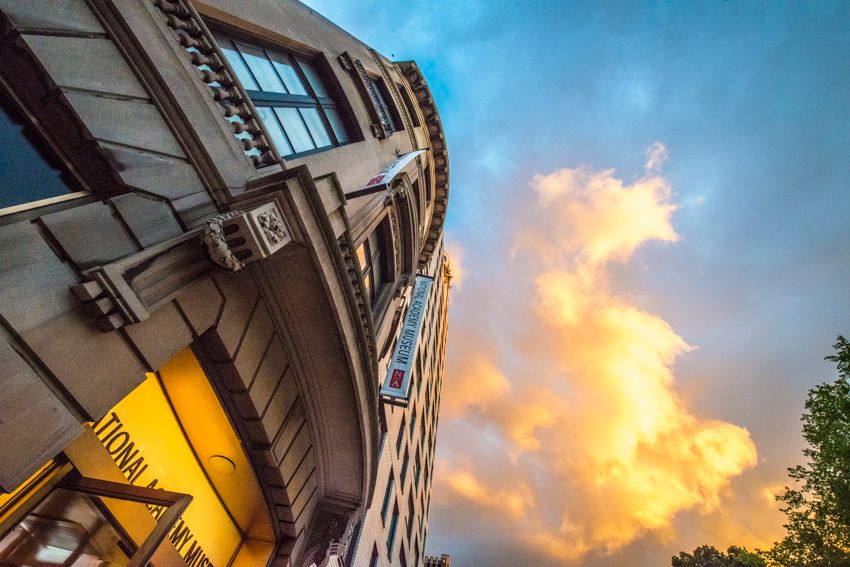