When one appears on Game of Thrones for more than an episode, they risk being associated with that role until the end of time (or The Long Night, whichever you prefer). That’s not necessarily a bad thing as there are far worse fates than Kit Harington being known the world over as Jon Snow. But as a professional actor or actress, it can be difficult to shake your reputation free of the all-encompassing death grip Game of Thrones holds as the world’s most popular series. After all, the night is dark and full of terrors…like typecasting.

But for Oona Chaplin, who played Talisa, Robb Stark’s wife, that isn’t a problem. Chaplin has followed up her time in Westeros with a series of far-ranging roles that run the gamut of the performance spectrum. From off-beat TV series such as Netflix’s Black Mirror and FX’s Taboo to a big role in the upcoming Avatar sequels, Chaplin has been genre-hopping enough so that it’s impossible to put her into just one box.

“Stories are really important tools for us to evolve,” she said when the Observer asked her how she chooses which projects to take on. “If I read something that moves me to a place I can’t describe then that’s how I do it. I want to be a part of stories that move people somewhere and change things. Most of the things I’ve done have felt like that. I’m very fortunate that they’ve gone my way and I’m absolutely baffled at how my career has gone. I have no idea how it happened.”

If it’s emotion Chaplin feeds off of, it’s easy to see how she ended up in her latest project, Realive, in theaters now and available on VOD and Digital HD October 3. The movie revolves around a terminal 32-year-old man who opts to freeze himself rather than live out his remaining days with his wife. Revived sixty years later, he finds that his body is cured but that the soul is much harder to heal.

“Realive for me was all about character development. It was one of the most intense and beautiful journeys that I’ve been on. I really feel that this girl and I became one and it was beautiful to explore this character…If you look around at the world and you’re fucking confused about what you see then go watch this film and it will let you sit with the confusion and just let it be.”

You’d be hard pressed to find anyone who isn’t confused by the world around them right now.

“All I can say is that she is my greatest challenge yet. She is really remarkable.”

To most of us, starring in Game of Thrones, Avatar and a handful of really interesting projects in between would bring enough happiness for a lifetime. But Chaplin has a bit more on her mind than just her IMDb page.

“I think I’m living the dream right now,” she said. “I’m in a really beautiful project with people that are in the top of their game and are so creative and inspiring…The only thing missing is less chaos in the world.”

That’s an attitude that fits right in with the Na’vi. 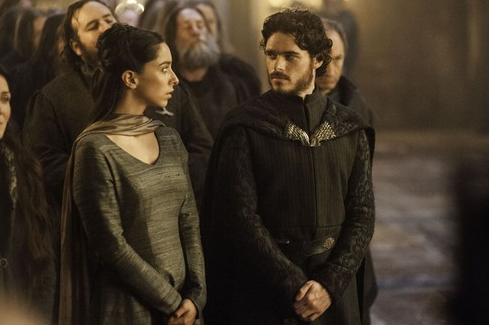