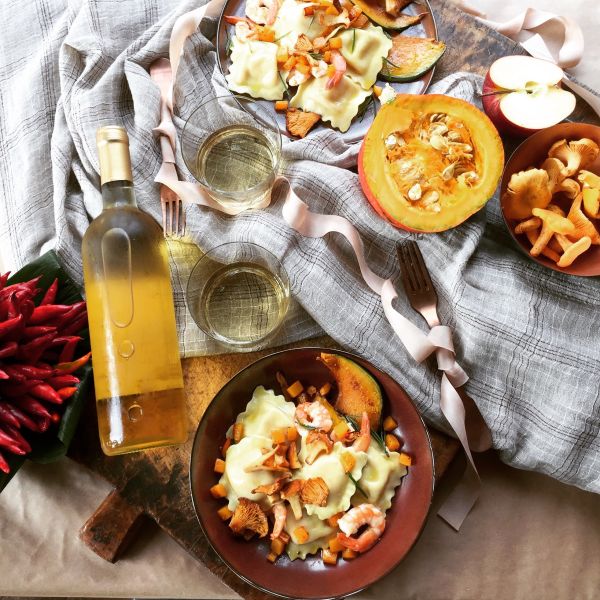 The minute you tell an Italian that you met the actual Giovanni Rana, his or her face will light up as though you just said you had coffee with Santa Claus and thereby confirmed that he is, in fact, real.

Everywhere you go in Italy, you are greeted by the warm presence of the famous fresh pasta-maker. The 79-year-old’s caring smile is on giant billboards and humble pop-up ads in city squares. Jingles for his company have echoed through generations of children glued to TV screens. When he shimmies down the street with his adorable little walk that resembles that of a wind-up toy, he’s swarmed by people asking for selfies, to which he always graciously agrees. He is so famous that one survey showed he was the second-most recognized man Italy, behind only the pope himself. 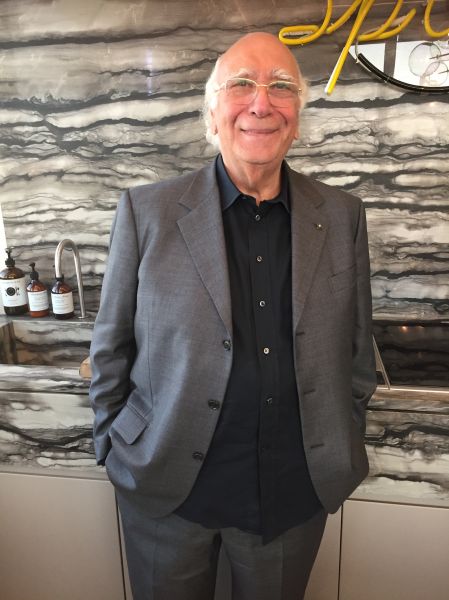 Sitting beside him on a warm day in late September, it is impossible not to see him like the quintessential grandfather. Despite owning a global pasta industry that has a net worth of approximately $690 million, Rana still speaks hardly any English. If one visits the Giovanni Rana factory near Verona, Italy, you’ll soon notice the man has quite literally boxed himself into his factory. His house (which is surprisingly modest) and pool (nearly twice the size of the house), are completely encircled by the old factory and the new complex, so that he is, as his staff jokes, the filling inside the ravioli. It’s an apt symbol for this family that owns this business, for whom the line between work and personal life does not exist.

Like most good stories, Rana’s has a humble beginning. Born near Verona, Rana went to work with his brother at a bakery at the age of 13, and quickly fell in love with the art of making dough. When he met his wife, it translated into a love of pasta, and, in what sounds like the most idyllic partnership ever, they began crafting the perfect tortellini together; she making the filling, and he making the dough. Armed with nothing but a red scooter with a basket on the front—in which he used to also carry his small son, Gian Luca—Rana began delivering his pasta door-to-door. When he told his mother of his pasta-making dreams, she told him it was ridiculous and that he would come home in tears. It must be the one time in history that an Italian mother was actually wrong.

Rana remembers the exact date of his first invoice: March 28, 1962. Something interesting was happening with women in Italy at this time. They were becoming more and more liberated from the kitchen. And yet, stores still only sold fresh-filled pasta on Saturdays. As anyone who’s ever taken a class would know, making pasta is a long and arduous process. Having been raised by women after losing his father at a young age, Rana dreamt of creating a product that would enable a working woman to feed her entire family without having to start from scratch, enabling her to save time without sacrificing quality. As a result, Rana has become a somewhat unlikely symbol in Italy of the female emancipation movement.

Soon, Rana became a household name, and now an Italian might say “I’m going to have a plate of Rana tonight” to mean tortellini in the same way that an American might say “Hand me a Kleenex” to mean a tissue. As the company grew, Rana thought of expansion, but he was, as he describes himself, “a simple bakery boy with no idea of business.”

Luckily, his only child, Gian Luca, 51, who is the chief executive of the Rana Group, decided to take over the family business and spread it all on the globe. Now, the brand operates in 38 different countries, and has set their sights on Japan and Australia next. Gian Luca takes particular pride in the way they tailor their tastes to the cuisines of their countries of distribution. Their wide-ranging line of products include classics like Spinach and Ricotta Ravioli (Rana’s first recipe), Cheese Lovers Tortellini and Mushroom Ravioli, but they also have recipes with caramelized onions for Spaniards, duck for the French and rosemary chicken for the British. Gian Luca takes even more pride in the fact that they often take these products back to Italy, creating a sort of cross-cultural connection through pasta, a tortellini diplomacy of sorts.

When I ask Gian Luca how he tailored the products to an American audience, his eyes light up like a mad scientist, because now he gets to talk about “The Machine.” Rana opened its doors to America four years ago with a flagship restaurant in New York’s Chelsea market and a factory in Chicago. In true Italian optimism, they opened the factory before they even had an audience (recalling the story of how the Italians built a tunnel through the Alps before there was even a train to run through it).

In the process of market research, Gian Luca found that Americans, with their wide variety of tastes and ethnicities, were not quite as easy to please as their European counterparts, but one variable was a clear winner in focus tests: Americans wanted their pasta to have a very soft, creamy filling, but with lots of chunks. This presented Gian Luca with an exciting challenge.

The Rana family had always prided themselves on being able to making their pasta with the thinnest dough in Italy. They hold the world record (0.2 mm) though they use 0.5 mm in their products because otherwise the cooking time would seem too short. To make the tortellini creamy and chunky without breaking the dough would require totally reinventing the technology they used. And so, at the cost of 5 billion dollars, Rana created machines that could tie the tortellini together perfectly and spit them out at a rate faster than the human eye can see, enabling them to produce roughly 100,000 tonnes of pasta per year around the world. Walking around the plant and seeing “The Machine” in action, and observing the maniacal love with which Gian Luca looks at it, it’s impossible not to feel like you are with the pasta version of Willy Wonka in his factory.

The amount of attention to detail and passion his family puts into their work is sometimes astounding, but it has certainly paid off. Rana is opening a second factory in Chicago this year–their biggest outside of Italy. Giovanni Rana’s pasta is free of preservatives, which is somewhat of a feat in the chemical-obsessed United States food industry. Rana takes great care of the ingredients inside the pasta, and every taste-tester in the factory must be able to tell the difference between a porcini mushroom and a portabella simply by the smell.

Because the pasta is fresh, as opposed to dry, it has an expiration date and cannot be imported from Italy, but Gian Luca makes sure to approximate the U.S. versions of his Italian ingredients as closely as possible. Early on, for example, he had a hard time finding a supplier for ricotta, which in America tends to be filled with gum, but he ultimately prevailed. For some items, however, there can be no substitute; the parmigiano reggiano, pecorino romano, and fresh basil are brought to the factory from Italy.

A lot of businesses claim to be family-owned, but not very many are truly family-run, like Rana. Gian Luca’s wife, Antonella, a bubbly and hilarious woman with all of the beauty and charm of Monica Belluci, handles much of their global PR and marketing. I first met her last year at a pasta-making demo in New York and was taken aback by her sheer Italianness, the way she would expertly knead the dough with her floured hands and use the back of her wrist to wipe away the strands of raven curls bouncing over her brows, the way everything about pasta—making it, serving it, eating it—was like sex. “Passion and love are the key ingredients in pasta,” she said, in a way that somehow doesn’t sound cheesy.

The Rana family is also known for hosting regular sweepstakes for customers to win a trip to Italy, and has brought over hundreds of Americans in the last year. It’s hard to believe such a costly trip has any real economic impact for the brand, but as I look around the tonga line of drunk, happy Italians and Americans snaking through the food festival the Rana family are hosting in their private home, I can’t help but feel like for them it really isn’t about the money. It’s about making the best pasta there is and sharing it with the world.

Diana Bruk has written extensively about dating, travel, Russia-American relations, and women’s lifestyle for Cosmopolitan, Esquire, Elle, Marie Claire, Harper’s Bazaar, Guernica, Salon, Vice, The Paris Review, and many more publications. As the former Viral Content Editor at Hearst Digital media and fellow at Buzzfeed, she also has a special understanding of the Internet and vast experience in human interest stories. You can learn more about Diana on her website (http://www.dianabruk.com) or Twitter @BrukDiana 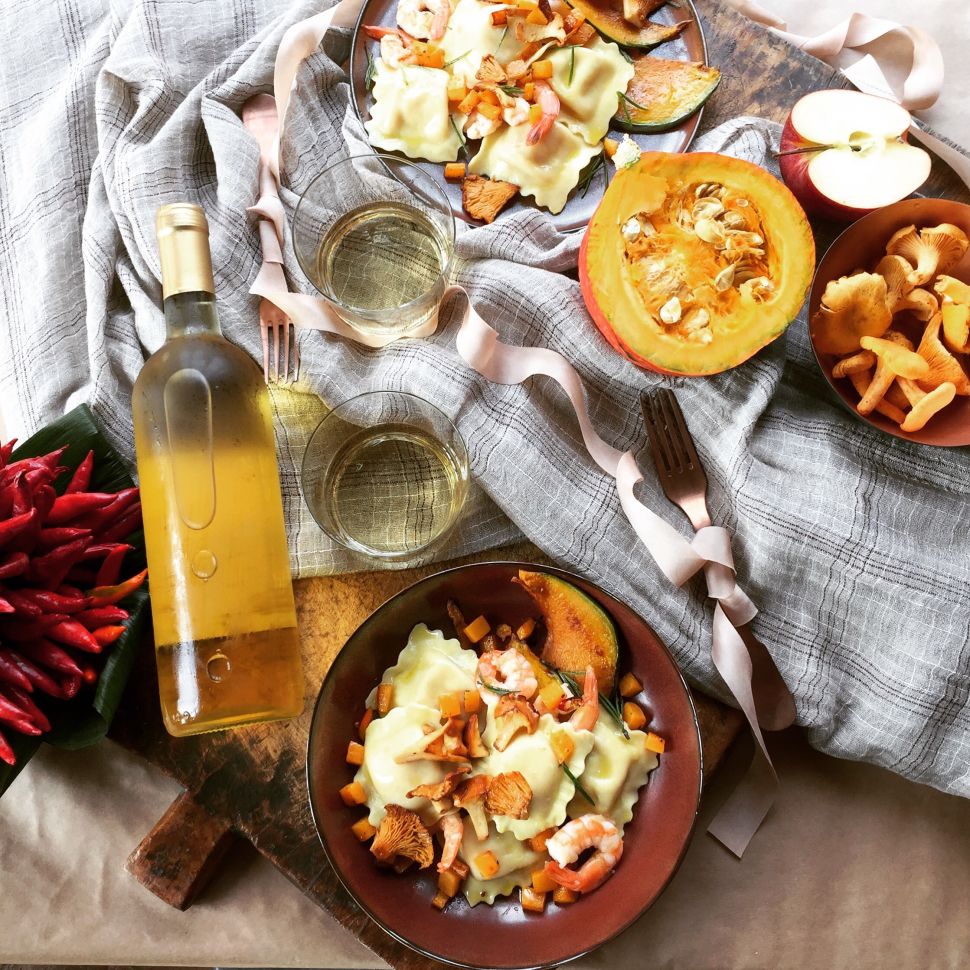