As the House prepares to vote on a tax overhaul that includes a repeal of a popular state and local tax deduction, experts, congressional lawmakers and advocates warn that the impact would be felt by the middle class in New York City and the rest of the state, which has one of the highest tax burdens in the country.

President Trump and House Republicans’ tax plan, which they plan to release on Nov. 1, would end the federal deduction for state and local taxes, also known as SALT. That tax break enables people to deduct state income taxes and property taxes, and has been in place since the federal income tax was instituted in 1913.

A repeal would hurt families in high-tax states like New York, California and New Jersey. Republicans argue that getting rid of SALT would enable them to come up with more than $1 trillion to finance tax cuts over a decade.

The SALT repeal would lead to a $7.1 billion tax increase for more than 1.1 million taxpayers in New York City, according to a New York State Department of Taxation and Finance analysis of 2010 Federal Statistics of Income. A report by the Rockefeller Institute of Government found that New York sent $48 billion more in taxes to the federal government in federal fiscal year 2015 than it received in funding.

In a September analysis, Gov. Andrew Cuomo said 3.3 million New Yorkers would see their federal income tax liability increase by $17.5 billion. On average, the governor’s office found, New York taxpayers would have to pay $5,300 more in federal income taxes. Nationwide, about 44 million Americans benefit from the deduction, and a repeal could lead to more than $1 trillion in losses for taxpayers and their local communities.

The repeal would hit the area that includes Albany, Troy, Schenectady and Saratoga particularly hard. In that region, 165,000 people — or 31 percent of taxpayers — would pay $3,088 more in federal taxes on average. Across New York, the deduction loss would come out to roughly $68 billion a year.

“Look, I think the reality is if our entire congressional delegation does not support this and won’t vote for it, then it should not pass,” Deutsch added. “I certainly wouldn’t wanna be supporting this and have to go seek reelection next year.”

Rep. Dan Donovan, a Staten Island Republican and Trump supporter who has sometimes disagreed with him on issues such as immigration, told Observer that he is focused on changing the tax code, which he said is “complicated” and “unfair.” But he said that they are trying to find a solution that would be good for New Yorkers and for the rest of the country. He spoke of tax burdens that are crippling families and the economy.

“It’s a number one concern for myself and many of my Republican colleagues in the House from New York who are very concerned about how any elimination or deduction would harm New Yorkers,” he said.

He said that he has personally spoken to Treasury Secretary Steve Mnuchin and Gary Cohn, director of the National Economic Council, to inform them that eliminating SALT “could be harmful to the people of New York” and that they told him they would “come back with some proposals, with some numbers.”

Donovan said there are various proposals being floated, including an option that would retain the SALT deductions for people under a certain income.

“There’s a lot of proposals and I’m negotiating with the administration and with the leadership in the House to do what I think will be best for the people of New York City,” Donovan continued.

Rep. Peter King, a Long Island Republican who is also a Trump supporter, told Observer that the House leadership unveiled the general goals of the tax bill to the entire delegation and GOP conference in September and casually mentioned eliminating SALT. After he and others raised concerns about it, they told them not to worry and promised more work on that aspect of the tax package.

Since then, he said, one meeting has been held in House Majority Whip Steve Scalise’s office with Republicans from New York, New Jersey, California and Virginia. Conversations have been “limited,” King said. Meanwhile, he added, Republican leaders have been meeting with other parties whose states would not be as deeply affected.

“Neither Donovan nor I have been invited to any of those meetings,” King said. “The whole fight,” he said, would be unfolding today, when the House takes up a budget. “If we could stop the budget, then that stops the tax bill. If they get the budget through, then they’re just going to ram the tax bill through after that.”

King blasted Republicans who are arguing that the SALT deduction is a special subsidy to New York, noting that they come to Manhattan and to the Hamptons to hold fundraisers.

In a rare public appearance this week, Cuomo and Senate Minority Leader Charles Schumer launched a statewide push across congressional districts to urge New York’s delegation to oppose the SALT repeal. The governor said he believes King and Donovan will stand up to their leadership.

Max Hadler, senior health policy manager for the New York Immigration Coalition, told Observer that ending SALT is damaging to anyone who pays state and local taxes “in the sense of raising their tax burdens.”

“The level of tax cuts that are being proposed and the budget cuts that would have to come along with it would be devastating to the vast majority of New Yorkers, particularly low- and middle-income New Yorkers,” Hadler said. 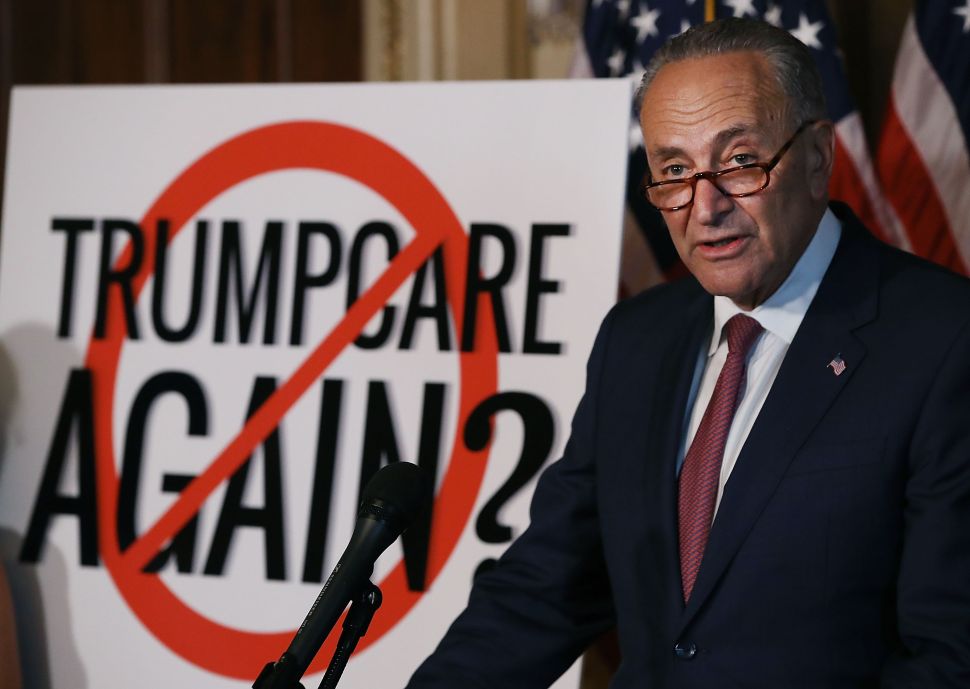