The Walking Dead is in a bit of a predicament. But you wouldn’t know it just by looking at the raw numbers. Last week’s 8th season premiere garnered an impressive 11.4 million viewers, and it’s still the top-rated show on television in a key demographic. It also has a massive imprint on social media, trending on Twitter pretty much every time it airs.

But a closer look reveals what very well could be a disconcerting trend. This season’s premiere’s eleven million viewers is a steep drop from the 17 million who tuned in for last season’s premiere. It’s in fact the worst performing season premiere since Season 3, back when the series was still building what would quickly become a massive fan base. By some appearances, a good chunk of that fan base is still intact. But their beloved show could be running out of gas, at least enough to leave some fans asking: What exactly is The Walking Dead’s endgame here?

Full disclosure: I’m a fan. I came to the series a bit late—bingeing the first couple seasons while I was bedridden with removed wisdom teeth. The show has plenty of issues with pacing, and other things I can’t always defend. But at this point I’ve invested enough time that I’m genuinely curious what’s going to happen to these characters.

Therein lies, I think, The Walking Dead’s big problem. “What’s going to happen to these characters” is death. A lot of death. Sometimes heroically (if they’re lucky), almost always gruesomely. If this wasn’t apparent to its audience before, it definitely was after last season’s premiere, when the aforementioned 17 million people tuned in to watch not one, but two beloved characters get beaten to death in front of everyone with a baseball bat wrapped in barbed wire. Viewers even got to watch helplessly as The Walking Dead’s most good-hearted and morally pure character, Glen, struggled to speak with a fractured skull and dislodged eyeball, before he was finished off for good. Oh and all of this was captured in unflinching detail, leaving nothing to the imagination. Does this sound like it was fun to watch? It was not. At all. So much so, in fact, that it seemingly kickstarted the series’ decline in viewership as many fans decided this was not really something they ever cared to see again.

But it’s not just that The Walking Dead is going to kill every character you love—it’s going to do so while following a formula that has been cycled through now multiple times. It goes like this: Our heroes are confronted with a threat, they fight back and neutralize the threat, and everything is hunky dory for a little while. Then they’re confronted with another—slightly worse—threat, they fight back again, they neutralize the threat, and everything is hunky dory. Then they encounter an even worse threat. And so on. Currently Rick and the gang are facing off against Negan, the biggest and baddest threat yet. I’ve steered clear of the comics the show is based on, so as to remain un-spoiled, but I have a hunch they’ll soon finally beat Negan. Then things will be great again, until something even worse than Negan comes along. At some point, if it hasn’t already (and the evidence suggests it has), The Walking Dead becomes little more than an endurance test to see how much of this a person can endure before parting ways with it. Me personally? I probably have a couple more cycles in me. But you never know.

Here’s a fact: At some point, The Walking Dead has to end. This will happen for one of two reasons. A) Either the show will be canceled upon finally hemorrhaging enough viewers that it’s not worth AMC’s trouble—or money—anymore. Or B) The creators can end The Walking Dead on their own terms, similar to how Damon Lindeloff and Carlton Cuse did with Lost over a decade ago, announcing an end date three seasons out. Unlike Lost, however, The Walking Dead’s reality-based universe doesn’t really have the same narrative wiggle room to really let its freak flag fly with time travel, or alternate dimensions, or smoke monsters or whatever.

If The Walking Dead is locked into a predictable pattern, it’s because that’s the relatively small box of tools it’s worked with for the last seven years. And it’s boxed in even more by the show’s unrelentingly bleak ethos, which can be summed up as: Zombies are bad, people are worse, and doing the right thing will usually get you killed. As a fan, I’m curious about how this show will end, but I can’t envision what that would possibly look like outside of our heroes (or whoever’s left of them) settling upon a new safe haven—maybe their most promising yet—and the audience left wondering what kind of bad guys will inevitably come along and ruin all of this for them somewhere down the line. There are some things keeping viewers from straying too far—good actors playing interesting characters among them—but there’s no central mystery or obvious end point The Walking Dead is building to. We’re still in the dark about what, precisely, caused the initial outbreak that’s reanimating corpses, but the creators have already promised us they’re never going to introduce any kind of cure into the show’s plot. And even if there was, civilization is so fractured and devastated at this point, it wouldn’t really matter.

The great irony here is that right now, plot-wise, should be when The Walking Dead is most gripping—and at times it is. Anyone who’s survived the zombie apocalypse for this long has to be smart, resourceful, and interesting enough to still be alive. And that’s fun the watch. Meanwhile the zombies themselves have slipped into the background, replaced more and more by the real threat of warring factions of survivors all trying to outlive and outgun each other. But the longer this drags on, the more viewers The Walking Dead will lose until it reaches its (hopefully not too gruesome) end. 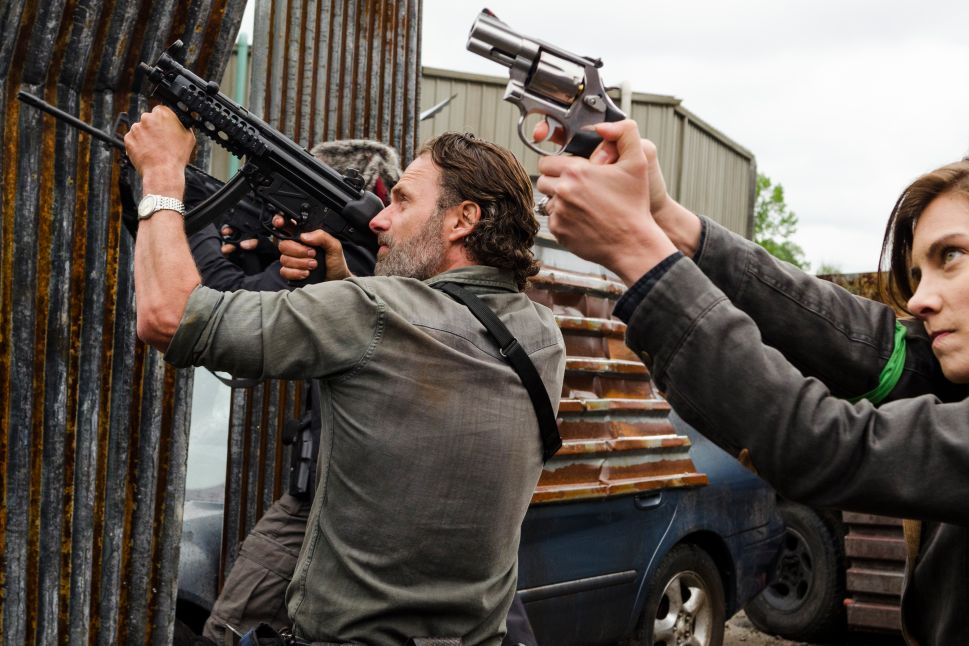