Now that fashion month has come to an end, it’s time for arts to take center stage. Frieze London begins on October 5, so many will be heading straight from the end of Paris Fashion Week right back to England.

The Frieze Art Fair takes place at Regent’s Park, ending on October 8. Gallerists, collectors and art world insiders (and people who just really like art) will be in London, checking out and buying works from over 160 participating galleries.

London definitely isn’t lacking in lavish accommodations—there are plenty of luxurious hotels to stay in during the art fair, which ends on October 8. But this year, instead of heading to Claridge’s, the Savoy or the Ritz, consider staying at one of the newer British hotels…or at least a newly renovated suite. Below, see our top five picks for the best new London hotels to stay in during Frieze.

The present incarnation of the Rosewood London opened in 2013, with 262 rooms and 44 suites. The five-star hotel is located in the Covent Garden neighborhood of the West End, and all of the five-star hotel’s interiors are designed by Tony Chi and Associates, with plenty of Cuban mahogany and seven different types of marble. And of course, there’s the Renaissance style seven-story grand staircase, which was made from all that aforementioned marble.

The stunning hotel is surely one of the most Instagrammed in the city—you’ve definitely scrolled through your feed and seen photos of the appropriately named Mirror Room, which is just one of the dining rooms. And of course, this is London, so there’s an incredible afternoon tea offered.

The Rosewood is also partnering with Ruinart, the official champagne partner of Frieze, for a special offer during the fair. There will be an exhibition at the Ruinart Hub at Rosewood, of six commissioned artworks by Maarten Baas, Georgia Russell, Gideon Rubin, Piet Hein Eek, Hubert le Gall and Erwin Olaf—they’ll be displayed in the lobby and Mirror Room.

If guests opt to partake in the Ruinart x Frieze Experience offer at the hotel, then the one-night stay in a deluxe suite includes a bottle of Ruinart champagne, champagne cocktails with canapés in the Mirror Room as well as a chauffeured BMW to and from Frieze London, along with VIP access to Frieze London—and of course, champagne at the Ruinart Bar at the fair.

Nobu Shoreditch, which opened in July this year, is a unique offering in London—it’s the first European hotel from Nobu Hospitality, which is co-owned by renowned chef Nobu Matsuhisa along with Robert De Niro and Jimmy Sweis.

It offers a much more contemporary look than the more traditional aesthetic of many London hotels, and takes inspiration from its location in the East End—lots of glass, unfinished ceilings and exposed lighting, plus quite a bit of bare concrete.

The hotel is comprised of 148 rooms and suites; the most lavish is the Nobu Suite—it has a private bedroom with a freestanding tub, as well as an en-suite bathroom with a double walk-in shower, separate living and dining areas with a bar and pantry, plus two private balconies, parquet floors and custom yakata robes.

Aside from a new 240-seat Nobu restaurant (London’s third Nobu outpost), there is also a lobby lounge and bar is composed of private booths and Japanese-inspired screens, as well as a fireplace. There are all the signature Nobu dishes, in addition to locally-inspired eats and cocktails. And if you’re simply too tired after all the Frieze activity, you can just order from the Nobu room service.

The Mondrian London at Sea Containers opened almost exactly three years ago, in September 2014, as the first Mondrian-branded hotel outside of the United States. The Southbank hotel is designed by Tom Dixon‘s Design Research Studio, and the nautical-inspired lobby features a handcrafted copper wall reminiscent of the hull of ship.

The maritime theme extends to the 359 rooms and suites, as well as the 56-seat cinema—Dixon incorporated metallic and brass accents throughout, in addition to bespoke furniture by the designer.

The hotel’s Tom Dixon-designed Agua Bathhouse & Spa takes inspiration from the 1970s, while keeping in theme with the nautical nature of the space. There are six private treatment rooms, steam rooms with rain showers and a copper teardrop installation in the subterranean spa lounge, where you can also enjoy a special menu that ranges from champagne to vintage-style sundae desserts—and there’s a raw menu, too.

The Lanesborough itself isn’t a brand-new hotel, but it did receive an extensive 18-month renovation courtesy of ReardonSmith Architects two years ago—the Knightsbridge hotel reopened in 2015, as part of the Oetker Collection.

The renovation kept the historical nature of the 93-room hotel, which includes 43 suites, intact—after all, the Lanesborough is the former home of Viscount Lanesborough, and is one of London’s Regency landmarks.

A fleet of 14 cars, including a Rolls Royce Phantom, will chauffeur guests around London, and every guest receives personal butler service, and there’s a Michelin star restaurant, Céleste, as well as the Library Bar. And in March this year, the 18,000-square-foot Lanesborough Club & Spa opened, which offers signature therapies like the “Lanesborough Lather” and “Absolute Facial,” plus dedicated spa butlers to cater to your every whim.

Brown’s Hotel isn’t actually a new addition to the hotel scene in London—in fact, the historic Rocco Forte hotel in Mayfair was actually the first ever hotel to open in London, in 1837—but it is where you’ll find the newly redesigned presidential Kipling Suite.

The suite was entirely redone by Olga Polizzi last year, and is named after Rudyard Kipling, who wrote The Jungle Book at the hotel. It has a newly designed private lobby entrance, as well as floor-to-ceiling windows, English wallpaper and fabrics and furniture by Julian Chichester. Polizzi handpicked many of the antiques in the room, which has original plaster features alongside newly sourced timber floors, including a 1940s Alabaster pendant lamp.

The biggest standout, of course, is a framed handwritten letter by Kipling, which he wrote and sent while staying at Brown’s—a one-night stay in the suite begins at £6,210. 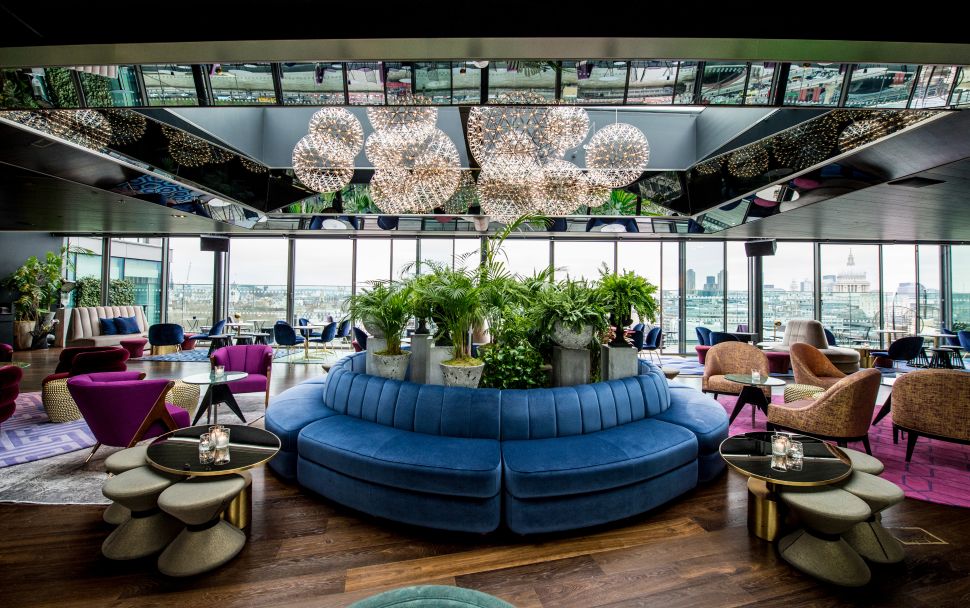