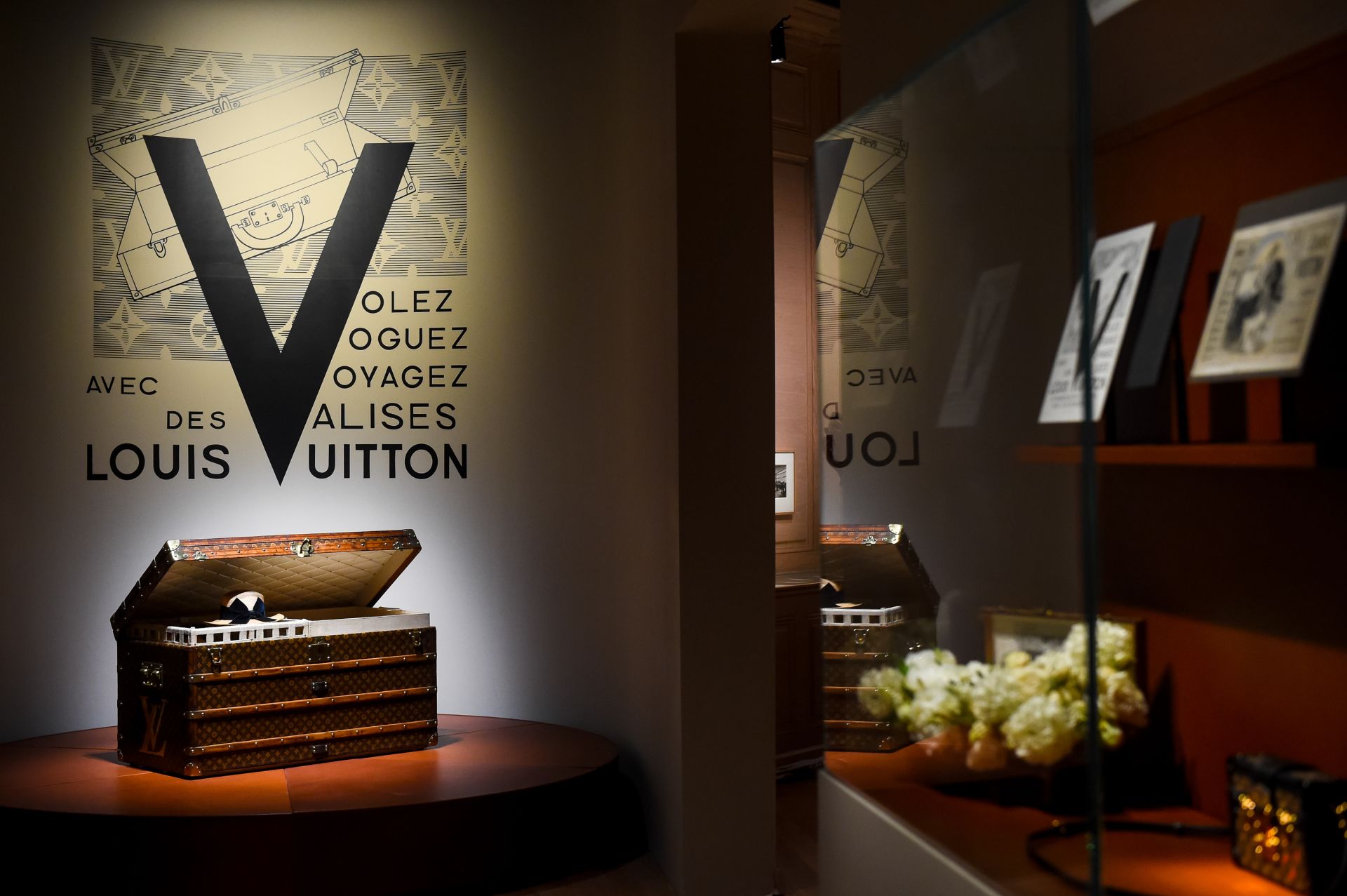 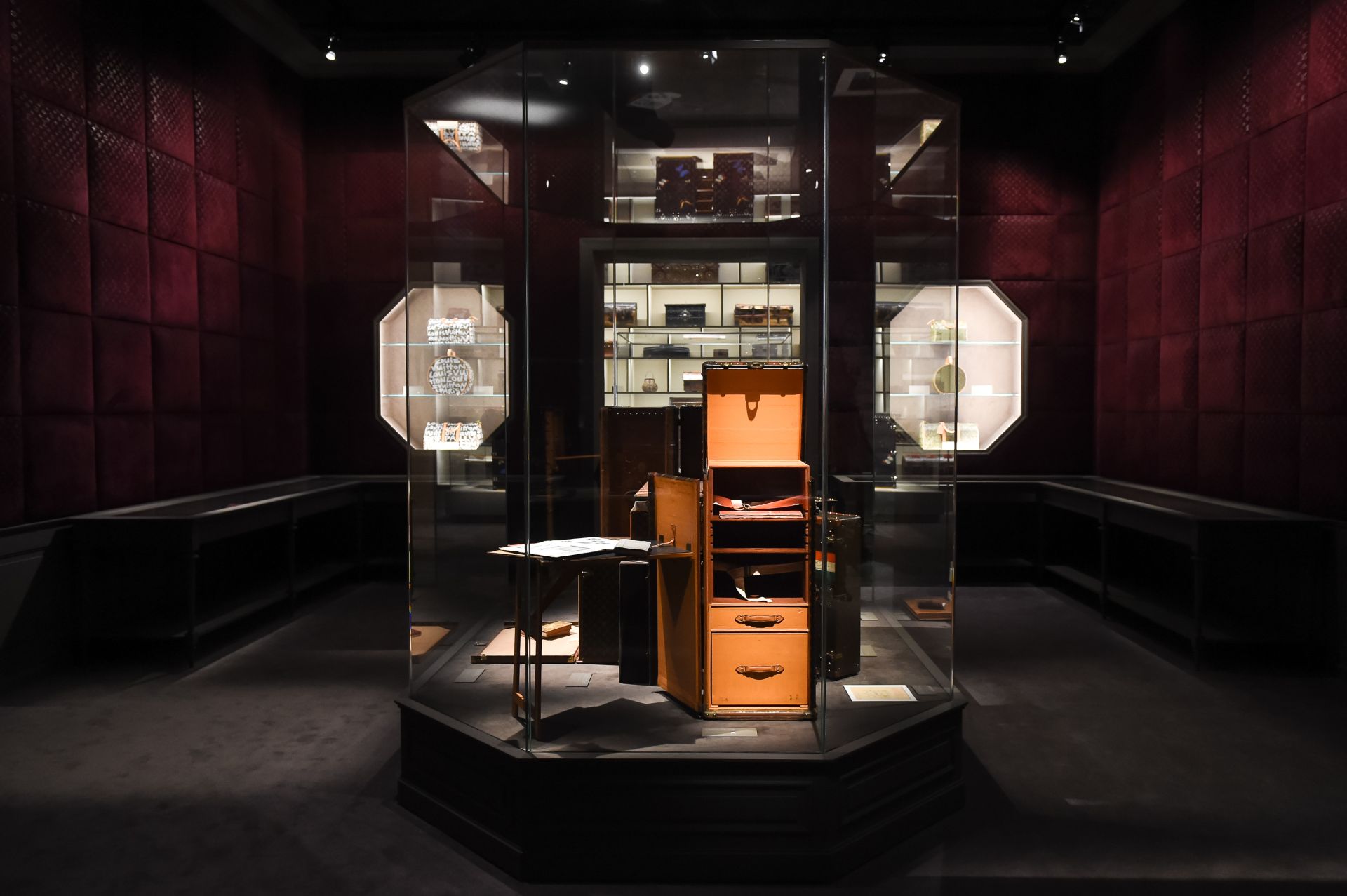 Writing on the road has never looked so chic.
Courtesy Louis Vuitton 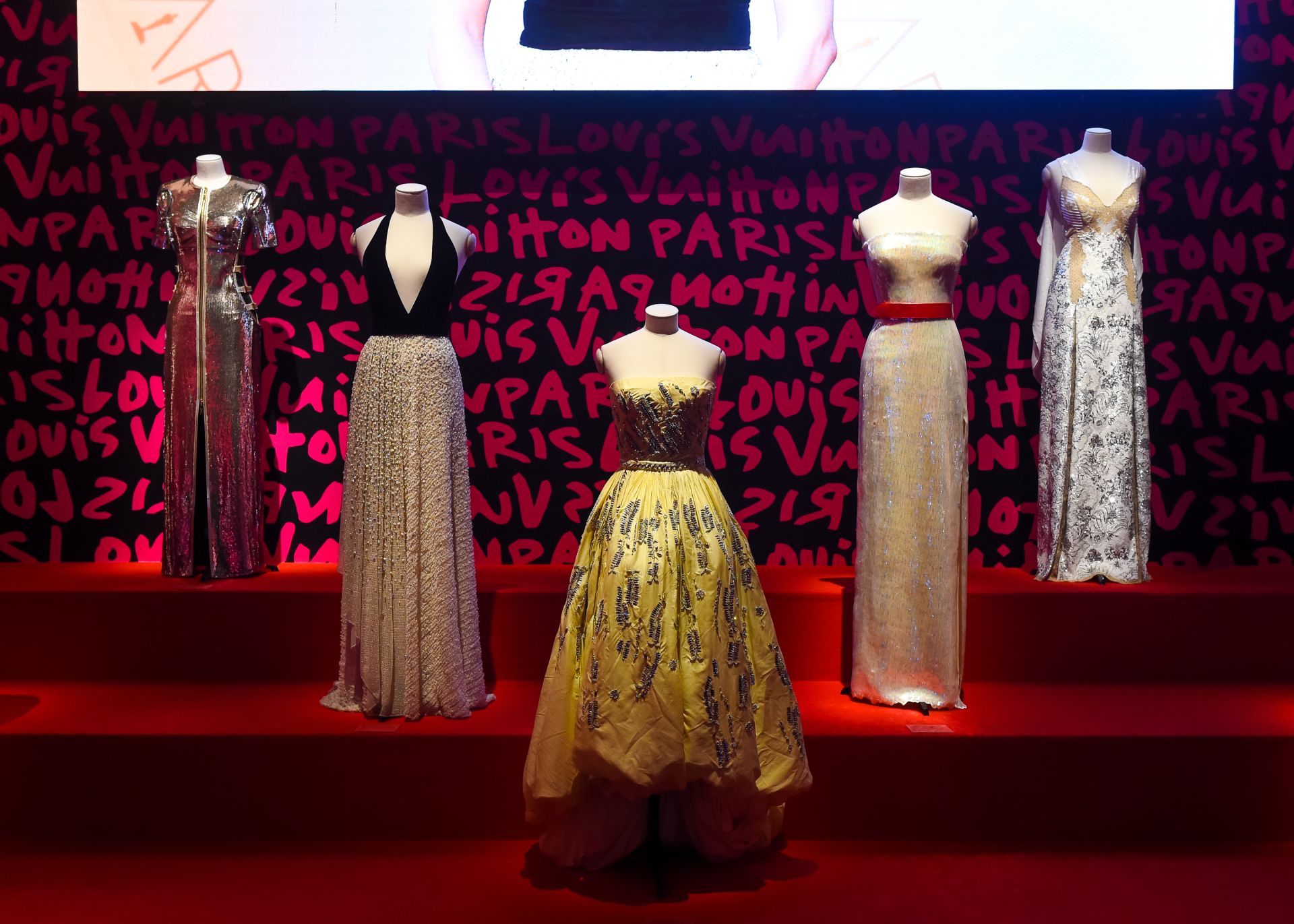 Famous dresses worn by Hollywood's elite, including the yellow frock worn by Alicia Vikander when she collected her Oscar in 2016.
Courtesy Louis Vuitton 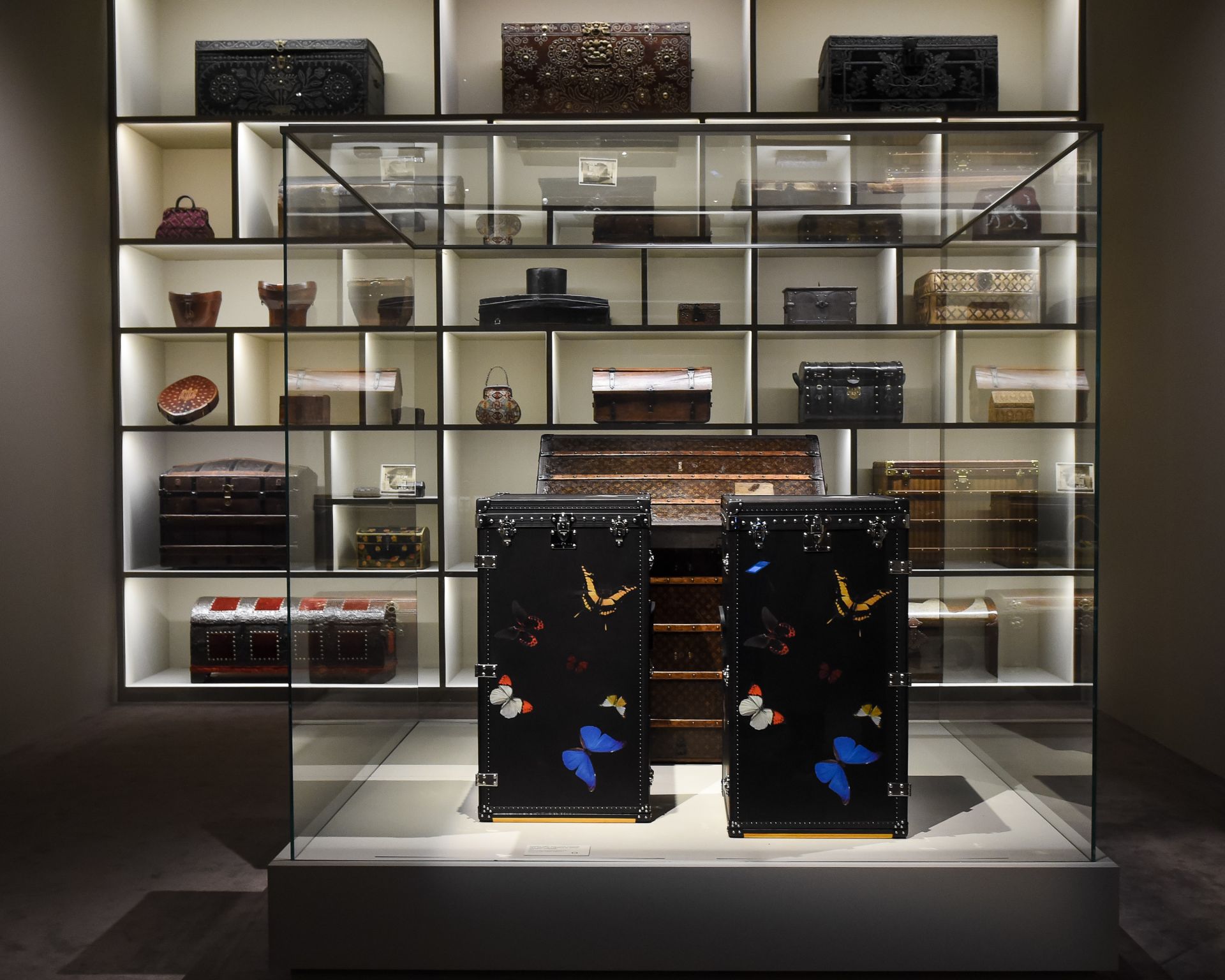 Damien Hirst has put his touch on a Vuitton trunk or two.
Courtesy Louis Vuitton
Advertisement 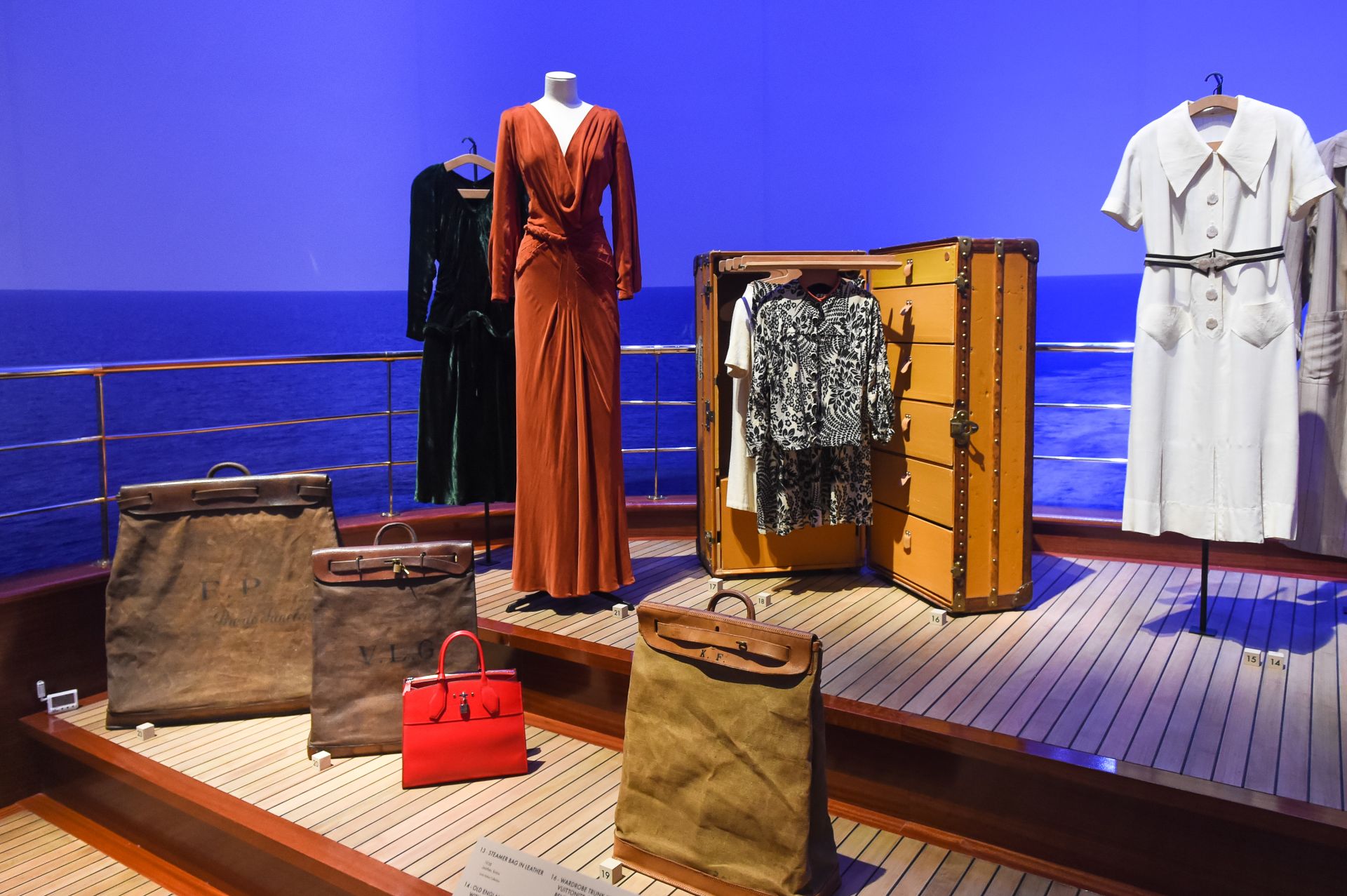 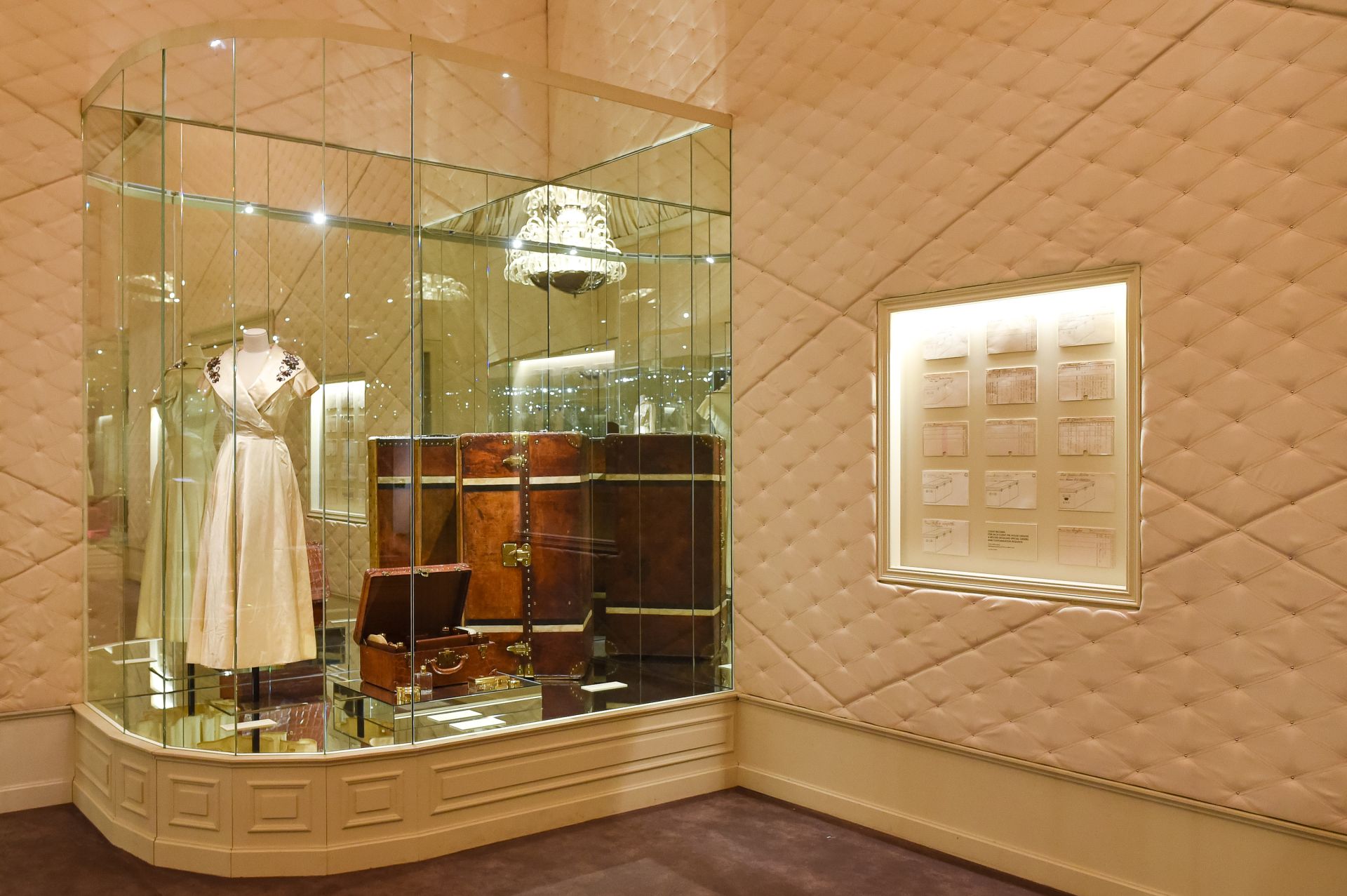 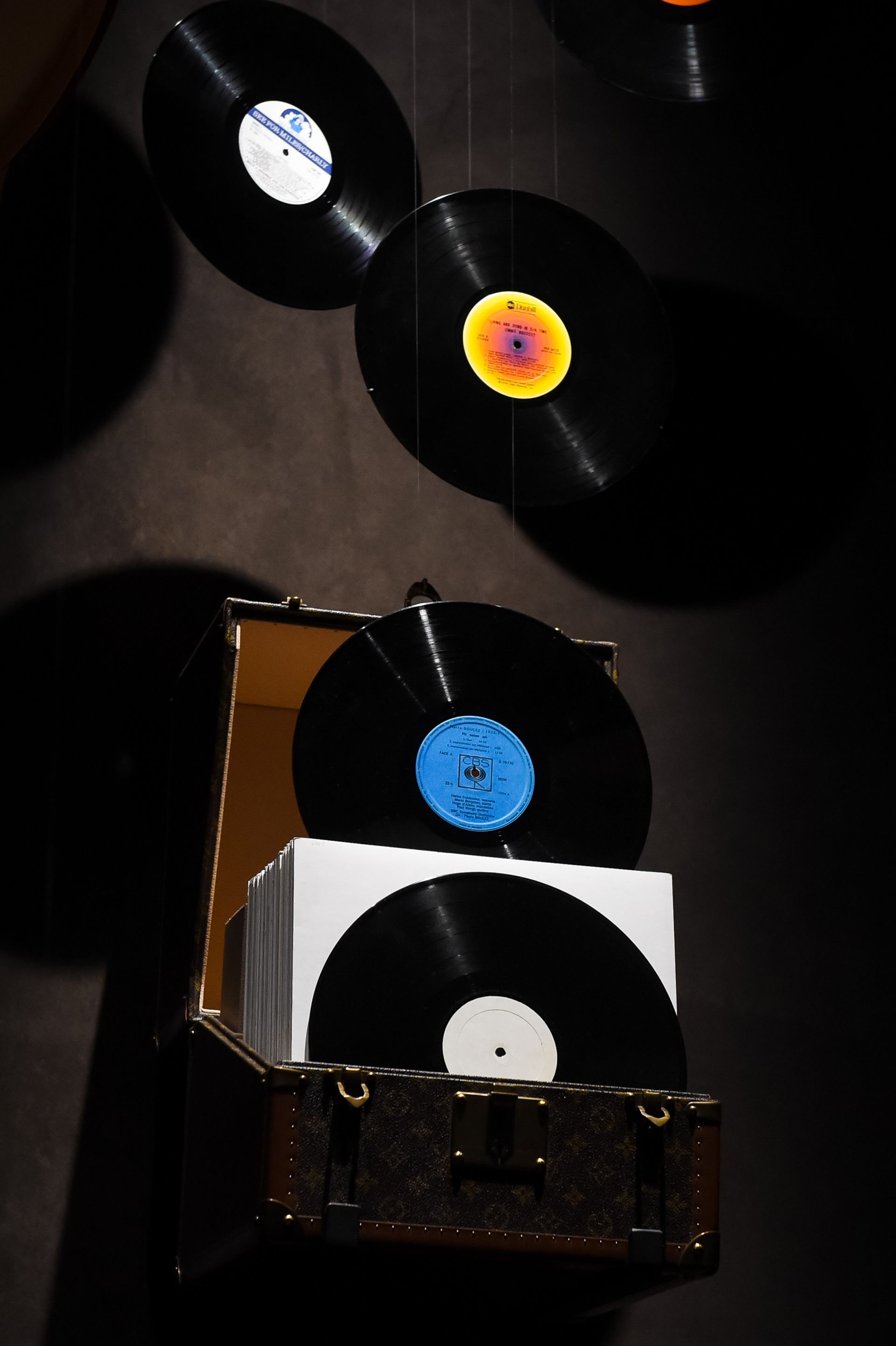 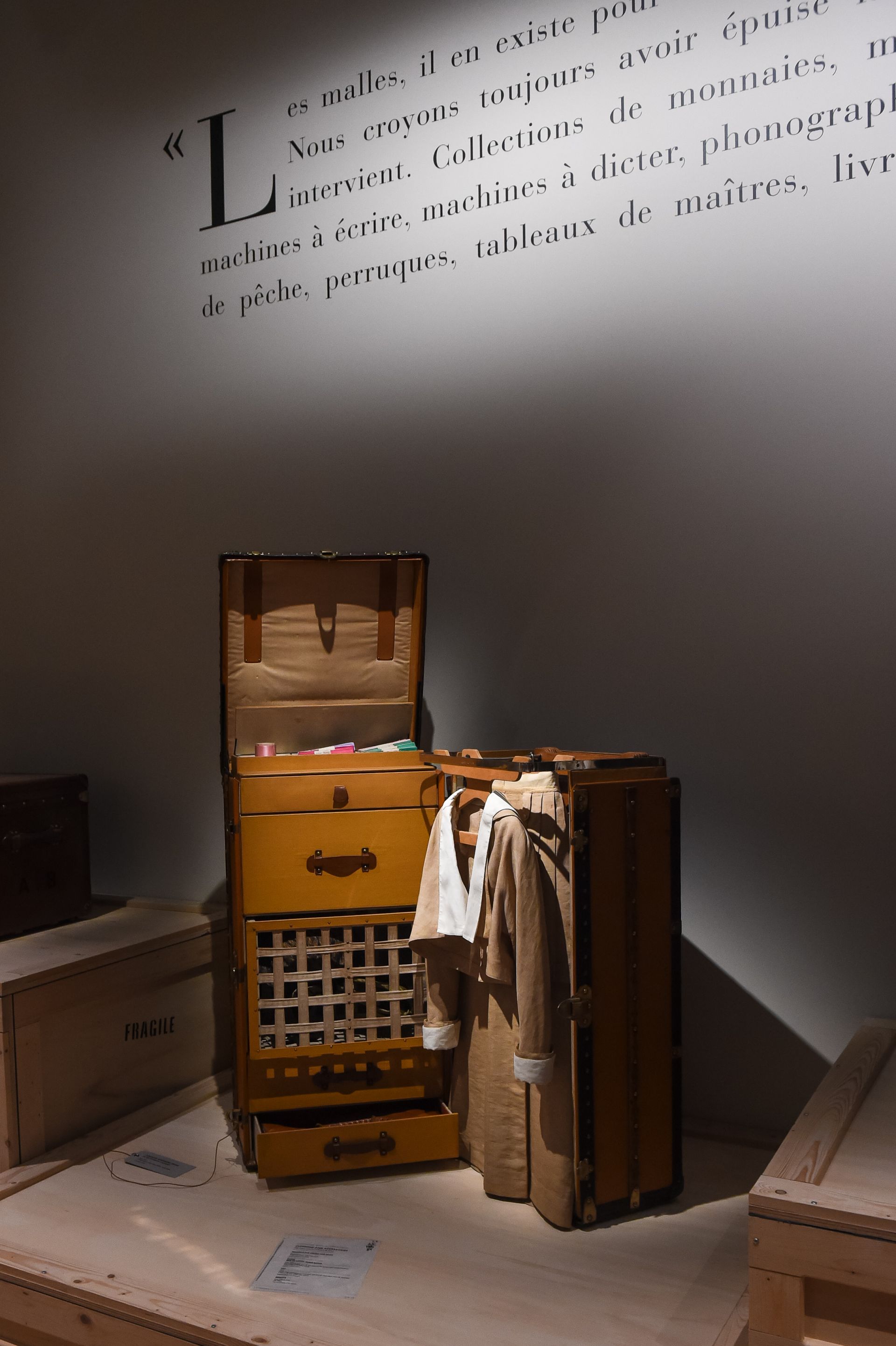 A classic trunk, from the earliest days of Vuittton.
Courtesy Louis Vuitton 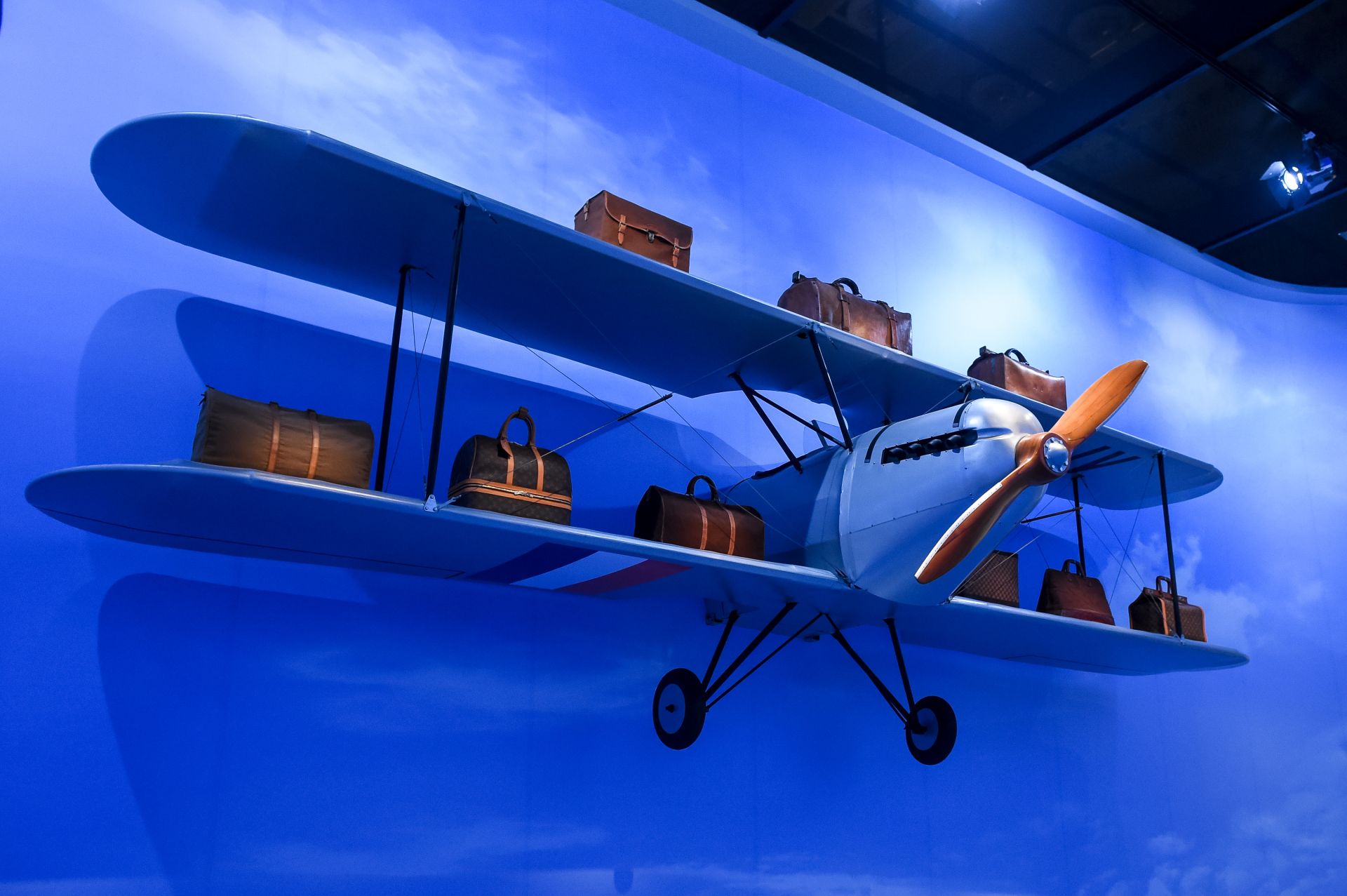 Taking off, with luggage in tow.
Courtesy Louis Vuitton 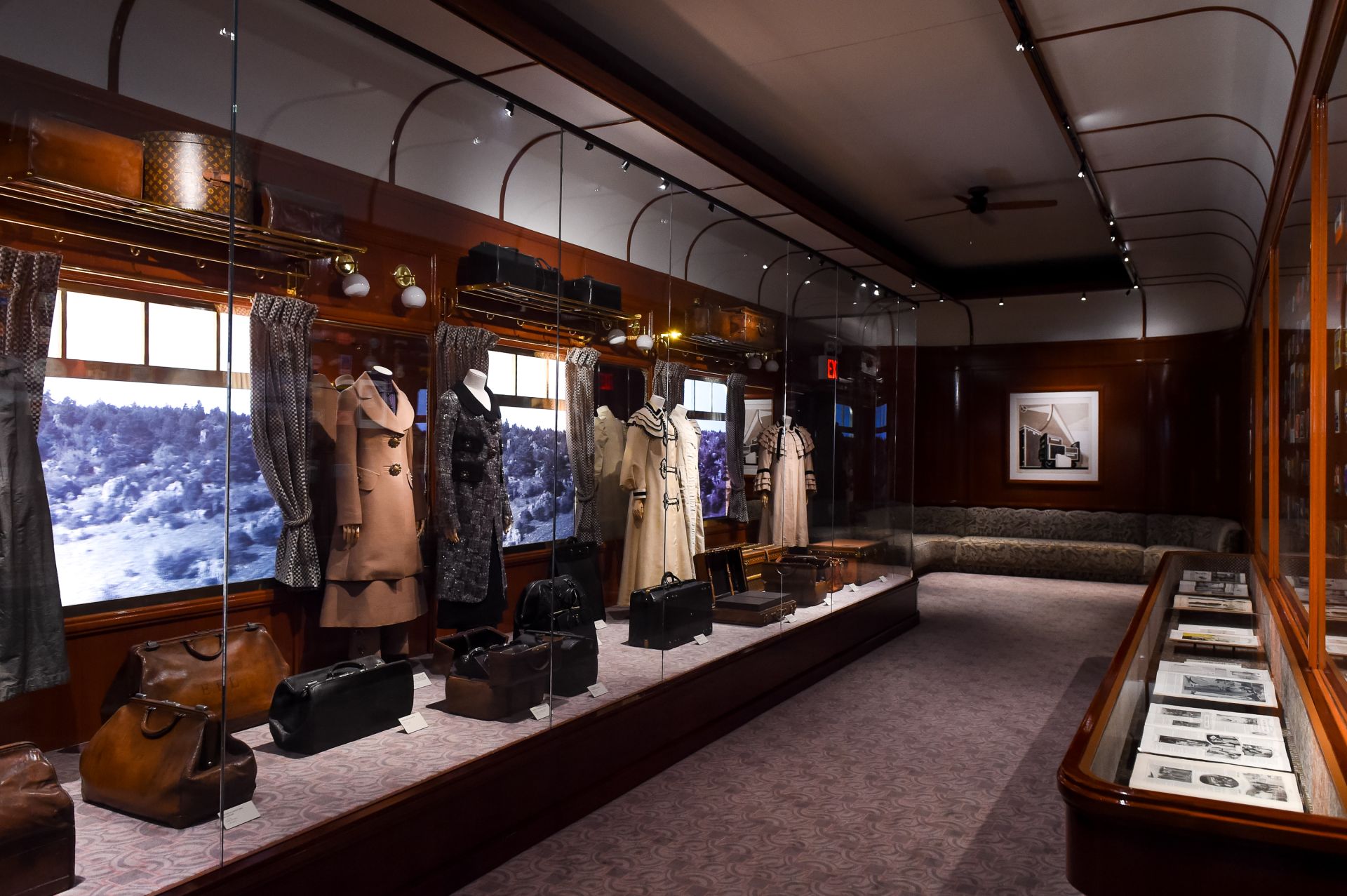 The train room was equipped with seating, a perfect midway place to take a break in the exhibition.
Courtesy Louis Vuitton
Advertisement 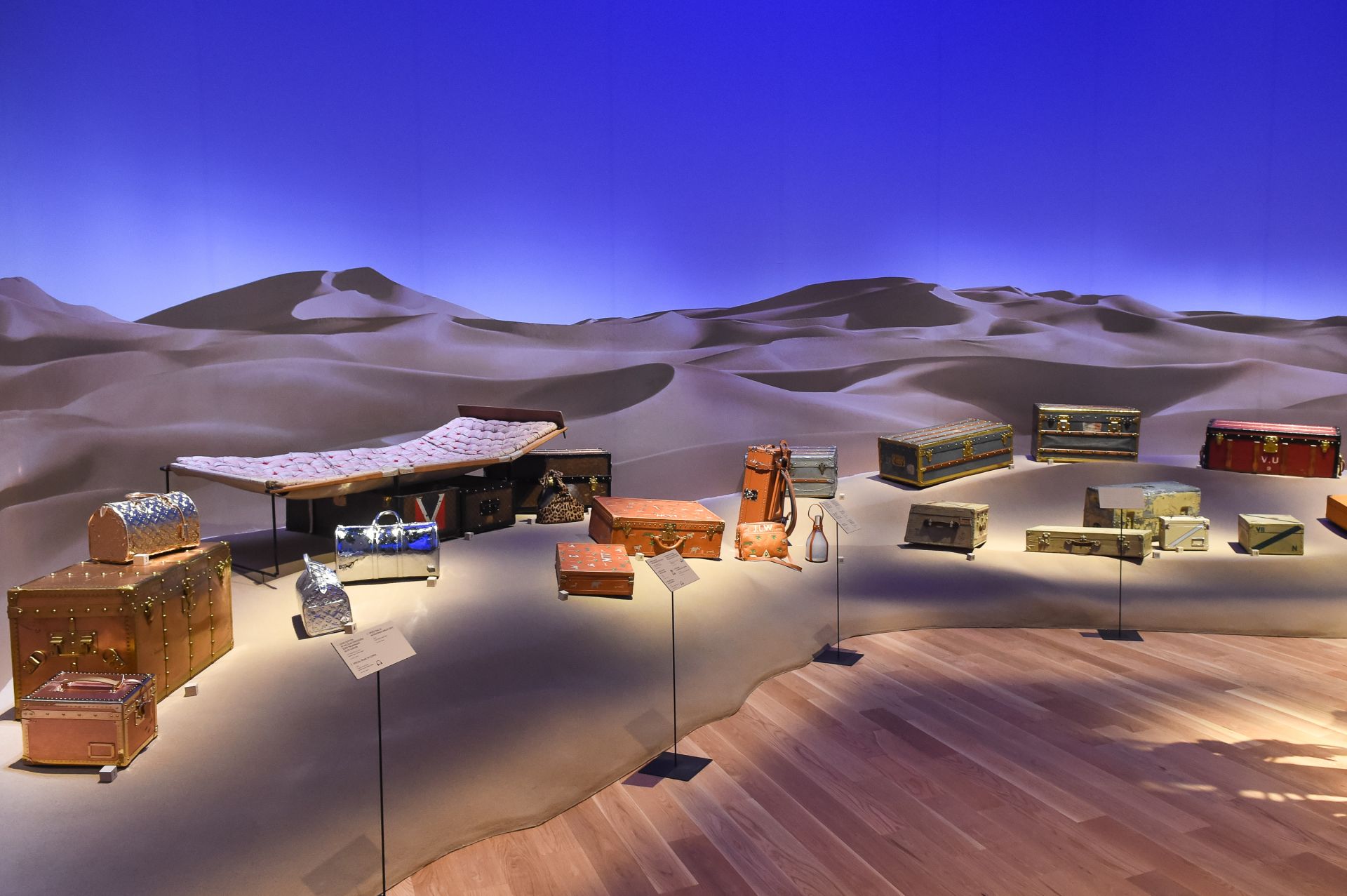 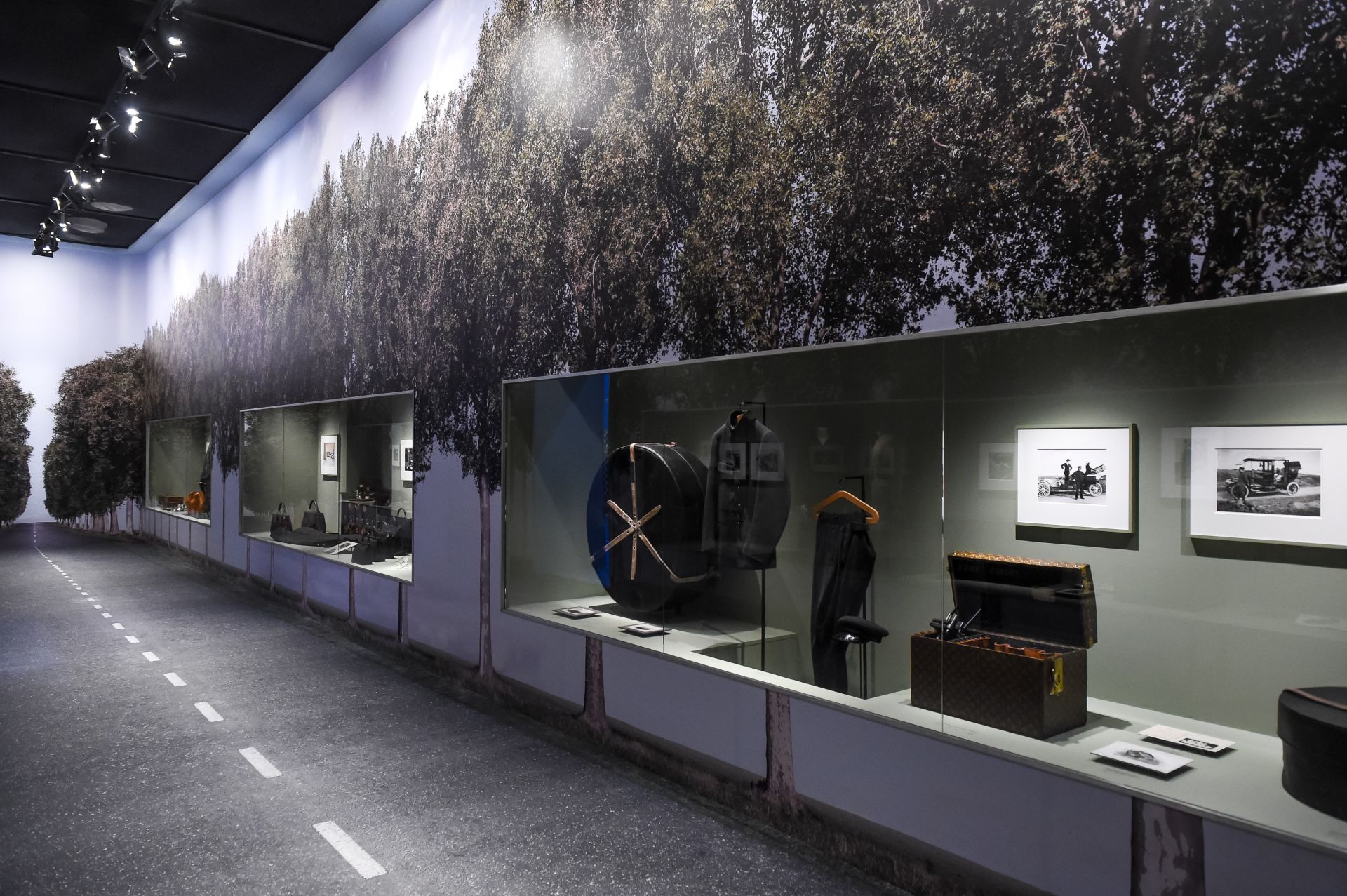 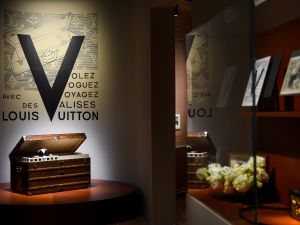 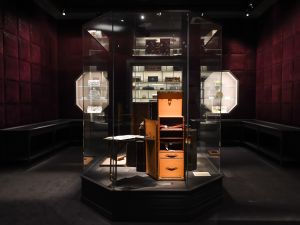 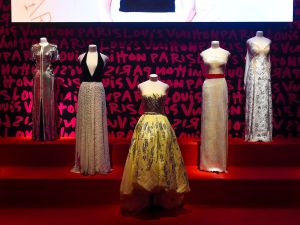 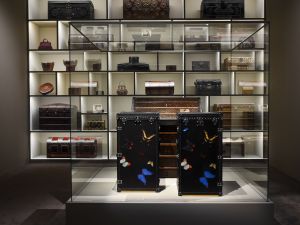 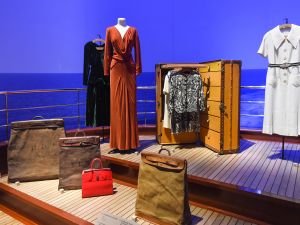 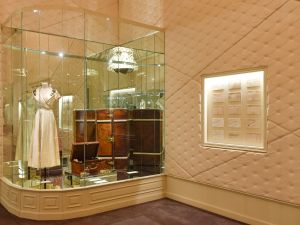 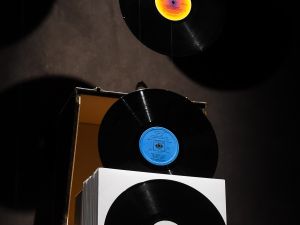 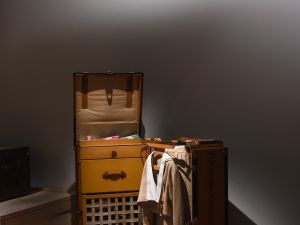 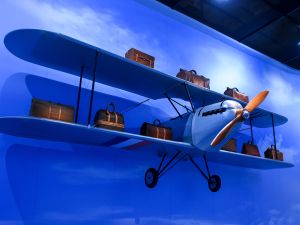 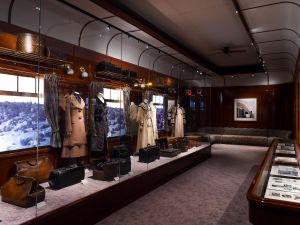 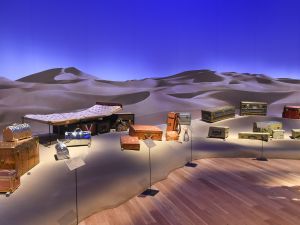 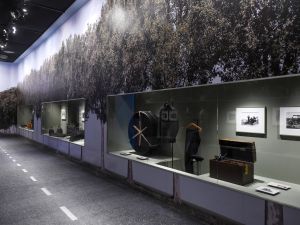 The day before Louis Vuitton‘s “Volez, Voguez, Voyagez” traveling exhibition was set to open in New York, the city was fittingly plagued with a touch of Parisian weather. The streets were damp, the skies were grey and there was a mysterious chill in the air, but within the former HQ of the American Stock Exchange, there was quite a bit of commotion. It was just a few hours before a stunning crush of celebrities and New York types were set to descend upon the red carpet for the show of trunks, handbags and other pieces vital to the Vuitton DNA, but there was still plenty of work to be done.

A crew of men was busy installing a glass vitrine on the second floor and certain portions of the walls were plastered with posters that were haphazardly affixed with tape. Still, the grandiosity of the space was obvious. It was, after all, completely built out by the Louis Vuitton team, led by curator Olivier Saillard and set designer Robert Carsen—that included the dove grey carpeting, the neon Stephen Sprouse wallpaper and a vintage airplane installation.

The exhibition, which is open to the public through January 7 (with free admission, natch) hones in on the travel mentality that the brand was built on since its founding in 1854, thanks to the founder’s dedication to revolutionizing how to travel in style.

“Almost everything he did had to do with form following function,” Carsen said about Vuitton, admitting that he learned quite a bit about the brand’s patriarch through this project. “He wanted to make bags lighter, weather resistant, or one key to open them all, or smaller, or [so] they can pack together a certain way.”

Over the years, the trunks have been not-too-subtly modernized to the times; one classic creation was designed to transport 30 shoes, one had a special pouch delegated for telegrams and another was specially crafted for the safekeeping of a typewriter. The piece of luggage designed for early airplane travel was revolutionary for being lightweight, as it clocked in at 26 kilos when empty—for reference, the suitcases of modern travelers have a limit of 23 kilos, on most airlines. Other modern creations include a DJ box fit to hold records, designed by Helmut Lang in 1996, a vibrant red container with a matching skateboard that was part of the Supreme collaboration and a Damien Hirst medical cabinet that was affixed with painted butterflies.

Why, one might wonder, would Vuitton choose the former Stock Exchange for the setting of this exhibition? Might it have some cultural relevance or purposeful tie-in to the items on display? Well, not quite.

“Volez, Voguez, Voyagez,” which first opened in Paris in 2015 and was then brought to Tokyo and Seoul, has remained relatively consistent in design throughout, including one central room that transports visitors to the rollicking high seas on the right and into the dry desert dunes on the left. Separating the two destinations is a 17-meter mast of a ship, that translates to over 55 feet. Simply put, the French brand needed to find a place in Manhattan with soaring ceilings—and this Financial District building was just the one.

Though, Carsen noted, the brand did like the idea of being down on Wall Street, a true beacon of the American dream. This space, which the set designer began creating this past April, is unlike the previous iterations of this show, as it zigzags throughout the building rather than being in a straight line. The 10 chapters of “Volez, Voguez, Voyagez” take visitors on—you guessed it—a trip. There’s a room plastered in cloud-covered wallpaper that pays homage to air travel, a dark wood-paneled area that’s like stepping into a vintage train and a tree-lined “road” accessorized with trunks created for vehicles.

“I wanted to use as much as possible throughout the exhibition, materials that are actually used in the construction of the trunks, so the right kind of wood, wool, silk, cotton and nails,” Carsen explained to the Observer. While seated in the train room, he noted that it was one of the most difficult to build, thanks to the luxe details, such as retro lighting fixtures. He also pointed out that there’s a definitive theme throughout the show: motion. That could be in the form of a video in the background of a display, the twirl of a fan overhead, a trunk that slowly twirls on a Lazy Susan and even the subtle tilt of the deck, in the room with the boat.

There are a few rooms that are exclusive to this New York show, most notably the last one that is dedicated to the Louis Vuitton creations that have been cemented as a part of pop culture. You can get a closeup look at the butter yellow gown designed by Nicolas Ghesquière that Alicia Vikander wore to collect her Oscar in 2016, the sparkling minidress Taylor Swift wore to the Met Gala that same year and the dramatic feather headdress that was part of Marc Jacobs‘ last collection for the maison in 2013.

A gift shop is attached to this museum, but it’s mostly stocked with books and little leather luggage tags—not the fine leather goods Louis Vuitton is known for. However, the brand is unveiling two new shopping experiences in New York, to coincide with the oeuvre. The first is a pop-up shop in Brookfield Place, which will remain open through March 30, and the second is a bespoke experience for select clients, located in the Four Seasons Private Residences. Through November 10, top shoppers can personalize hard-sided trunks, a variety of leather goods and the travel-inspired curiosities from the Objets Nomades collection to their liking. It’s the best opportunity to take home your favorite piece from the exhibition—so design accordingly.