In the wake of news that Manhattan District Attorney Cyrus Vance declined to bring charges against Hollywood executive Harvey Weinstein over an alleged assault of an Italian model, Mayor Bill de Blasio says he isn’t second-guessing the prosecutors, though he called the allegations against Weinstein “serious.”

Vance caught flak this week over his decision not to file charges against Weinstein in 2015 over his alleged assault of Italian model Ambra Battilana Gutierrez. The New Yorker reported on Tuesday that the Police Department had obtained an audio recording in which Weinstein admitted to fondling Gutierrez. And the International Business Times reported that David Boies, a lawyer for Weinstein, contributed $10,000 to Vance’s campaign after he decided not to bring charges.

Weinstein was fired from his namesake production company, the Weinstein Company, on Sunday after an investigation by the New York Times found that a series of women had accused him of sexual harassment over three decades. The New Yorker reported after Weinstein’s firing on more accusations, including some involving sexual assault.

“While City Hall isn’t privy to the entirety of the evidence and won’t second-guess the prosecutors who are, the allegations against Mr. Weinstein are obviously very serious and that’s why seasoned detectives from the NYPD handled them so thoroughly,” Eric Phillips, a mayoral spokesman, said in an emailed statement.

A separate investigation last week found that Vance’s office had been working on a case against Donald Trump, Jr., and Ivanka Trump, over allegations that they deceived potential buyers at Trump SoHo by exaggerating sales figures. Trump’s attorney, Marc Kasowitz, had contributed $25,000 to Vance’s campaign in 2012, and the district attorney returned that money after Kasowitz became involved in the Trump SoHo case on behalf of Trump’s children. Kasowitz then contributed $32,000 in 2013 to Vance’s campaign after the case was dropped.

Last week, Assemblyman Dan Quart sent a letter to New York Attorney General Eric Schneiderman requesting that he investigate Vance for his role in choosing not to prosecute Trump’s children.

“I’m not calling for his resignation yet but I think to me all elected officials owe it to New Yorkers to uphold the highest ethical standards,” Quart said. “I don’t believe Cy Vance has met or upheld those high standards.”

“It’s up to the attorney general to determine if he’s going to investigate and what the subject matter of that investigation is,” Quart added. “It shouldn’t be my decision.”

Theo Chino, an activist and member of the New York County Democratic Committee, said that he has been pushing for Vance to resign for the past two years. He runs a website, ReplaceManhattanDA.org, which he said “is very badly made, but that’s the idea.” He recalled Vance’s push for federal legislation mandating that Apple reverse its encryption for users among his issues with the Manhattan district attorney.

“Of course I want him out,” Chino told Observer at a small protest outside Vance’s office calling for his resignation on Tuesday evening. “I’ve been trying to get him out by the electoral process but now we have on top of that, there is some weird things going on and we need to have transparency.”

Joan Vollero, a spokesman for Vance, said that Boies did not represent Weinstein in the matter.

She also said that since 2010, the office has designated a senior member of the DA’s executive team with knowledge of the office’s investigations to review each contribution received by the campaign for potential conflicts — and that Kasowitz’s contribution underwent the process and was accepted.

The senior member subsequently flagged the contribution when Kasowitz notified the office of his involvement in the Trump case and instructed the campaign to return it, and the office concluded its probe after two years because it did not yield enough evidence to support a criminal prosecution.

“A subsequent donation by Kasowitz was reviewed by the same senior executive in January 2013 and found to be without conflict, as the investigation had been closed for many months and the contributor had no pending cases before the office,” Vollero said in a statement. “This vetting process goes far beyond what is required by law, and no outside attorney, at any time, influenced any decision in the Trump Soho matter.”

Chief Assistant District Attorney Karen Friedman said that if the office could have prosecuted Weinstein for the conduct that occurred in 2015, “we would have” and that after the complaint was made in 2015, the NYPD — without their knowledge or input — arranged a controlled call and meeting between Gutierrez and Weinstein.

The prosecutors in their Sex Crimes Unit, she said, were not given the opportunity to counsel investigators on what was necessary to capture in order to prove a misdemeanor sex crime before the meeting.

“While the recording is horrifying to listen to, what emerged from the audio was insufficient to prove a crime under New York law, which requires prosecutors to establish criminal intent,” Friedman said in a statement released on Tuesday afternoon. “Subsequent investigative steps undertaken in order to establish intent were not successful. This, coupled with other proof issues, meant that there was no choice but to conclude the investigation without criminal charges.”

A fixture of New York’s legal and Democratic circles for years, Vance still has support from a fellow Democrat, Public Advocate Letitia James.

“I support Cy Vance, I will endorse Cy Vance for re-election, and I don’t understand the controversy,” James said, according to a tweet by a reporter. Her office did not dispute that she made the statement.

But a Democratic district attorney candidate in Brooklyn, Marc Fliedner, also said Vance should go, saying the recent revelations “really go to a failure for women to be properly protected, in exchange for campaign contributions.”

Correction (Oct. 12): A previous version of this story incorrectly described the timeline of donations from Trump attorney Marc Kasowitz to Manhattan District Attorney Cy Vance’s campaign and mistakenly reported the amount of Kasowitz’s donation. The story previously said Vance dropped an investigation into two of Donald Trump’s children “after Trump’s attorney, Marc Kasowitz, contributed $31,000 to his campaign in 2012.” In fact, Kasowitz had contributed $25,000 to Vance’s campaign before the investigation, which was returned when Kasowitz became involved in the case. Then, after the investigation was dropped, Kasowitz contributed $32,000 in 2013, not $31,000. 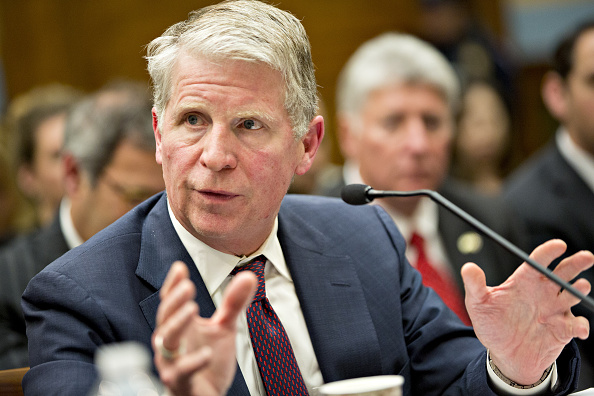