On this side of the world, Facebook is under heated investigation by the FBI; on the other side of the world, China’s Communist Party just closed its 19th congress, asserting firm control over the country. And somewhere in between, bringing the two sides together, Facebook CEO Mark Zuckerberg visits China for the seventh time in just five years.

Zuckerberg arrived in Beijing on Saturday, Wall Street Journal reported, to attend the annual meeting of Tsinghua University School of Economics and Management’s advisory board, of which he has been a member since 2014.

Zuckerberg engages in Tsinghua largely as a mentor for the next-generation tech entrepreneurs. On Saturday, he heard three startup pitches by students and had a talk on innovation and entrepreneurship with Qian Yinyi, the head of Tsinghua School of Economics and Management, in an auditorium filled with 300 Tsinghua students, the university reported on its website.

As a board member of the school, Zuckerberg’s visit is nothing out of the ordinary when taken at face value. But in the context of Facebook’s years of failed attempts to add China to its business map, this could be another crack at opening “The Great Firewall.”

Facebook’s current China strategy targets at advertisement revenue rather than social media users. “Our focus right now is on helping Chinese businesses and developers expand to new markets outside China by using our ad platform,” a Facebook spokesperson told Observer.

She added that Facebook is “spending time understanding and learning more about the country in different ways.”

Following the election (or appointment) results of the latest Communist Party Congress, Western media speculate that the Chinese government’s control over the country’s media will be ever-tightening. (Though Facebook clarified again in Washington this month that it’s not a media company.)

Wall Street Journal reported that Zuckerberg briefly met with China’s President Xi Jinping during the Tsinghua advisory board meeting on Monday, when Xi addressed the board. It’s unclear what they discussed.

Facebook has been blocked in China since 2009. Zuckerberg has visited the country several times since.

He was first spotted on the street of Shanghai in 2012 with his then-girlfriend Priscilla Chan. He has since met with a number of high-profile businessmen and politicians, including Robin Li, CEO of Baidu, and Jack Ma, chairman of Alibaba, during his ensuing visits. Most recently he visited Beijing in March 2016, a trip that grabbed much media attention after he posted a picture of himself running by Tiananmen Square on Facebook. During that trip he lobbied for Facebook’s entry to China with Liu Yunshan, a former top leader of China who was in charge of media affairs.

In November of last year, The New York Times reported that Facebook was quietly developing a content censorship tool to help get into China.

Facebook will host an investors call on November 1 to discuss the company’s Q3 financial results and potentially other business plans. 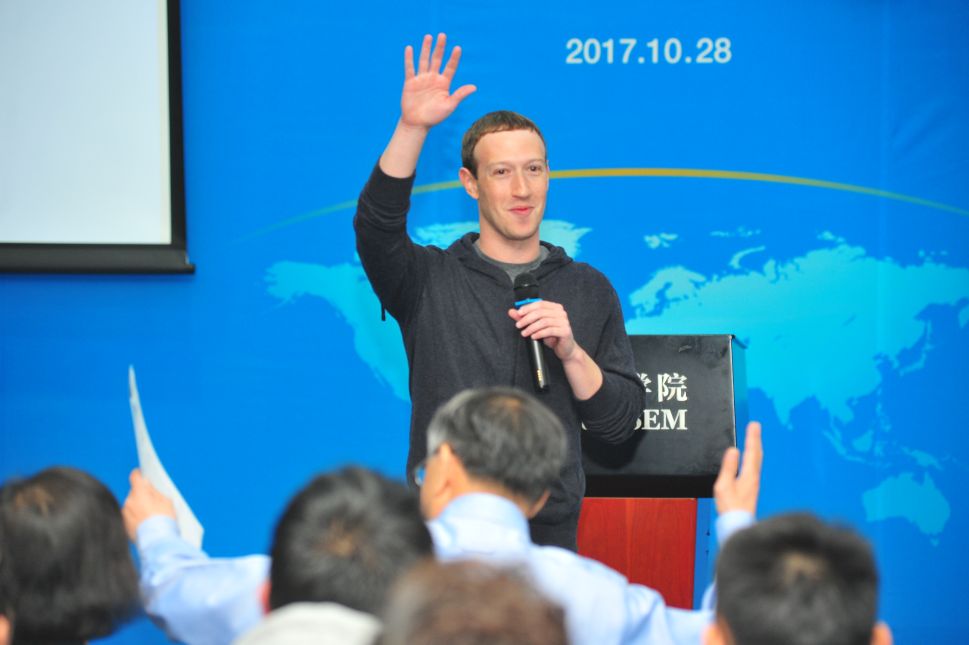