Earlier this month, at Woods Cathedral—a magnificently restored, deconsecrated church built in north west Detroit nearly a century ago—Matthew Angelo Harrison was hunched over his laptop among a heap of extension cords and whirring generators while a crowd looked on. This was the performative part of Harrison’s two-day installation for Culture Lab Detroit, The Consequence of Platforms (2017), which consisted primarily of a hand-crafted 3-D printer that towered above the artist. Whirring into action, the printer’s fine-tipped point shuttered into place while thin strips of clay successively pooled into the form of a human head, the way one might ice the perimeter of a cake.

The Detroit-based artist’s long and diagnostic practice begins with sourcing African antiquities—here, masks from a tribe in Mozambique—and ends with printed, three-dimensional sculptures that elude classification. “My sculptures represent objects from an exhausted cultural economy,” Harrison told the group, weaving through rows of newly printed clay heads. “A lot of African artifacts are used as interior design, and I like to play with that, making a satirical comment on how those things are valued.”

If his schedule is any indication, the artist’s inquiries have struck a chord. When Observer spoke to the artist in Detroit, he had just returned from his solo exhibition at Atlanta Contemporary, Dark Povera Part 1, on view through December 17. Only a few weeks before, he was in New York for the opening of Fictions, a survey of emerging artists at the Studio Museum in Harlem, which runs through January.

At Culture Lab Detroit, a vibrant two-day series of public conversations with luminaries such as Hilton Als, Coco Fusco, Martine Syms, and Edgar Arceneaux, Harrison’s installation was illuminated by hundreds of tapered candles, the light flickering against the lazuline blue of the surrounding frescoes. The candles were a necessity: as in many neighborhoods throughout Detroit, electricity at Woods Cathedral is spotty. Yet for Harrison, working in his native city has emboldened his DIY practice.

“I’m lucky to to be in a situation where I have the space and access to fabrication that I need. In New York, even if you have money, you still run into problems with execution, but here I can rent a machine and do it myself.” Harrison said. “People send things to Michigan to get made. I am spoiled by living at the heart of that environment.”

Crucially, Harrison’s masks are not replicas, but singular objects generated from a “script” of multiples. For example, he might scan ten individual masks from a specific tribe, then craft a “generalized” final form for printing with the aid of face-modeling software. Harrison wants the printed sculptures to “serve as an allusion to something particular, while creating a distance from the cultural relics.” The result is an uncanny object, a face reminiscent of ones often seen behind the glass of museum vitrines, yet utterly new.

Harrison lives in Hamtramck, a city within the boundaries of greater Detroit that continues to undergo cultural transformation. Once a Polish enclave, the city is now predominantly Muslim, home to large Yemeni, Bengali, and Pakistani populations. Though his current work explores the diaspora of African culture, Harrison is deeply interested in how collective identities are shaped and transformed over time, and so his immersion in such a city is fitting. “I think about identity on a macro-scale. What is the process of forming an identity? What are the consequences of having an identity, and why do identities have the boundaries they do?” he said.

Harrison’s masks, which ​scramble the binaries​ “African”​ ​and “African-American,” are rife with contradictions. “Black identity is very confusing to be a part of, and I want to understand that.” His sculptures are often displayed atop pedestals constructed of aluminum and bulletproof glass, nodding to the shuttered liquor stores that mark numerous Detroit blocks. For the artist, this is an act of bridging common materials with the unknown. “To Westerners, African masks are exotic, and in fusing them with a material that is common to liquor stores, I’m forcing the materials to work together.” In reality, the materials cannot mix, and both are ultimately deprived of their function. Harrison’s masks are not designed to be seen through, and the bulletproof glass on which they rest—engineered to protect—cannot shield the objects it elevates.

At Atlanta Contemporary’s Dark Povera Part 1 (literally translated as “dark poor”) Harrison provokes tension between the original objects and his own. The African antiquities he scanned, borrowed from private collections around Atlanta, are included in the exhibition, and covered by dark, sepia-toned vitrines on the floor. Meanwhile, their contemporary counterparts are elevated on pedestals and left open to the air. The originals seem silenced—held captive—emphasizing the vulnerability of the new versions, so much more accessible to touch or harm.

With its racially charged implications, the title also references arte povera—an Italian  movement born out of the country’s political upheaval during the 1960s that emphasized the use of “common” materials. Harrison sees a strong connection between the economic landscape of his hometown and post-war Italy. “The artists working in those conditions used accessible materials to upset value systems within the art world, romanticizing a pre-industrial time,” he said. By contrast, Harrison’s work uses industrial tactics to romanticize what he terms “post-industry,” a time in which artists can use technology to refashion the cultural iconography that defines us.

Sara Christoph is a freelance arts writer living in Brooklyn. 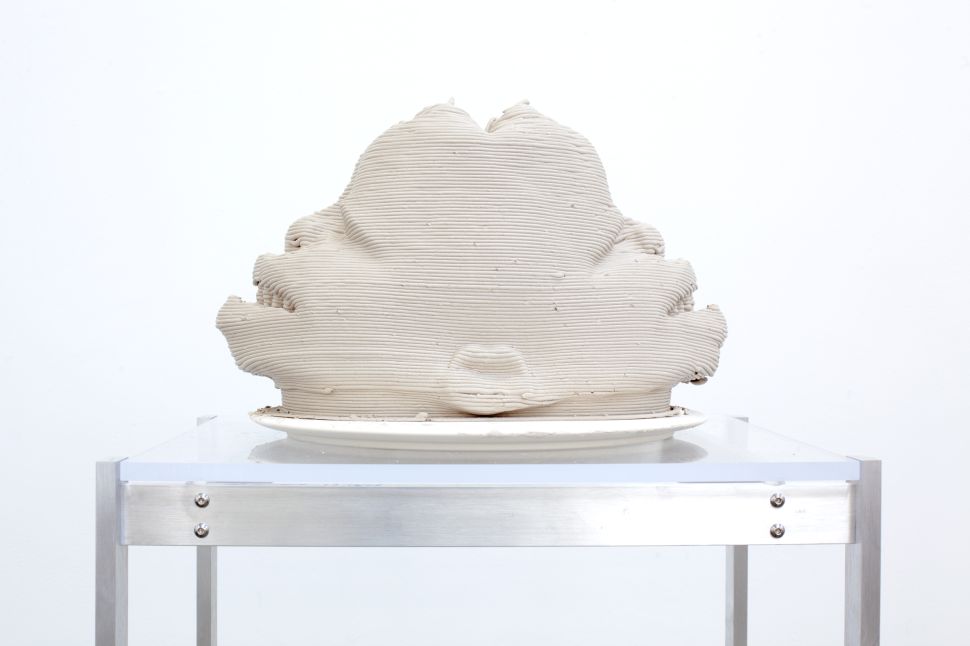