Megyn Kelly is holding Fox News’ feet to the fire once again.

This morning on her NBC show Megyn Kelly Today, the former Fox personality criticized both her old employer and one of its longtime stars, Bill O’Reilly, who left the network in April after a string of sexual harassment settlements were made public.

O’Reilly blasted the article as a “malicious smear” and told the reporters behind the Times story that their scoop was “bullshit” and “crap.” He again claimed he had never gotten a human resources complaint during his television career.

But Kelly, who called the large settlement “jaw-dropping” said this wasn’t true.

“O’Reilly’s suggestion that no one ever complained about his behavior is false. I know because I complained,” said Kelly, who was employed by Fox from 2004 until 2016.

The host then took audiences back to November 15, 2016, the day her memoir Settle for More was released. In the book, Kelly detailed her sexual harassment claims against late Fox News CEO Roger Ailes.

That morning, O’Reilly appeared on CBS This Morning and brushed off the Ailes allegations. “I’m not interested in making my network look bad at all,” O’Reilly said.

After seeing his remarks, Kelly emailed Fox News co-presidents Bill Shine (who has since left the network) and Jack Abernethy.

“Perhaps he (O’Reilly) didn’t realize the kind of message his criticism sends to young women across the country about how men continue to view the issue of speaking out about sexual harassment,” Kelly wrote. “Perhaps he didn’t realize that his exact attitude of shaming women into shutting the hell up about harassment on grounds that it will disgrace the company is in part how Fox News got into the decade-long Ailes mess to begin with.”

The message concluded, “Whatever the reason, you’ve got a hell of a guy hosting that 8 PM hour.”

Shine told Kelly he would “deal with” O’Reilly, but that night the host was on air once again bashing harassment victims.

“If somebody is paying you a wage, you owe that person or company allegiance,” O’Reilly said in a clip played on Kelly’s show. “If you don’t like what’s happening in the workplace, go to human resources or leave.”

“To this day she pushes negative articles on certain Ailes accusers, like the one you are looking at right now,” Kelly said.

Briganti indeed is still employed by Fox News, and the network called her “a valued colleague” in a statement.

Kelly, who also interviewed O’Reilly accuser Juliet Huddy on today’s show, then broadened her point by saying cases like this aren’t unique to Fox News.

“Women everywhere are used to being dismissed, ignored or attacked when raising complaints about men in authority positions,” she said. “This must stop.” 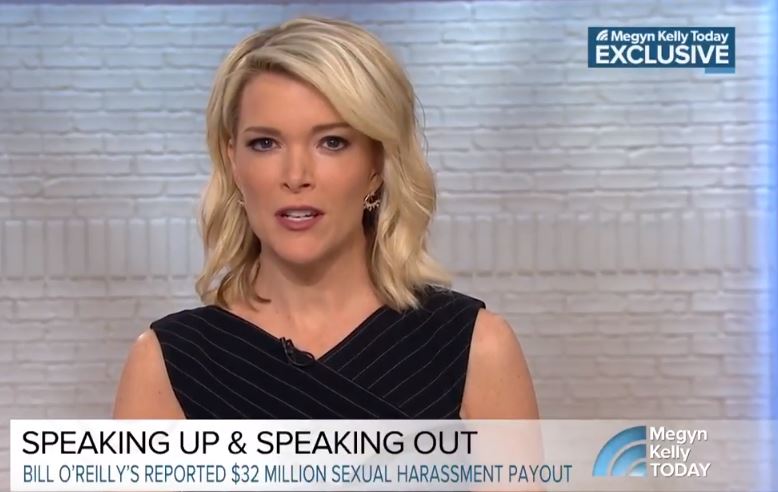