Two New York City Council members are calling on Metropolitan Transportation Authority Chairman Joe Lhota to set up an independent commission to examine the MTA’s runaway costs as the city and state continue to spar over who should fund a plan to fix the city’s subway system.

In August, Manhattan Councilwoman Helen Rosenthal and Upper Manhattan Councilman Ydanis Rodriguez, chairman of the Council’s Transportation Committee, wrote a letter to Lhota requesting the creation of the commission. They said that the MTA has not responded to their request and that they are looking to stress the urgency of the situation.

They noted that independent research has concluded that the MTA has the highest transit construction costs in the world, spending many more times than other cities for similar projects.

The Council members said that the request comes amid the MTA’s request that the city pay half of the $836 million short-term renewal project to fix the city’s subway system.

The Council members noted that while Paris was able to build a new line for $370 million, for example, the first phase of the Second Avenue subway cost $2.7 billion per mile.

Rodriguez also noted that the Mario Cuomo Bridge, for example, was built on time.

“This is about … our children and for the new generation,” he said. “We cannot leave New York City behind. We are taking about 8.5 million New Yorkers. Only 1.4 million have cars. And even most of those who have cars, they live in transportation deserts. They live in places where they have to walk 50 blocks.”

The mayor and the governor have clashed in the last few months over who is responsible for the city’s crumbling subway system.

At the end of July, Lhota unveiled a subway turnaround plan that included the short-term plan, which centers on signal and track maintenance, car reliability, system safety and cleanliness and customer communications. The $8 billion second phase is composed of long-term improvements, including better subway cars, updated communications technology and a new signal system.

Lhota proposed that the city and state split the cost of the short-term plan but de Blasio has refused, maintaining that the money to fund the plan is already in the governor’s budget.

The Council members and transit advocates in attendance, including John Raskin of the Riders Alliance, also criticized New York City Transit’s Enhanced Station Initiative, referencing the service problems on the B, D, F and M lines on Monday morning.

State Senator Michael Gianaris, who is the deputy minority leader, reiterated that the MTA is run by the state, not the city.

“The city does not control the MTA. The state controls the MTA … I don’t begrudge the city for saying, ‘I don’t trust the MTA to come take our city money ‘ … This is the state’s responsibility and the state needs to find a solution for it,” Gianaris said.

He noted that the mayor and others proposed the millionaires tax, which would tax wealthy residents to finance subway repairs and reduced fares for low-income New Yorkers. Cuomo, for his part, is currently studying a congestion pricing plan to tackle the problem.

“Let’s get the state on the ball and figure out what the answer is because the state is providing precious few answers,” he continued. “They are the ones that have to step in and are failing.”

The MTA said that the study that the Council members are calling for was already done by the MTA with a blue ribbon panel in 2008. One recommendation made by the panel, the agency said, is bonding changes that are now in use, including on the Long Island Rail Road expansion project, a project that seeks to add a 9.8 mile-third track to the Main Line between Floral Park and Hicksville.

In a statement, Shams Tarek, an MTA spokesman, said that the MTA studies best practices and takes “aggressive steps” to build major projects while reducing costs, with approaches such as design-build contracting and holding contractors accountable for delays.

“New York has some of the highest construction costs across all industries — which is exactly why the MTA’s new senior management team is laser-focused on this issue,” Tarek said. “And while ignoring the facts can garner headlines, the fact is that there has been a study on this topic — a 2008 blue ribbon panel on construction at the MTA made a series of recommendations that are paying off.”

This story has been updated to include a statement from the MTA. 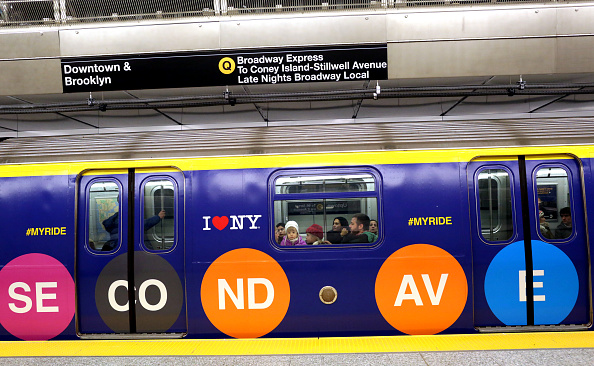