In Woman with a Pearl Necklace (1662-5), you find much of what draws people to the paintings of Johannes Vermeer (1632-75). A woman clad in a fur-trimmed yellow jacket is alone, in soft light, holding a necklace of pearls and looking at herself and the necklace in a mirror. It’s a private moment, a moment of vanity, but a glorious radiant one, as the light fills the frame.

It’s paintings like Pearl Necklace, and the nine other works by Vermeer on view in “Vermeer and the Masters of Genre Painting: Inspiration and Rivalry,” that makes this one of the shows of the season.

But the curators at the National Gallery, where the exhibition is on view through January 21, have given us something more. They have reminded us of something important—that Vermeer was not alone, and he saw and borrowed from other painters who depicted quiet, intimate moments. The works of those artists are also the subject of this magnificent exhibition.

Those artists were Vermeer’s peers, but usually not his equals, although on their best days they produced serene, beguiling works that give the same kind of pleasure. These will be pictures of discovery for art lovers who would go to any gallery once they hear the word Vermeer.

Genre paintings tend to be pictures of domestic life, in contrast with grand historical spectacles, portraits of royalty, mythological scenes, or depictions of battles or saints. Woman Writing a Letter, with Her Maid (1670-71), is about as dramatic as Vermeer gets, with a woman urgently putting pen to paper, a maid at her side and crumpled sheets on the floor in front of her.

Instead, Vermeer and the show’s other artists created quiet intimacy, but the exhibition’s head curator, Adriaan Waiboer, warns not to confuse those scenes with realism. “Had [the artists] been truly interested in depicting everyday life, they would have portrayed farmers working on the land, and men and women suffering from the plague,” he writes in the catalogue.

Artists would get to those subjects soon enough, but these artists in Vermeer’s time were painting for themselves, their peers and their clients. We see women alone at domestic tasks, suitors approaching women, letter-writing, lute playing, doctors’ visits, and other everyday events. The show is evidence that the everyday in art doesn’t mean the ordinary.

As Pablo Picasso said, good artists copy, great artists steal. Most of the works on view are examples of borrowing, even by Vermeer. Waiboer, the curator, tells us that Vermeer “only painted subjects that were the same or variations of what others had painted before him.” Collectors were more interested in what they knew, than in novelty.

We learn that Woman with a Pearl Necklace was Vermeer’s take on Woman before a Mirror, by Frans van Mieris (1650-1), which in turn was inspired by Young Woman at Her Toilet with a Maid by Gerard ter Borch (1662). A look at those two earlier works suggests that Vermeer’s thievery worked.

One scene that Vermeer did not borrow from, and there are many, is Gallant Conversation by Gerard Ter Borch (1654). The National Gallery includes this picture in a section of the show where the central figure in each picture is seen from behind. In this case, that figure is a woman in a shimmering silk dress. What we can see of her head from behind shows her looking down. To her right is a military officer addressing her. Between them is an older woman sipping from a long-stemmed glass of wine. Is the soldier admonishing the elegantly dressed woman? Is he asking for her hand? The ambiguity and the luminescent silver gown keep you wondering and looking.

Three pictures couldn’t be more modern. Each is the scene of a visit of a doctor to an ailing young woman. The affliction is lovesickness. In every scene, the doctor is an embodiment of obliging skepticism. In Frans van Mieris’s picture from 1657, the patient looks pleadingly at the doctor, hoping that he’ll find something wrong with her. In Jan Steen’s scene on that subject from 1661-2, the physician mugs doubt to his patient’s maid, and a young boy playing with arrows on the floor hints that Cupid might be involved. In Gerrit Dou’s the The Dropsical Woman (1663), the doctor examines bodily fluids in a glass orb that is as exquisite as everything else in the rich patient’s room. The leisure in which to ponder the state of one’s health is a luxury, we’re led to believe.

If Vermeer could bring a levitating lightness to a scene, Gerrit Dou could paint one with magical precision, like Astronomer by Candlelight from 1665, where the light itself creates intimacy. You feel the influence of Rembrandt there, and it has the elements of a scene of a medieval saint, although the man in question is neither a monk nor a magician, but a scientist.

Vermeer didn’t paint many men, preferring women, most often alone, but he painted a geographer and an astronomer. Both are on view. Maybe he wasn’t painting women so much as he was painting solitude in domestic life, and the solitude in the pursuit of knowledge for these scientists ran parallel to that. We don’t know. Painters of genre pictures wrote little about those works. Once again, the ambiguity is part of what keeps us looking. 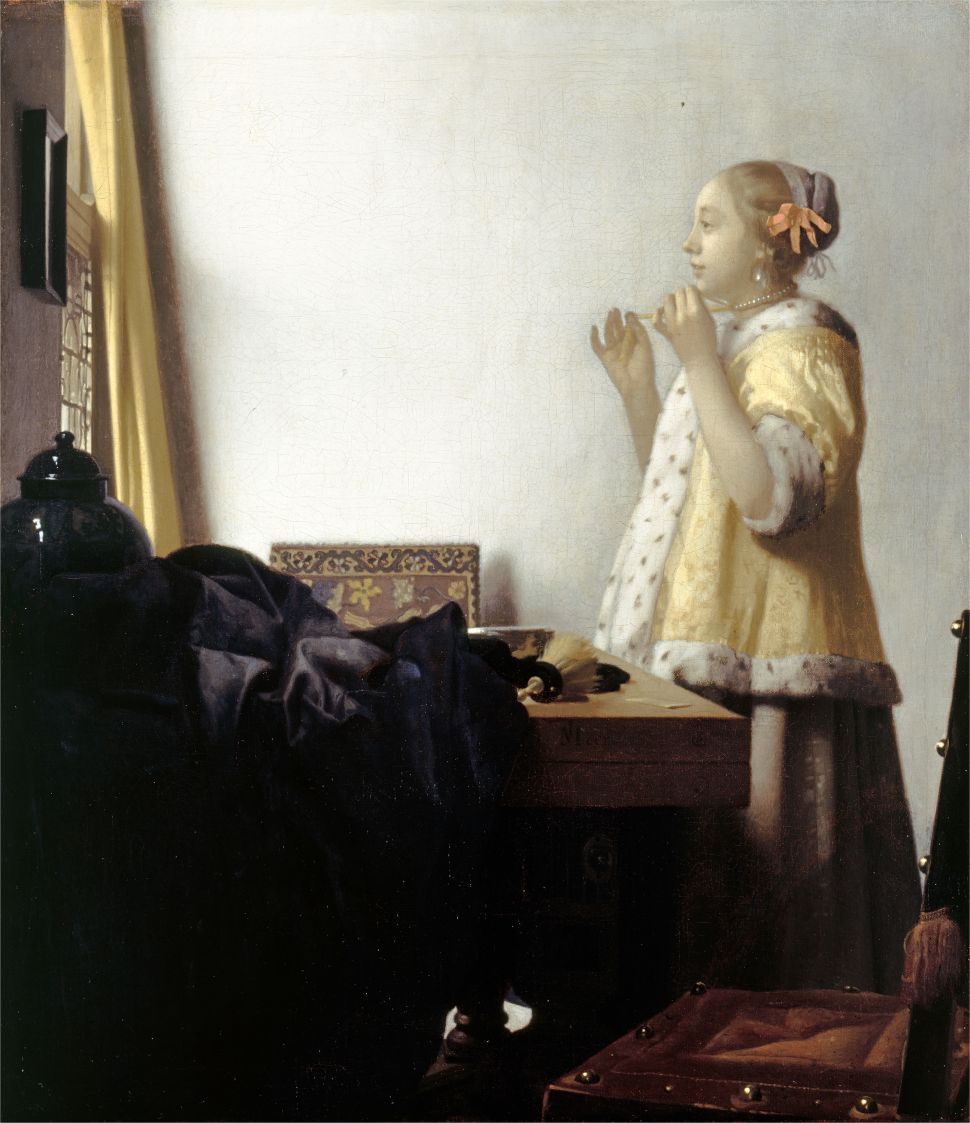