New York is joining the ranks of major European cities as it looks for its first-ever “nightlife mayor,” a liaison between the city’s booming nightlife industry and community residents.

At the end of September, Mayor Bill de Blasio signed legislation sponsored by Brooklyn Councilman Rafael Espinal creating the Office of Nightlife. The senior executive director of that office — the “nightlife mayor” — would work with the mayor’s Office of Media and Entertainment (MOME). A nightlife task force will survey the scene — bars, music venues and restaurants — manage daily operations and issue recommendations.

Espinal said that nightlife had a significant impact on his life when he was in his 20s and that the new position is inspired by Amsterdam’s night mayor, a position held by Mirik Milan since 2012. He noted that Amsterdam has seen a 30 percent decrease in noise complaints and nightlife-related crime since getting a night mayor.

“The idea is that a lot of the issues that the industry faces is, one, over-enforcement by city agencies and then, two, adversarial relationships with the local community,” he said. “So we can find an avenue where we can create a dialogue, help bring nightlife into the conversation of city planning and open dialogues between the community and the businesses and be able to reduce the amount of noise complaints and the amount of quality of life complaints the city receives.”

Nightlife Industry Gets A Voice

The office — which has a $300,000 budget — will function as a liaison between the nightlife industry, residents and the city government to make sure health and safety regulations are followed and bolster relations between nightlife establishments and the neighboring community.

A 12-member Nightlife Advisory Board will make recommendations on issues and trends pertaining to challenges business owners deal with, public safety issues, zoning and other community-oriented concerns and share them with the mayor and the Council 18 months after the law goes into effect.

The mayor’s office said many people have applied for the position but that neither the names of candidates nor the number of applicants are public information yet and that the salary likely will be $130,000. Eligibility requirements include at least five years of experience working closely with the nightlife or music industry, with city government regulations governing the nighttime economy or health and public safety and understanding city politics and government structure.

“Nightlife is part of the soul of our city,” Ben Sarle, a mayoral spokesman said. “The musicians, artists and entrepreneurs that make up this community are crucial not only to our culture, but our economy. We are thrilled to launch our new Office of Nightlife which will help coordinate the businesses, communities and city agencies to help New York City’s nightlife industry prosper and ensure it works for all New Yorkers.”

A recent MOME report found that the city is home to one of the world’s largest and most influential music ecosystems, supporting about 60,000 jobs, accounting for roughly $5 billion in wages and generating a total economic output of $21 billion in business revenues and self-employment receipts. It also found that local artist communities, mass music consumption, the global recording business and infrastructure and support services are directly responsible for about 31,400 jobs, $2.8 million in wages and $13.7 billion in economic output.

Espinal said hundreds of people have applied for the job, including from community boards, the artist community, industry folks and business owners as well as artists who are flame throwers, dancers and musicians. He said he would prefer someone from outside city agencies and the administration.

He noted that the city has seen a 20 percent decrease in the number of music venues over the last 15 years and that that stems from city enforcement and displacement because of real estate.

“There’s a lot of concern from the community that this office would only be an office that’s going to help the nightlife community and that perception has to be erased because this is an office that is supposed to help all communities,” he said.

Competition Heats Up for Coveted Spot

Candidates include Bronx native Gerard McNamee, the former director of operations for East Village nightclub and concert venue Webster Hall before it was sold to Brooklyn Sports Entertainment in April; Brooklyn resident Brendan Sullivan, a DJ, producer and author; and Matthew Demar, who rapped in the 1990s under the moniker “Kid Panic” and a supporter of President Trump.

Sullivan, 35, who grew up in Connecticut, said his experience includes serving as bartender and head bartender at The Modern at the Museum of Modern Art and deejaying at the Beauty Bar in the East Village for five years. He also worked at Pianos NYC and deejayed at St. Jerome’s, where he met Lady GaGa and eventually became her DJ, touring with her and starring in her first music video.

He met with Espinal at the end of September, applied for the position and has since had three interviews. His plan for his first 100 days as nightlife mayor, if chosen, includes opening the $30,000 MOME rehearsal budget to DIY spaces and others that want to meet soundproofing guidelines, developing a noise mitigation plan and food handler’s permit for nightlife and developing an “agent of change” law similar to San Francisco to keep venues from closing.

“In nightlife, the funny thing is you can only do more of it … as a DJ, I’m on the road a lot but this to me is the first opportunity to grow up in night life and stay true to it,” Sullivan said.

“There’s no one in the city to help those people out right now,” he said. “They’re either ignored, criminalized or they are just trying to fly so low below the radar that nobody will care about them.”

Demar, 49, who grew up in Westchester, Manhattan and Long Island, has been in the nightclub and restaurant business for more than 30 years. He worked for his first nightclub, the Roxy — which was later renamed 1018 — at the age of 13 hosting high school teen nights, managed his first nightclub at 17 and brought one of the first foam machines to the city from Mexico. He ran clubs such as Coco’s and Mirage Glow.

In the 1990s, he toured the country with Boyz II Men, Big Daddy Kane and MC Lyte. He also developed a nightclub in Utica and owned the Hollyrock nightclubs in Herkimer, Utica and Sylvan Beach.

“I’m the only person — unless I’m wrong — but I think I’m really one of the only people that has entertainment, that has nightclub and hotel experience,” he said.

Demar has not heard back from the city. He says he supports de Blasio and was unfazed by his anti-Trump rhetoric. He says he has no party affiliation and is focused on making nightlife come back.

“Nightclubs are closed, have shut down, smaller venues and the problem is there’s nobody that’s ever advocated and worked with them,” he said.

He spoke to them about the importance of affordable spaces and looking at regulations.

“Regulation in nightlife is always hurting creatives,” Leichsenring said. “For instance, Berlin is a 24-hour city since 1949 so we don’t have restrictions on how long you run your venue.” 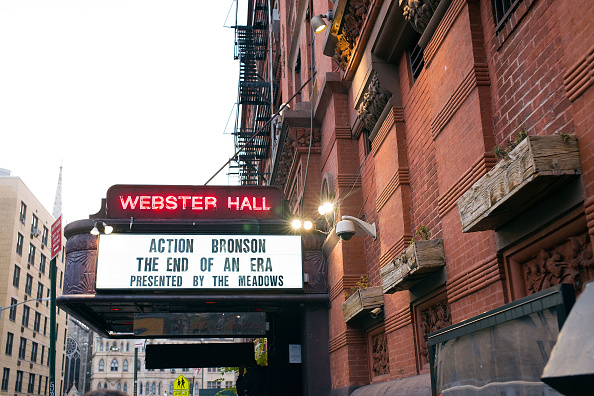