NFL players are not protesting the flag, the National Anthem or America. What started with former San Francisco 49ers quarterback Colin Kaepernick and has spread throughout the league is a direct protest to police brutality against African Americans and racial inequality. But President Donald Trump has stirred up his base with accusations of anti-American sentiments and it has likely led to a decline in ratings for the country’s most popular sport.

In a series of Tweets and public comments last month, Trump attacked the NFL and said any “son of a bitch” who is kneeling for the National Anthem should be fired.

If NFL fans refuse to go to games until players stop disrespecting our Flag & Country, you will see change take place fast. Fire or suspend!

…NFL attendance and ratings are WAY DOWN. Boring games yes, but many stay away because they love our country. League should back U.S.

Great solidarity for our National Anthem and for our Country. Standing with locked arms is good, kneeling is not acceptable. Bad ratings!

Courageous Patriots have fought and died for our great American Flag — we MUST honor and respect it! MAKE AMERICA GREAT AGAIN!

According to Nielsen, overall total viewership for the NFL is down almost eight percent through the first six weeks of the season compared to the same span last season. When you average all networks, roughly 15 million viewers are tuning into NFL games this season compared to 16.2 million through Week 6 of the 2016 season. That’s a significant 7.5 percent drop, though ESPN’s Monday Night Football is up 6 percent with just north of 11 million viewers.

And this isn’t the first sign of trouble the league has seen. The 2016 season was down a full 8 percent compared to 2015, though much of that slide can be attributed to the attention-grabbing presidential election. Three different candidate debates went head-to-head with NFL games in one of the most memorable political seasons of all time last year.

This season doesn’t have such an excuse. You can make the argument that the growing knowledge of head trauma and the danger of concussions have turned some fans off. You can point to the sloppiness of many of the early-season games as a reason as to why some have changed the channel. But the biggest culprit is undoubtedly Trump and the response of his followers to players kneeling during the National Anthem.

Which is too bad, because they may just be missing the point. According to a Guardian investigation, black Americans are more than twice as likely to be unarmed when killed during encounters with police as white people. Black people make up just 12 percent of the U.S. population, but compose roughly 30 percent of all those killed by police, per Reuters. Of course the brave men and women who serve in our police forces are tasked with an impossible job in dangerous circumstances and there’s no doubt many of these instances were justified. And of course we hope our citizens show respect to a tradition that represents this great country. But the numbers represent a disproportionate response from armed officers to blacks than whites which is what all of this kneeling is really about.

Everyone is entitled to their own opinion, but let’s at least make sure we’re arguing about the same thing. 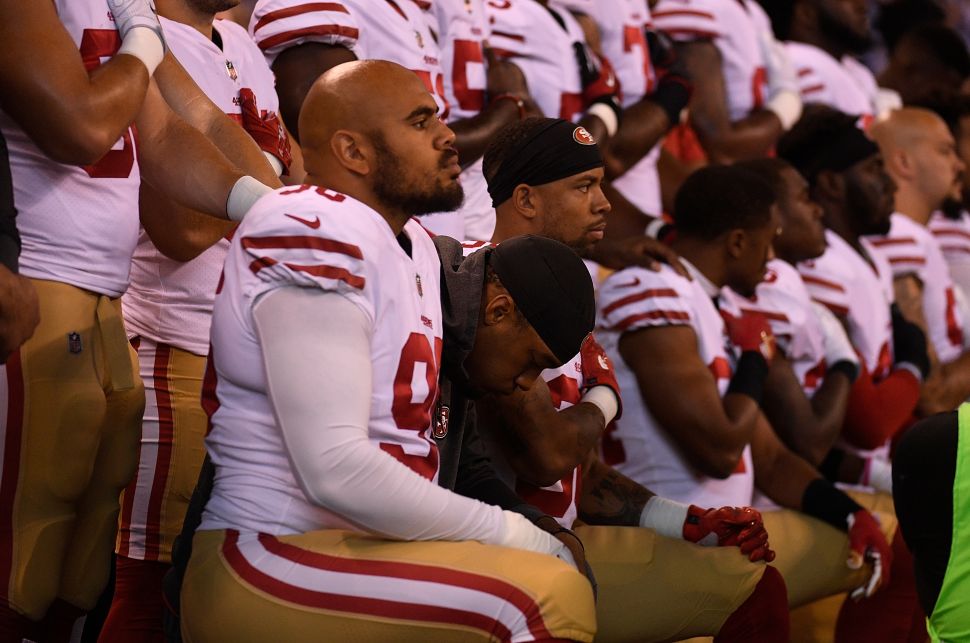