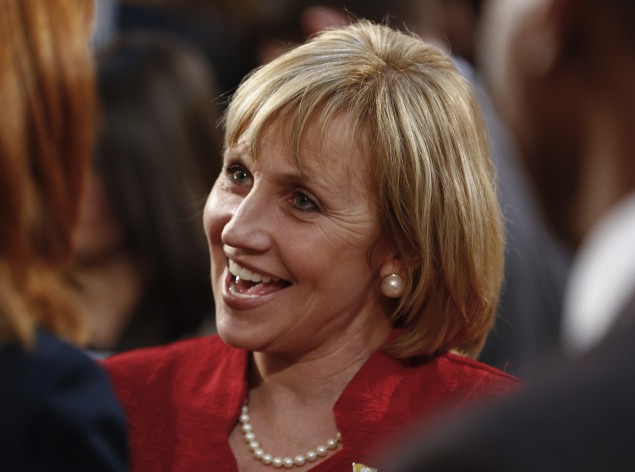 After a fiery first gubernatorial debate, Kim Guadagno stayed on the offensive Wednesday and accused Phil Murphy of having the backs of murderous illegal immigrants.

In a new television advertisement, Guadagno’s campaign seized on Murphy’s support of making New Jersey a sanctuary state that would limit cooperation with federal authorities on immigration enforcement. A male voiceover in the 30-second spot said Murphy “would have the backs of deranged murderers” like an illegal immigrant convicted of killing three people in 2007 after he was previously arrested on child rape charges. Murphy called the ad “vile and deceitful.”

Murphy, meanwhile, was joined on the campaign trail by former Secretary of State John Kerry. Kerry called Murphy patriotic and discussed the candidate’s plan to split the state’s Department of Military and Veteran’s Affairs into two separate agencies.

Attorneys for Sen. Bob Menendez argued for a dismissal of the corruption charges against him. Judge William H. Walls appeared to cast doubt on the prosecutors’ case, openly questioning whether they had shown links between alleged bribes from donor Salomon Melgen and actions Menendez took to help him. Walls could rule on the acquittal motion on Monday.

Defense Attorneys Seek Acquittal for Menendez
Attorneys representing Senator Robert Menendez argued for dismissal of the senator’s corruption trial on Wednesday, arguing after the prosecution rested that there was not enough evidence of a corrupt agreement between Menendez and co-defendant Salomon Melgen to warrant moving forward with the trial.
Alyana Alfaro, Observer Read more

Guadagno Goes on Attack, but Murphy Rebuts Broadsides
Down in the polls and lacking the cash and high-profile endorsements of her Democratic rival in New Jersey’s contest to succeed Gov. Chris Christie, Republican Lt. Gov. Kim Guadagno is going on the offensive, demanding more debates, calling her opponent names and casting his platform as costlier than his promises suggested.
Associated Press Read more

Guadagno attacks Murphy on Weinstein. Murphy calls her ad ‘vile.’
Anxious to rehash moments from the first debate in the New Jersey governor’s race, Lt. Gov. Kim Guadagno on Wednesday attacked Democratic rival Phil Murphy after he said he’d make New Jersey a sanctuary state and then she blasted him for having any connection to disgraced film executive Harvey Weinstein.
NJ.com Read more

Rutgers got $100,000 from Harvey Weinstein — and won’t give it back
Rutgers University reiterated Tuesday that it has no plans to rescind a $100,000 donation made by film producer Harvey Weinstein, who was recently fired from his own company amid sexual assault and harassment allegations made by numerous Hollywood actresses.
NJ101.5 Read more

NJ Transit worried more concrete walls may crumble, this time on Montclair-Boonton line
NJ Transit’s executive director Steve Santoro said Wednesday that a crumbling concrete wall in its Summit rail station may not be the only such structure on the system that’s falling apart.
The Record Read more

Union challenges NJ Transit math: ‘Show us the facts’ on 35 canceled trains
What’s in a number? Plenty when it comes to who to believe about how many NJ Transit engineers unexpectedly took off on Columbus Day, which the agency insists forced them to cancel 35 trains.
NJ.com Read more

How fentanyl went from obscurity to N.J.’s most dangerous drug
In the mid-2000s, the New Jersey Poison Control Center noticed an alarming pattern.
Dozens of people dropped dead in the Camden area after taking fentanyl, a then-obscure-but-powerful synthetic opioid that was being used as a lacing agent in local batches of heroin.
NJ.com Read more

Report suggests NJ commit $600 million for affordable housing — Who would pay?
A new report from the Fund for New Jersey says the state is in a bind – with too few homes residents can afford, too many homes in aging suburbs that have lost their luster and not enough political will to address the challenge.
NJ101.5 Read more

To Be or Not to Be Gerrymandered? That Is the Question.
Will the courts be responsible for drawing congressional and state legislative districts or will the process remain with lawmakers? The U.S. Supreme Court will answer this question and others when it rules on the constitutionality of Wisconsin’s general assembly map.
Jeff Brindle, Observer Read more