For almost 20 seconds, the narrow, vertical, shaky cell phone video showed frightened people cowering, women diving down with their hands over the backs of their heads, a big guy bending over to help someone on the ground.

Others stared blankly toward the big, shiny, casino hotel in Las Vegas. The sniper there fired from its 32nd floor a week ago. On the sound track, you could hear shrieks, cries and shouts of confused people.

Also loud and clear was the pop-pop-popping of the rapid gunfire that pumped fatal bullets into 58 people at an outdoor concert. Nearly 500 more were wounded. Throughout the video, you couldn’t help but hear it: Pop-pop-pop. Pop-pop-pop.

Next to this scene on the split screen was the hard face of Chris Cox, executive director of the National Rifle Association, a powerful political pressure group that helps violent sociopaths use their Second Amendment rights to buy hand-held murder machines.

Most Fox hacks try to torture logic to defend human slaughter, like the 20 kids killed in that Connecticut school and those 49 humans massacred in a gay bar in Florida and, oh, yes, those nine black worshippers murdered in that Charleston church by that Confederate nut boy trying to start a race war.

Wallace asked his guest about legal gun clips that carry 60 to 100 rounds, like those used in Las Vegas.

“Why do you need to have a magazine that has a hundred rounds?”

“It’s a fair question,” Cox said. “If banning one from owning these sorts of things would prevent a criminal from going out and using them, that is a fair question.” Then he said previous bans of semi-automatic weapons were ineffective. Wallace persisted.

WALLACE: “Why do they need magazines with 100 rounds?”

WALLACE: “Think 10 rounds would be enough?”

COX: “It depends on what you have it for.”

Cox then instructed Wallace that a “fair and balanced conversation” about gun safety must include the “violent culture coming out of Hollywood” and all those violent video games. The entire interview lasted about 10 minutes, about as long as the Vegas shooting spree.

Wallace began the segment with a riveting visual: A semi-automatic rifle being fitted with a bump stock accessory to allow killers to pile up warm corpses faster than you can recite the Second Amendment. The murder toy on screen displayed the image of a white skull and the words “Zombie Killer.”

Wallace at first played conversational rope-a-dope, allowing Cox to spout all those half-truths, cynical buzz words and cheap talking points of the radical right wing, and about how Donald Trump supported the Second Amendment in last November’s presidential election and how Hillary Clinton did not.

Then Cox segued into that sanctimonious piety about how people shouldn’t discuss preventing gun massacres right after gun massacres.

“People are grieving,” Cox said. “There used to be a common decency in this country where people paused from talking about policy.” Democrats like Clinton, Nancy Pelosi and Diane Feinstein, he said, “want to exploit a tragedy from Day One. It’s shameful.”

Wallace began to push back, gently at first.

“You say ‘common decency,’” Wallace said. “What’s enough time? Here we have 58 people killed, almost 500 injured. Is it common decency to wait a day? Two days? A week? A month? …What’s wrong with saying ‘We need to address this issue?’”

Cornered, Cox tried to change the subject to what he called the “hypocrisy” of Clinton because, he said, “she will never spend a moment, a breath, without armed security surrounding her for the rest of her life.”

Wallace seemed to have his target in his sites.

“Is that a sensible way to try to have this conversation, to try to turn it into class warfare where, if you’re for gun control, somehow you’re part of an elite?” Wallace asked.

WALLACE: “That is not actually true… If you talk about background checks, if you talk about automatic weapons, there are lot of people—in fact, a majority of people, according to the polls—who’d like to see these gun controls… I know very few people… who have armed body guards. One of the few people I know, private people, who has armed bodyguards, is Wayne LaPierre. To dismiss people and say, ‘Well, that’s just the elite, and they have armed guards,’ it seems to me does a disservice to your argument.”

Then Wallace landed a kill shot. He asked about the Charleston church gunman and how he got a gun after only a 72-hour waiting period.

“When it’s a matter of life and death,” Wallace asked, “couldn’t it be four days or five days?”

Cox tried to duck and cover—figuratively, of course—and change the subject. He said the NRA supported every mental health restriction on gun purchases.

Of course, the other Sunday shows covered the issue in depth, the way they always do after every gun massacre. On Face the Nation on CBS, John Dickerson interviewed LaPierre and let him foam at the mouth.

Dickerson managed to insert “that’s not elite” when LaPierre recited Cox’s talking point about liberals with bodyguards. But LaPierre dominated, thrusting the index finger of his right hand as if it were the business end of a .38.

He talked about gangsters in Chicago. He cited the “anti-gun circus” of Sen. Diane Feinstein, the California Democrat.

LaPierre warned darkly of gun confiscation and of “your glass breaking in the middle of the night” because home invaders are coming to get you. At one point Dickerson said “you’re trying to scare ‘em.”

On ABC’s This Week, panel pundit Matthew Dowd said he owned five guns and lived in Texas and that “most reasonable, responsible gun owners think something should be done.”

Dowd said that, in the last 50 years, more Americans died by gun than in all our wars. He said more people died in those 10 Las Vegas minutes than have died of terror attacks on American soil in the last 10 years.

But if gun confiscation started in the U.S., Virginia Republican Congressman Scott Taylor said, “You’d probably have a civil war.”

On Meet the Press on NBC, host Chuck Todd interviewed Steve Scalise, the Republican congressman from Louisiana who is recovering from a severe gunshot wound.

He stayed true to the NRA line when Todd asked if the right to bear arms is unlimited.

One question that Todd might have asked, in a sensitive way: What it is like to be shot? Does it feel hot? What kind of pain is it?

Little was added to the discussion on CNN’s State of the Union with Jake Tapper where panelists Rick Santorum and Jennifer Granholm wasted a lot of time by talking at the same time.

Nobody came close to Wallace’s artful interview with Cox on Fox.

Had Fox needed mood music while bumping to the commercial, they could have played a Beatles song recorded a dozen years before John Lennon was murdered with a gun.

“Happiness is a Warm Gun,” they sang, with irony. “Bang-bang, shoot-shoot!” 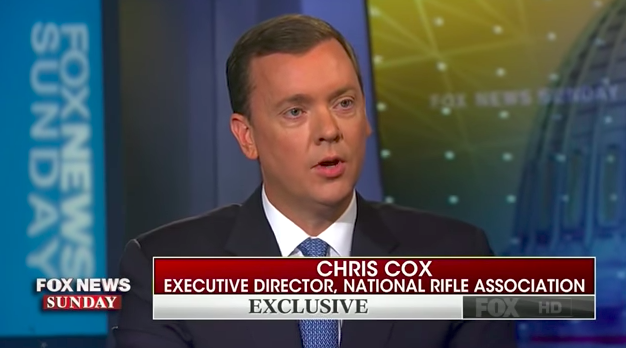