When you’re choosing which new science fiction movie to see this weekend, you realize that what’s currently at the megaplex is not going to top the brilliance of The Bride of Frankenstein or even Arrival. What you hope for is the solid excellence of a Blade Runner 2049, or failing that, the camp appeal of a good-bad flick like Zardoz or Battlefield Earth.

Opera fans are, in fact, very like science fiction fans (after all, opera is the same thing as space opera, only without the space), and we too long for a new work that approaches one of the polar extremes of “masterpiece” or “guilty pleasure.”

Sadly, though, the latest effort of composer Thomas Adès, The Exterminating Angel, which had its American premiere Thursday night at the Met, achieves neither goal. It’s pricey but inept, a Geostorm of the lyric theater.

The trouble, I think, begins with the choice of source material: the enigmatic 1962 film of the same name by Luis Buñuel. An exegesis of this picture, which concerns a group of socialites mysteriously trapped in an elegant drawing-room, is outside the scope of this review, but in a basic way the material seems anti-operatic.

The running joke (if you care to interpret the film as a black comedy) is that these one-percenters are so lacking in affect that when confronted by the supernatural they fall prey to ennui and do nothing but bicker listlessly.

Adès and his librettist Tom Cairns have turned up the dial on the melodrama, exaggerating every plot point and visual element to the point of expressionism. For instance, instead of an offhand request for a spoon to stir the morning coffee (as in the film) the opera offers a mini mad scene for the flaming queen Francisco about how he can hardly be expected to use a teaspoon when a coffee spoon is indicated by proper etiquette.

Iestyn Davies, with his cool but pungent countertenor, strikes just the right note of bitchy triviality in this part. It’s a pity, though, that in condensing the story, Cairns chose to cherry-pick the most repulsive qualities from half a dozen characters and assign them to the gay dude.

But the libretto is subtle compared to Adès’ orchestral music. The more bombastic moments, with screaming brass, thundering percussion and the wail of the Ondes Martenot, left me wondering if Klaatu and Gort were about to make a cameo appearance. And the strenuous vocal lines are as wearing on the ear as they must be on the singers’ larynxes: more whooping and grunting than you’d get in a season’s worth of Elektra.

After slavishly following the film’s scenario for most of its length, the opera suddenly detours in its last 20 minutes or so. One of the guests, opera diva Leticia, launches into an aria describing an apocalyptic vision.

Or so we assume, since the vocal line drives the gifted soprano Audrey Luna into an insanely high dog-whistle register where the text all sounds like “eep-eep-eep.” And then all hell breaks loose. Bells ring, people scream, the orchestra almost literally explodes and then…

Well, what should happen next is a version of the film’s denouement: the rescued party guests attend a Mass of thanksgiving, only to discover that now they can’t escape from the church. But instead of this ironic close, the opera opts for what you might call the “Stephen King” finale: the house comes to life and eats everybody.

There are a few things to admire in this opera, including the composer’s virtuosity in creating viscerally exciting walls of sound, as well as some subtle performances in supporting roles from veteran singers like Rod Gilfry and Alice Coote.

But mostly The Exterminating Angel inadvertently creates a sense of empathy for its unsympathetic characters, as we in the audience get to experience first-hand what it feels like to be trapped. 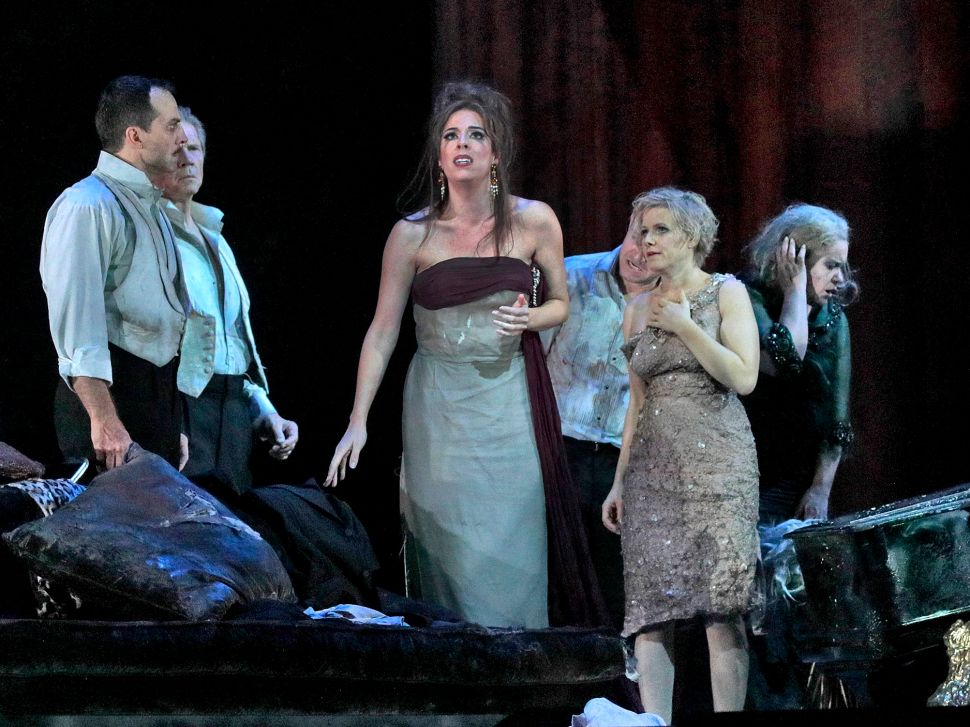