“You cannot [only] be involved with the charity on weekends and run the business during the week,” Michael Milken, chairman of Milken Institute, summarized PepsiCo’s “performance with purpose” mantra during his interview with PepsiCo’s CEO Indra Nooyi at Milken Institute’s Future of Health Summit yesterday.

Nooyi joined PepsiCo in 2001 as CFO and was promoted to CEO in 2006. She is known for drastically reconstructing PepsiCo’s strategy in the last decade and overturning the brand’s image from a “last-generation” sugar-laden beverage that gives you diabetes to a cool, environmentally responsible company that attracts millennial workers.

“When I took over as CEO in 2006, I realized that things had to change,” Nooyi said at the summit. Sensing that millennials want to both eat healthy and work for socially responsible employers, Nooyi tied the two needs precisely to the ends of PepsiCo’s business: product line and employees.

Nooyi reworked the company’s product portfolio, moving focus away what she called the “fun-for-you products,” such as soda drinks, Cheeto and Fritos, and raising stakes in the “good-for-you” products, mainly through acquisitions. PepsiCo acquired Tropicana in 1998 and Quaker Oats in 2001, the two flagship “good-for-you” products Nooyi highlighted in the talk.

However, corporate culture, in essence, is the the culture of its people. And that is more challenging than rewriting a menu.

“Millennials want to work for a company that has a purpose and is making a difference to the world. To attract and retain the best and the brightest to our company, we had to create an environment that allows people to bring their whole selves to work. That was daunting task,” she said.

She continues, “You can’t get rid of people who performed well in the old model,” Nooyi said. “But we gave them time. I said, ‘If you don’t get on to the new agenda in the next 12, 24 months, there are going to be a lot of retirement parties.’”

And there were quite a few, she said.

PepsiCo is a rare survivor in the “legacy company” league, the likes of Nestlé, Kroger and Walmart, many of which are struggling to stay profitable, let alone make social impacts. 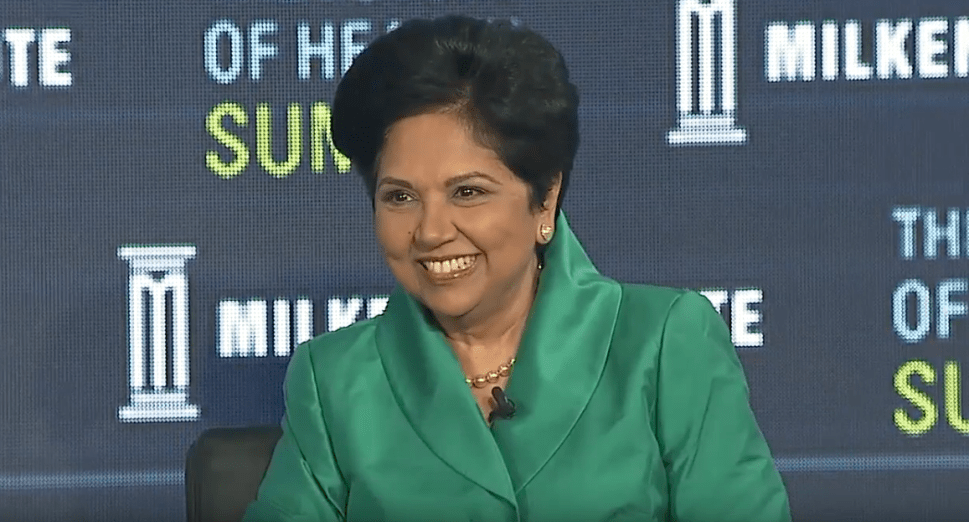