The devastation Hurricane Maria brought to Puerto Rico last month left the island in tatters. And now, many want to leave.

Florida Gov. Rick Scott released a statement on Monday saying the state is opening up disaster relief centers at various locations for those decamping Puerto Rico, as power remains out for the vast majority of the 3.4 million people living there.

Many of those evacuees are making their way to the mainland U.S. with the aim of staying, which it is their option and right to do as American citizens.

On Sunday, nearly two weeks after the Category 4 storm, activists and legislators in the Orlando area—a stronghold of the Puerto Rican community in a state where votes have shifted to the center and left of center in recent years—gathered to urge state leaders to do more for the catastrophe-struck nation, The Tampa Bay Times reported.

“To prepare for this influx of hundreds of thousands of Americans to Florida, we believe it is vital that the state responds proactively to ease the impact on state and local governments and reduce the challenges that evacuees themselves will face,” Florida Rep. Amy Mercado, a Democrat, told the press.

This is a tall order for a state that has had a Republican majority for two decades. Republican Gov. Rick Scott has emphasized helping our fellow Americans—the huddled in masses and surrounded by destruction—down there, not up here.

Scott’s language is not-so-subconsciously geared toward letting Puerto Ricans know the Sunshine State’s resources are being rallied in true American fashion: by deployment.

Every sentence of a statement issued by Scott’s office on Monday had “Puerto Rico” in it at least once. Key words intoning a “help-is-on-the-way” message were generously sprinkled throughout the governor’s comments.

“As Puerto Rico continues to respond to and recover from Hurricane Maria, Florida stands ready to deploy all available resources and personnel to our neighbors to help in these efforts,” Scott said in the statement. “The crisis in Puerto Rico is unlike anything we have seen before and Florida is going to do everything in our power to help everyone impacted by this storm get back on their feet. I will continue to make sure that our state leaders are in contact with officials in Puerto Rico. The State of Florida stands with Puerto Rico and will keep working to make sure they have everything they need.”

But will the real impact be to local, county and state agencies on economic, social or political issues?

Puerto Ricans have played an outsized role in shifting the state’s politics toward the center. Are Gov. Scott or President Trump—whose home away from home away from home is Florida—worried about a wave of Democratic voters coming to throw a wrench in next year’s election cycle?

Trump, on the other hand, seems aloof about the seriousness of the potential for political change in Florida, which is now the third-most populated state in the country, with more than 20 million citizens.

To emphasize the point, he dedicated a golf trophy of a 20-year-old, PGA-founded tournament round recently to the people of Puerto Rico. In the process, he reinforced the misnomer among more than half of Americans that Puerto Ricans aren’t U.S. citizens. (They are; they just don’t have presidential voting rights.)

Trump announced last week that he would head to Puerto Rico on Tuesday to oversee the recovery efforts after Hurricane Maria swept over the U.S. territory.

Trump will seek reelection in three years, and Scott is running for U.S. Senate in 2018. How much they help Puerto Ricans in dire need will be remembered come election season. 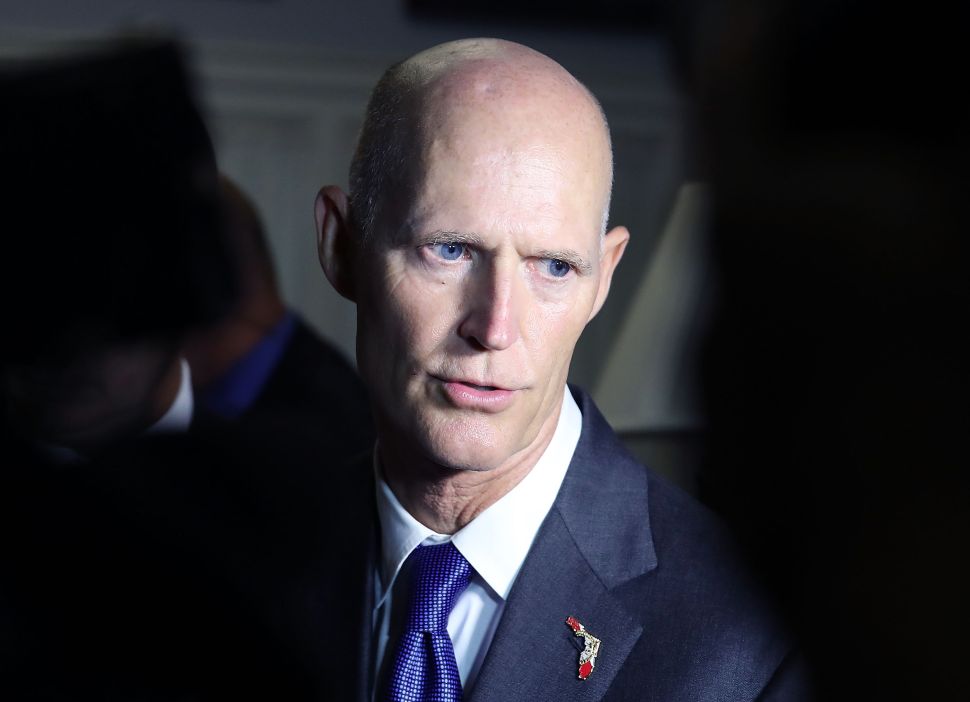