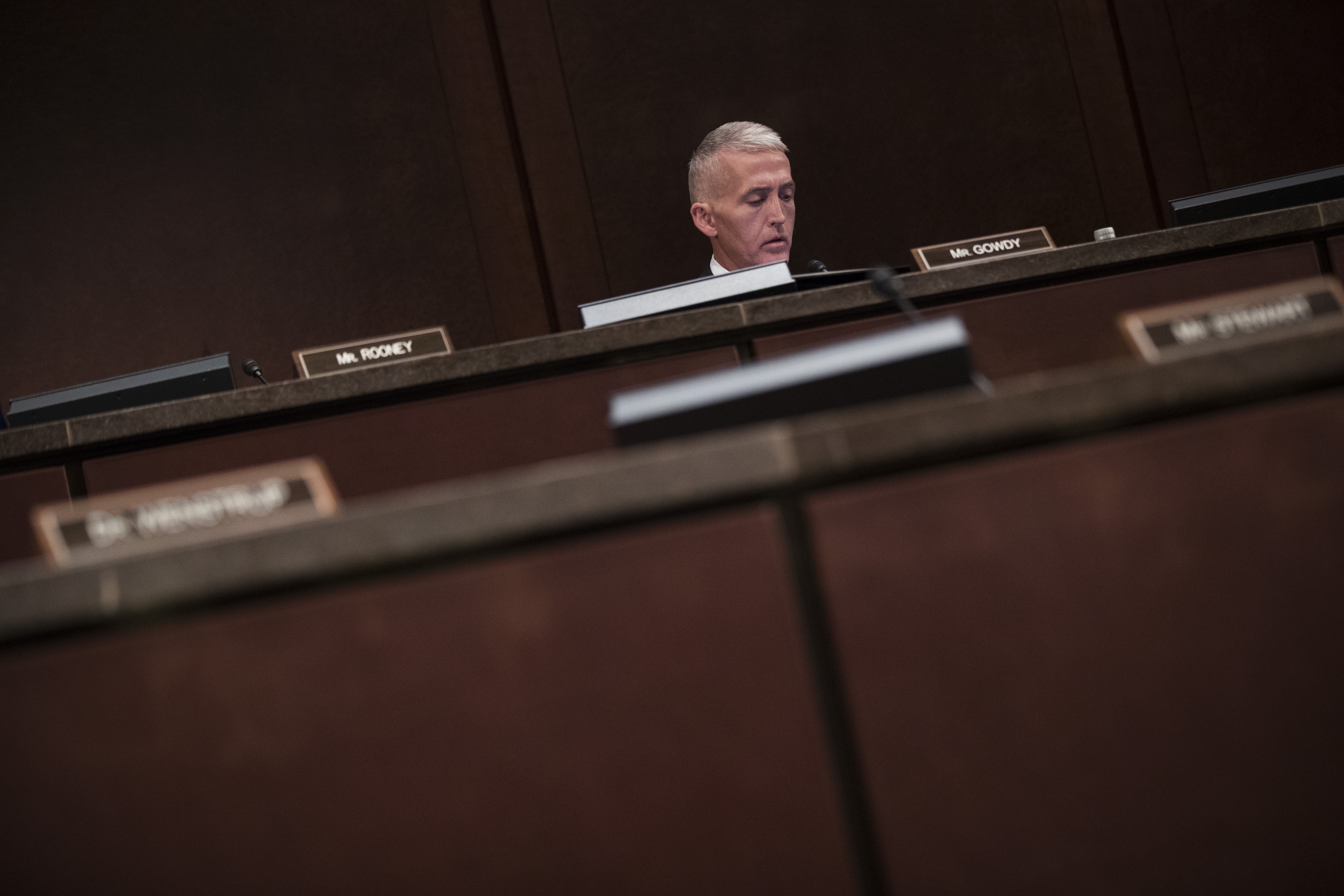 With rumors of indictment wafting in the chill autumn air of Halloween week, right-wing media outlets are reviving their witch-hunts of Hillary Clinton. They cast clouds of smoke and fog to blur your gaze of the probe into the cronies of amateur President Donald Trump.

Instead, Fox News Channel (in particular) wants to know: Did Clinton’s presidential campaign pay for that dossier about Trump’s sleazy behavior? And did she take a bribe so Russia could steal our uranium seven years ago?

Pay no attention, these Trump-fluffers urge, to the grand jury indictment that could be announced on Monday by special counsel Robert Mueller, who is looking into Russian efforts to help Trump beat Clinton last November.

Not so fast, said several powerful Republicans Sunday. One was Congressman Trey Gowdy, chair of the House Oversight Committee. He spoke with Chris Wallace on Fox News Sunday.

“He’s a pretty apolitical guy,” Gowdy said of Mueller. “I would urge my Republican friends to give the guy a chance to do his job. The result will be known by the facts, by what he uncovers.”

Most of the Sunday shows buzzed about the indictment, first reported Friday by CNN and almost ignored by Fox and much later touted on Fox as if it was a Journal scoop. (Rupert Murdoch controls both).

Some Sunday talkers speculated that Trump might create a crisis by pardoning indicted persons or by forcing the Justice Department to fire Mueller.

Another Republican, Senator Rob Portman of Ohio, supported the special counsel when interviewed on Meet the Press on NBC by host Chuck Todd.

“Are you concerned at all that the president might, you know, issue pardons too soon?” Todd asked. “Is there something Congress plans on doing if they think he’s going to pardon people or maybe fire Mueller?”

“Let’s let him get to the bottom of it,” Portman said.

Todd showed video of Trump on the White House lawn, claiming as if possessed by Sean Hannity’s spirit that Mueller’s investigation into Trump’s campaign is fraudulent.

“This was the Democrats coming up with an excuse for losing an election,” said the large, loud, 71-year-old, red-necktied, orange-faced, yellow-haired demagogue. “They lost it by a lot. They didn’t know what to say. They made up the whole Russia hoax.”

TODD: “Do you agree with the president?”

PORTMAN: “Too defensive… We need to get to the bottom of it.”

This week’s progress in the investigation might loosen the lips of timid Republicans reluctant to speak out in the manner of Tennessee’s Bob Corker and Arizona’s Jeff Flake.

Both departing senators have been forced to retire by militant nationalists and religious fundamentalists supporting Trump from the extreme right wing of the GOP.

With the aid of Trumpist rabble-rouser Steve Bannon of Breitbart News, Trump supporters will challenge other office-holders in Republican primaries if not sufficiently loyal to Trump.

So Republicans hoping to hold onto their seats have bitten their tongues in hopes of teaming with Trump at least in the short term to inflict cruel changes in tax and health insurance law to take money away from poor, sick people and give it to rich, healthy people.

Oh, and the gossip behind the scenes in the capital! On Face the Nation on CBS, panelist Julie Pace of the Associated Press told John Dickerson of a tense mood among Republican senators in private when discussing the increasingly vindictive and erratic chief executive.

“I have senators who say things that are just astounding to me,” Pace said. “Things about a president from their own party. Publically, however, it’s a much different story.”

As for Republican hopes that the investigation would soon end, Pace said: “The Mueller investigation is not winding down, which is what the White House wants people to think right now.”

A third significant Republican, Governor Chris Christie of New Jersey, was asked by CNN’s Jake Tapper on State of the Union if he thought Mueller should step down.

“He has to be very, very careful that the public believes that he has no conflicts, that his integrity is unquestioned,” Christie said. “I’ve not yet seen anything that makes me think he must step down.”

Another Tapper guest, Independent Senator Angus King of Maine, noted the timing of the right-wing attacks against Mueller and Clinton and the looming indictment in the probe of the Trump gang.

“I don’t see any reason why he should recuse himself or be fired or anything else,” King said of Mueller. “These charges are suddenly coming in kind of a crescendo at the very time it appears there are also indictments to be forthcoming. There is a kind of coincidence there that I don’t think you can miss.”

Less droll was another guest, Preet Bharara, the former U.S. Attorney in New York who was fired by Trump. Tapper asked him if Trump might send messages of intimidation or reassurance to indicted targets of Mueller.

“That is something I would watch very, very closely,” Bharara said.

“The President of the United States routinely lies and brings misinformation and disinformation to the table and tries to make the conduct of others—particularly Hillary Clinton—the issue,” Bernstein said. 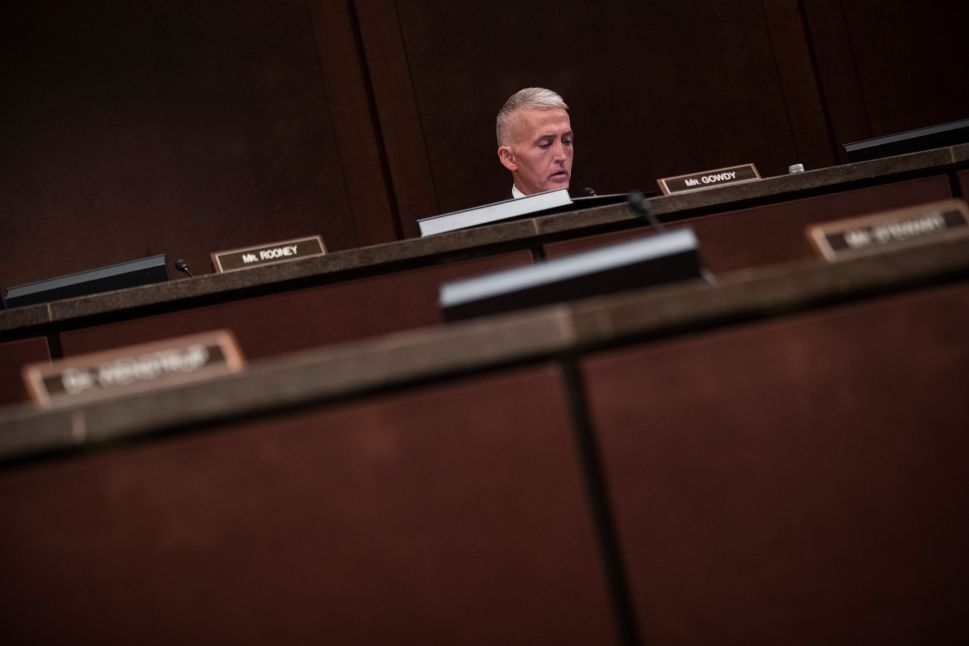