The second survival in the snow movie in a week, Walking Out, sparsely written but vigorously directed by the brotherly team of Alex and Andrew Smith, is far superior to The Mountain Between Us. In this outdoor thriller, David (Josh Wiggins), the 15-year-old son of divorced parents who lives with his mother in Texas, arrives in the snowy beauty of Montana on a forced visit with his father Cal (TV heart-throb Matt Bomer, playing against his usual suave, shaved, carefully groomed type with a grizzled, shaggy acting style of refreshing candor). Father and son hardly know each other, but while Cal is determined to share his passion for the wilderness and make a man out of the boy, David resists with dedicated distrust and downright fear. As the adventure grows to a near-death experience, both emotions prove well-founded and father and son learn to depend on each other to survive.

David is all too aware of why his Dad’s world was too rough and punishing for his Mom to endure, and resists every effort Cal makes to wean him off so-called “civilized ways,” like cell phones, video games and fast-food chains. As soon as he arrives at his father’s crude home, his life turns into a boot camp and he’s dragged out of bed before dawn to go moose hunting, learn the ways of the dangerous landscape, and search for enough game to provide food for the winter. David is thoroughly miserable, but reluctant to get sent back home defeated and disgraced. Cal’s determination to grow callouses on his kid’s soft ways are intercut with flashbacks to his own childhood 30 years earlier, when he killed his first moose with David’s grandfather (a craggy Bill Pullman) as a mentor. When today’s adult trail finally leads to the moose he expects David to kill, they find the animal already freshly killed—torn apart by something craving blood and totally terrifying. David is relieved he won’t be forced to pull the trigger, but when Cal kills a bull elk instead, the boy throws up in disgust. Just when the father is ready to give up and declare his boy a lost cause, they come upon a grizzly bear whose cub has been killed by the rogue bear that killed the moose. His hand badly injured by the bear’s teeth, David climbs a tree and fires his rifle, hitting his father accidentally—and it’s the boy’s job to go for help, dragging himself down the mountain in a blizzard, trailing blood with his father on his back in a dead hold. As impossible as it seems, their lives depend on the boy’s quick ability to prove his manhood before his time.

There are moments of surprise humor, as in the scene where David eats the bear cub to stay alive. “Baby bear sushi,” he jokes, the way kids do, finding a sense of humor he didn’t know he had. By nightfall, they figure out a way to cook the cub, which prompts Dad to add, “Better than any brisket in Texas.” At other times, its challenges are reminiscent of the grim and gruesome Leonardo di Caprio thriller The Revenant. The suspense is mostly in the life-threatening trip down the mountain while the boy tries not to get lost carrying his unconscious father, but the film also works in some macho life lessons in a hunter’s code of ethics. (Never kill anything except for food.) Nothing new here, but Walking Out is a skillfully made thriller with a pair of very talented actors who knock themselves out, in more ways than one, to guarantee that it never becomes boring. Beautifully enhanced by the camerawork of Todd McMullan, it’s basically a two-hander about a boy who proves to be a man without a compass and keep his Dad alive without freezing to death, and a proud two-fisted father who learns to depend on a boy who turns out to be more of a man than he ever suspected, while the viewer tries to figure out what the point of the movie is without living up to its title. You won’t walk out of Walking Out.

‘The Mountain Between Us’ Stars Separated by Miserable Lack of Chemistry
Justin Long Deserves Much Better Than Trite ‘Literally, Right Before Aaron’
Jeremy Kagan’s ‘Shot’ Is a Sobering Plea for Gun Control
Grim ‘Last Rampage’ Saved by Superb Acting
You Won’t Be Bored by ‘Battle of the Sexes’ 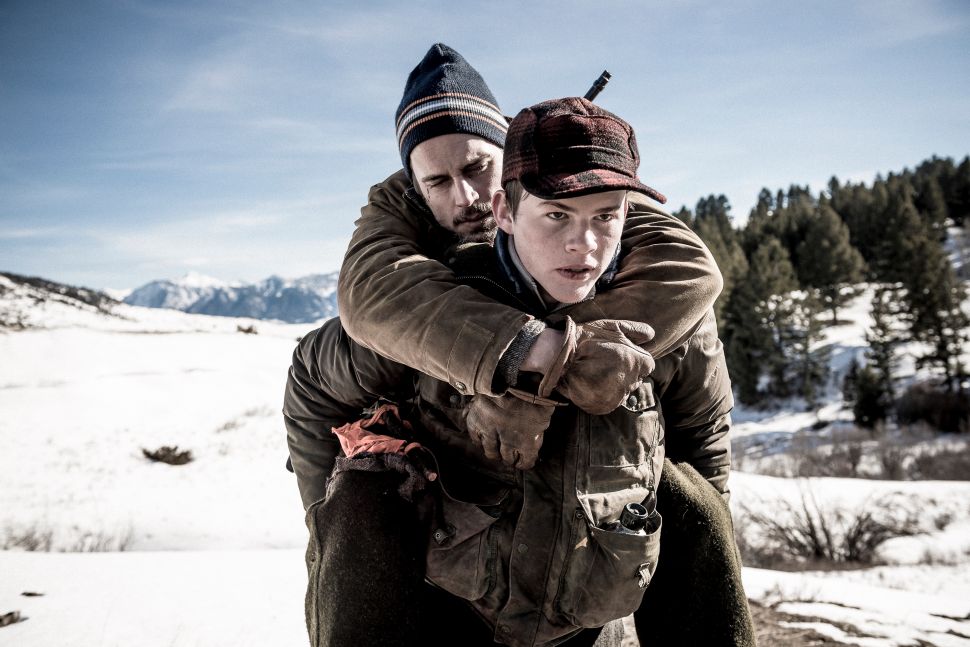