When amateur President Donald Trump insults his many enemies, he uses nicknames that belittle and demean. They include “Lyin’ Ted,” “Rocket Man” and “Liddle’ Bob Corker.”

Why not one for Secretary of State Rex Tillerson? How about “T-Rex?” After all, Tillerson made a fortune in fossil fuels and he’ll probably become extinct very soon, at least from his current job.

Oh, we know oil doesn’t really come from dead dinosaurs, as many people believe. But Tillerson is the rogue, living elephant in the GOP day-care center of the Trump administration. According to recent reports, Tillerson called Trump “a f—ing moron” after Trump lusted for more nuclear bombs.

When interviewed Sunday by CNN’s Jake Tapper on State of the Union, Tillerson refused again to deny the quote.

Tapper persisted by saying Tillerson’s refusal to deny it “makes people think that you probably did say it. So, can you please clear it up?”

Nor did he wish to comment on the observation by Sen. Bob Corker of Tennessee that Trump has “castrated” Tillerson.

TAPPER: “You have a cattle ranch. You don’t want to say anything about the senator suggesting you’ve been gelded…?”

Tillerson also appeared on Face the Nation on CBS with John Dickerson. When Dickerson asked Tillerson about Trump’s recent attempts to undermine Tillerson’s talks with nuclear-armed North Korea, Tillerson dismissed the question with, “Our diplomatic efforts will continue until the first bomb is dropped.”

Tillerson’s rival in the foreign policy wing of the Trump administration is Nikki Haley, the ambassador to the United Nations. She appeared on both NBC’s Meet the Press with Chuck Todd and ABC’s This Week with George Stephanopoulos.

She scoffed at reports of a feud with Tillerson.

“So dramatic,” she told Stephanopoulos. “So ridiculous.”

But she never denied it, she never said “no,” even when pressed further by Todd about a Politico report that compared the tension between Tillerson and Haley to World War III.

As for Corker’s comment that Trump had castrated his secretary of state, Haley said, “I’m not going to get to the drama of the ‘he said-he said’ situation… If there is a problem, that’s really a question for Secretary Tillerson.”

The shows came after an unusually busy week of Trump’s destructive words and deeds.

He also pandered to right-wing Christians at the “Values Voters Summit,” a religious meeting that brings together extremists and hate groups, according to the Southern Poverty Law Center.

But much of Sunday’s chatter kept coming back to Trump’s relationship with Tillerson and Corker’s critical comments about the White House being an “adult day-care center.”

Regarding Corker, Molly Ball on CBS added, “Republicans are not afraid of Trump anymore.”

But the harshest among the CBS opinions came from Jonah Goldberg, a conservative writer for the National Review, who reflected on Trump’s recent past as the host of reality TV show and said Trump has “broken the barrier between reality-show culture—TV culture—and politics.”

“And he’s also ‘the talent,’” Goldberg added. “And he wants to be treated like the talent, not just the boss… And that’s why we keep having these eruptions. This Corker episode is not the last one… That’s ‘The Trump Show.’”

In that art imitates life, the funniest and most caustic comments about “The Trump Show” came from NBC’s Saturday Night Live.

First, Alec Baldwin portrayed Trump saying of Tillerson “What a dum-dum-dum-a-roony. And he has the nerve to call me a moron. Talk about the pot calling the kettle Mexican.”

“Secretary Tillerson did not call the president a moron,” “Conway” told “Cooper” from inside a sewer grate. “They were sharing a sundae and the president asked if he wanted more sprinkles and the secretary said ‘more on.’” 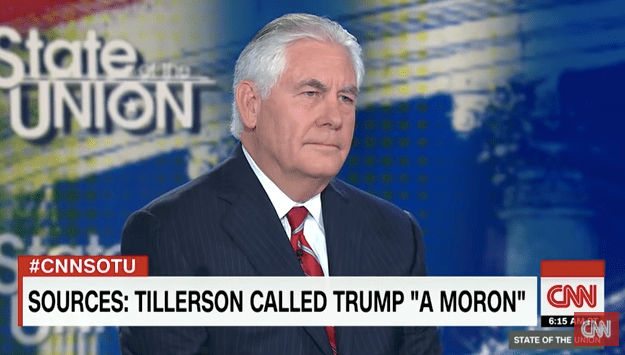