There’s no question that Arizona Republican Jeff Flake is Washington’s man of the minute. He’s gone viral. His stunt on the Senate floor was cable-news-bite made and Twitter-bourne. If your political career is imploding as Flake’s is, what better way to change the conversation than by scoring a goal on your own team?

But there’s more to the story. We shouldn’t be so satisfied with what’s on the surface. As politicos, Trump-haters, and Democrats revel in Sen. Jeff Flake’s “bravery” let’s take a step back and remember a few facts. First, his calculation is entirely political: If he had a shot a re-election, if his numbers hadn’t tanked on the right and he hadn’t drawn a top-tier challenger from the left, there would be no Bullworth moment and Mr. Smith would not have gone to Washington. Don’t try to spin it for a second that if Mr. Flake had a shot at re-election that he would be standing up, saying “enough,” and calling out complicity.

In fact, while we’re talking movies, his is way more of a Jerry Maguire moment. His crisis of conscience has been brought on as his party’s internal engine fell, eaten by a culture he helped create and abet.

It always ends up with Andy Shepard, the wisest man in politics, who said “politics is perception.” That’s especially true where we find ourselves now, on this fly-leaf between the two chapters of Jeff Flake.

The reality is that the senator is an arch-conservative. True, he’s not a fire-breather, and his permanent tan, easy grin, and tousled sun-kissed locks give him an amiable, nice-guy laid-back vibe. Despite his family’s nasty and masterfully hushed-up PR crises, he’s a devout Mormon with the image to prove it. He’s conservative, but he’s not a mean, bomb-throwing, burn-it-down provocateur sent to wage holy war. He’s not Steve King or Roy Moore. He’s National Review, not The Daily Stormer.

And that’s his exact problem.

Jeff Flake voted in lockstep with Donald Trump. He’s not Susan Collins or Lisa Murkowski, who have opposed the president and their own leadership. In fact, he’s not even Dean Heller, who publicly flip-flopped and danced a coy dance of the seven veils on health care (and literally handled that issue worse than anyone—anyone—by trying to please everyone but managing to please no one).

In Republican politics today, it’s not your vote that matters. It’s how publicly devoted you are to Donald Trump, and that’s where Jeff Flake failed and why his political career is over. Unless you worship the Golden Calf of Trump, you’re insufficient. Pilloried and primaried.

It’s not whether you vote like a conservative—favoring small government, strong defense, business, and fewer regulations—you need to act the part. You’ve gotta go full Breitbart. Granted, Flake was publicly critical of Trump and the general crack-up in Republican circles that accompanied his rise. But there’s no denying his votes were there. And that proves—as if proof were needed—that today’s politics are not about making laws and setting policy. Today’s politics are about performance.

Bob Corker is in the same boat. He is another John Foster Dulles-type failing to make sense of the GG Allin set that is Republican politics. He voted for Trump’s policies and nominees, endorsed him (unlike Flake, who waffled, especially over the Access Hollywood tapes), and gave him irreplaceable foreign policy credibility during the election. Corker likely thought Trump would abandon campaign tactics once he was in office and govern like a traditional Republican or at least stand aside while Congress did the work. Camp Corker’s criticism didn’t emerge until President Trump turned out to be… exactly who he promised he would be. Now Corker is attacking Trump and his right-flank has deteriorated as a result, forcing him to retire. He’s speaking openly about the debasement of American values under a man utterly unqualified and unable to perform even the simplest functions demanded of a president.

Both senators, like most other Republicans who have had the spine to speak out against Donald Trump, never have to face Republican voters again. That’s what unites them. Jeff Flake, Bob Corker, John McCain, Mitt Romney, John Boehner, George W. Bush, George H.W. Bush, Jeb Bush, Charlie Dent, Ileana Ros-Lehtinen… the list goes on.

Most other sitting legislators share their opinions, anger, fear, and maybe guilt—if that’s an emotion they’re capable of. But until they no longer need to face the reactionary, red-faced conservative base, they all fall in line. They aren’t exactly profiles in courage.

So Bob’s uncorked, Jeff’s unfettered and McCain, facing mortality, is in legacy creation mode. Zero fucks given. What remains to be seen is what they do with this new freedom. It’s an extraordinary opportunity. There will likely be other retirements, so this group may grow. They have 15 months to raise their voices, fists and bring on the fight that they all so miserably failed to bring in the first place, when, frankly, it mattered more. 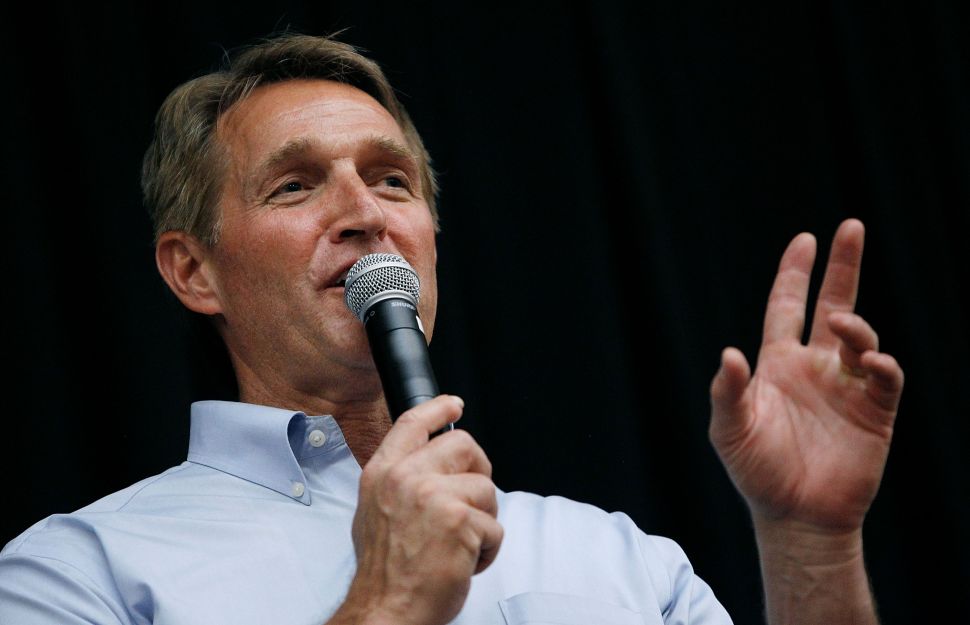