Sprint and T-Mobile aren’t getting together after all.

SoftBank Group, which owns Sprint, has called off a planned all-stock deal that would have merged the two wireless companies. According to the Japanese newspaper Nikkei, SoftBank and T-Mobile owner Deutsche Telekom couldn’t agree on ownership terms for the combined entity.

Deutsche Telekom allegedly insisted on a controlling stake in the new firm. While SoftBank initially approved this setup, the company’s board decided at a meeting Friday that they would not give up control after all. As such, the talks were called off.

Sprint reportedly plans to make a significant investment in its network now that merger talks have stalled.

T-Mobile and Sprint are the third and fourth most popular wireless carriers in America, with 71 million and 54 million customers respectively. But they trail far behind Verizon and AT&T, the two largest U.S. carriers with 147 million and 139 million subscribers.

SoftBank tried to buy T-Mobile once before, in 2014. But the idea was abandoned after opposition from antitrust regulators, who thought only having three major wireless carriers would reduce competition and hurt consumers. Similar fears also allegedly played a part in today’s decision.

Both Sprint and T-Mobile skipped out of earnings calls last week, reportedly to avoid talking about the merger.

Shares in all four major wireless carriers were down as a result of the news—Sprint stock plummeted nine percent and T-Mobile was down five percent. AT&T and Verizon shareholders were apparently discouraged by the fact that their competitors were staying put—shares in both were down about two percent.

SoftBank and Deutsche Telekom don’t trade on Wall Street, but SoftBank stock was down three percent on foreign markets. Deutsche Telekom shares were actually slightly up, so European traders may think the company dodged a bullet. 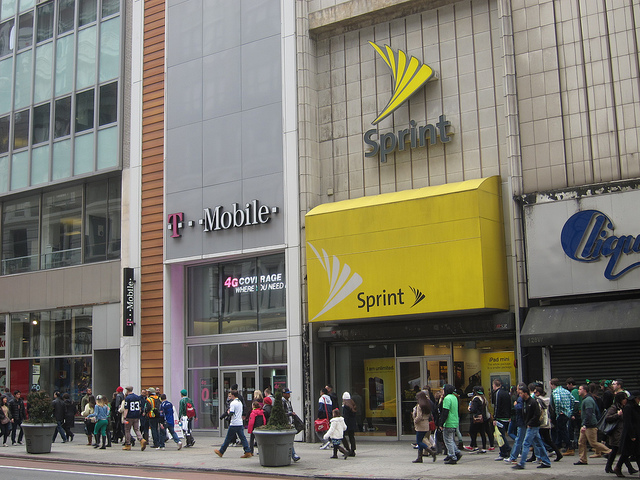