I finally figured out what’s bothering me about Google’s new Pixel 2 phone.

It doesn’t have a headphone jack.

Not that I regard the missing port as important. Indeed, when Apple did it away with it on the iPhone 7 a year ago, triggering a predictable public freak-out, I defended the move in this space. If the history of personal technology shows anything, I argued, it’s that digital and wireless always trump analog and wired. I still feel that way.

No, what bothers me about the Pixel 2’s lack of a headphone jack is how Google made such a big deal just last year that the original Pixel phone had a headphone jack. “Satisfyingly not new” was Google’s smug shot at Apple then. But now that Apple has made it safe, Google suddenly does a 180. Wireless is in, wired is out.

The flip-flop on the headphone port is symptomatic of the real problem with Google’s approach to its own smartphones: a total lack of boldness or innovative thinking. The Pixel 2 and its larger sibling, the Pixel 2 XL, are lovely phones that manage to take no risks, blaze no new paths and, as a result, generate little positive excitement.

Indeed, any excitement so far around the new Pixels has been decidedly negative.

They have had a rocky rollout, with user complaints about muted colors, a bluish tinge and ghostly images “burning in” on the XL model. Google has responded by defending the LG-made display but promising software updates to address some of the issues and announcing a doubling of the warranty, to two years, to provide Pixel buyers peace of mind.

For whatever it’s worth, I haven’t encountered the burn-in issue and haven’t found the supposed tinge to be a major distraction. It’s true the colors seem more muted than on other devices I’ve used that feature OLED display technology, which usually results in vivid, even over saturated colors. But Google says the Pixel 2’s palette is the result of a conscious decision to try to render colors more realistically. (Even so, it’s also promising one of those software updates will add a new mode for more color saturation.)

Each Pixel model comes in 64 gigabyte and 128 configurations. The Pixel 2, with a five-inch diagonal screen, will run you $649 for the smaller capacity and $749 for the larger; the Pixel 2 XL, with its six-inch screen, runs $849 and $949. Verizon is the exclusive major U.S. carrier at launch, though I’d personally be inclined toward buying the Pixel 2 directly from Google and using its own, awesome Project Fi wireless plan instead.

My problem with the Pixels is that, for all their state-of-the-art features, there’s little to distinguish them from the legion of excellent Android phones already on the market—such as Samsung’s elegant Galaxy S8—let alone anything about them as audacious as what Apple is trying with the iPhone X, which goes on sale later this week.

Do the Pixel 2 and Pixel 2 XL have excellent cameras? Yes, they do—single-lens shooters with a portrait mode, both of which compare favorably with the dual-lens setup Apple uses on its iPhone 8 Plus. But is there anything new about them that will matter to most casual photographers? Nope.

Is the software polished and powerful? Yes—the Pixel 2 and Pixel XL both run Android 8, AKA Oreo, the latest version of Google’s operating system. And because the Pixels are designed by Google itself, they aren’t larded up with the duplicative apps and crapware that other handset makers and carriers are fond of adding to Androids. On the other hand, many of Oreo’s new features are under-the-hood improvements; the user-facing changes are pretty minimal.

Are the phones nicely designed? Yes, though the XL model is sleeker thanks to its smaller top and bottom bezels. But about the only thing distinctive about them is the ability to summon Google Assistant, Android’s artificial-intelligence agent, by squeezing the bottom half of the phone.

It’s a novelty borrowed from HTC, the handset maker deeply involved in making the Pixel for Google. But I’m unclear on why squeezing is a better way of reaching the assistant than simply saying, “O.K., Google.”

Meanwhile, the iPhone X is replacing the now-ubiquitous fingerprint sensor with facial recognition software that is supposed to let you unlock your phone just by looking at it. And its elimination of the Home button, a fixture since the first iPhone, means users will have to learn entirely new methods for waking the display, summoning the home screen, switching between apps and the like.

Are all those iPhone changes a good thing, or a bad thing? We’ll start to have some answers in a few days. But one thing is pretty certain: If the iPhone X is successful, expect to start seeing similar features in the Pixel 3. For Google, “satisfyingly not new” means bringing up the rear when it comes to thinking different. 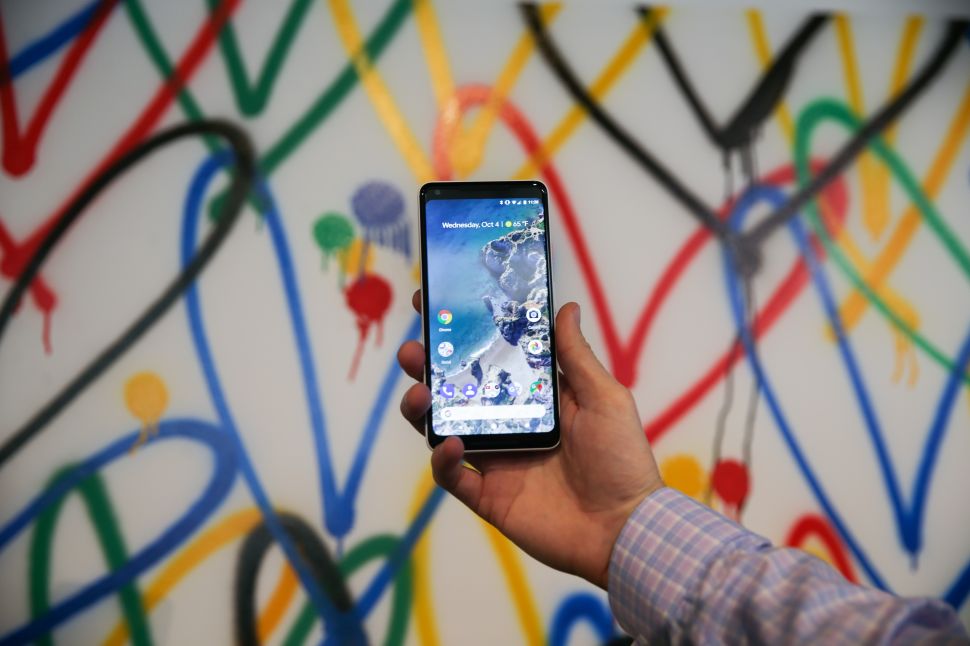