At age sixty-seven, Thomas Edison returned home early one evening from his work for dinner with his family. He was then America’s most famous inventor, enjoying his eminence and financial success. But this tranquility was threatened permanently that evening when, as he finished eating, a man came rushing into his house with urgent news: A fire had broken out at Edison’s research and production campus a few miles away.

Fire engines from eight nearby towns rushed to the scene, but they could not contain the blaze. Fueled by the strange chemicals in the various buildings, green and yellow flames shot up six and seven stories, threatening to destroy the empire Edison had spent his life building.

Edison calmly but quickly made his way to the fire, through the now hundreds of onlookers and devastated employees. Finding his son standing shellshocked at the scene, Edison would utter these famous words: “Go get your mother and all her friends. They’ll never see a fire like this again.”

Don’t worry, Edison calmed him. “It’s all right. We’ve just got rid of a lot of rubbish.”

Years and years of priceless records, prototypes, and research were turned to ash. The buildings, which had been made of what was supposedly fire-proofed concrete, had been insured for only a fraction of their worth. Thinking they were immune to such disasters, Edison and his investors were covered for about a third of the damage.

Yet despair was not the reaction that Edison turned to. He did not weep. He did not rage. He did not throw himself into the flames.

Instead, he got to work. He told a reporter the next day that he wasn’t too old to make a fresh start, “I’ve been through a lot of things like this. It prevents a man from being afflicted with ennui.” The fire that destroyed his life’s work actually invigorated him.

This is a story I have had the fortune to be able to tell all over the world to audiences of entrepreneurs, professional athletes, executives, journalists, ordinary people, even a TEDx stage. Without fail, the crowds titter and laugh in disbelief at Edison’s line. It’s almost too perfectly timed, too inhuman to comprehend.

But the truth is it is not particularly unusual. The Stoics loved the metaphor of fire. Marcus Aurelius would write that “a blazing fire makes flame and brightness out of everything that is thrown into it.” That’s what Edison did. Faced with an enormous obstacle that would have devastated other mortals, he absorbed—burned it for fuel—and was made better for it. Because that’s what entrepreneurs do. It’s what makes them who they are.

Within about three weeks of the fire, Edison’s factory was partially back up and running (thanks in part to a loan from his friend Henry Ford). Within a month, its men were working two shifts a day churning new products the world had never seen. Despite a loss of almost one million dollars (more than $23 million in today’s dollars), Edison would marshal enough energy to make nearly ten million dollars in revenue that year ($200 plus million today). He took a spectacular disaster, and turned it into the spectacular final act of his life.

Nietzsche’s recipe for greatness was the phrase amor fati. “That one,” he said, “wants nothing to be different, not forward, not backward, not in all eternity. Not merely bear what is necessary, still less conceal it…but love it.”

In my pocket I have a coin (which I had minted myself) that says those words on it. The reason? To remind myself that nothing bad can really happen—there is only fuel. That everything I face can be of some purpose (or at the very least keep life from being boring). Robert Greene, who helped me design the coin, has talked about the power of amor fati as being “so immense that it’s almost hard to fathom. “ With it, he said, “you feel that everything happens for a purpose, and that it is up to you to make this purpose something positive and active.”

Car breaks down? Ok, this was meant to be.

Computer eats my manuscript? Ok, I will make a better second draft.

Someone calls you a terrible name? Be glad they did it—they told you the truth about who they are.

The contractor looking into a problem finds mold that will cost thousands of dollars to fix? Thank you. How much worse this could have been if you hadn’t discovered it right now.

The Stoics had another metaphor for what they called the logos or the universal guiding force of the universe. We are like a dog tied to a moving cart, they thought. We have two options. We can struggle with the foolish notion of control and dig our hind legs in, challenge every step and get forcibly dragged. Or we can smile, tell ourselves that the driver is taking us exactly where we want to go, enjoy the trip and take our freedoms where they come.

Near the end of his life, Theodore Roosevelt fell ill and a doctor told him he’d likely be confined to a wheelchair for the rest of his days. His response? “Alright I can work with that!” Notice the exclamation mark. He was cheerful about it. He leaned into it (and as it happens, was up walking around soon enough.)

If the event must occur, Amor fati (a love of fate) is the response. No looking backwards. Sideways. Only forward with a smile.

Again, learning to accept what we can’t change is one thing. It’s hard enough, impressive enough, but after understanding that certain things—particularly bad things—are outside our control, is this: loving whatever happens to us and facing it with unfailing cheerfulness. Because that is what we control and it is a great, powerful force.

It what’s turns we must do into what we get to do and then makes us do it better.

The power of amor fati is that it doesn’t waste time, as Nietzsche was saying, wishing things were different, looking backwards or forwards, or through the history books to find out if what’s happening to you is fair. It only looks at what’s happening with enough strength to say, “I have what it takes to make this good for me.” It spends nothing on bitterness or blame, and puts everything towards gratitude. 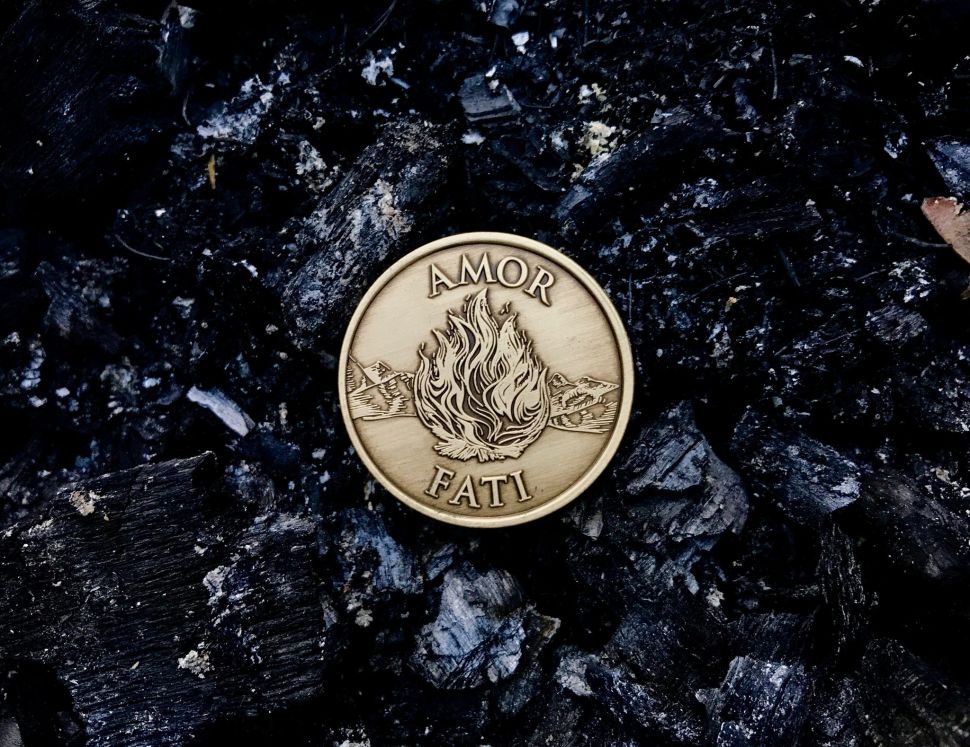