I understand why revivals dominate what’s left of Broadway, but dredging up a creaky old warhorse from 1937 like J. B. Priestley’s ossified Time and the Conways does seem a bit like digging for fossils in the La Brea tar pits. Set between wars and staged in three long, tiresome acts at the American Airlines Theatre by the Roundabout company, dedicated to resuscitating old plays for new audiences, it hasn’t been seen in New York since its original staging, 80 years ago. Minutes after it begins, it’s easy to see why.

Based on British philosopher John Dunne’s controversial theory that past is present, present is past and both meld in time lapses that inescapably lead to a despairing future that devours our dreams, the play is talky, complicated and second-rate. Considering the disastrous social, political and economic world we live in, some relevance in the dire warnings posed by past predictions is obvious, but not enough to save an old failure from the fate of becoming a new failure. Change has never more prevalent that in the societal upheaval and economic collapse in England, and Time and the Conways is most persuasive when it abandons the empty theorizing about time and concentrates on the disintegration of class values represented by the Conway family. Unfortunately, at 2 hours and 15 minutes, the play is a lot of fustian drawing-room babble. You spend an inordinate amount of time looking at your watch.

In the current production directed by Rebecca Taichman, things are off to a rocky start from the first clarion call. It’s 1919 and Mrs. Conway, a widowed, well-to-do matriarch of a family in Yorkshire, is throwing a party for her daughter Kay’s 21st birthday. All six of the Conway children bounce in and out of the room wearing garish costumes, playing idiotic charades, and gossiping outrageously about the superficial guests in the next room—and each other. This is an important act because as boring as it is, it establishes every character we are destined to know better as the years wear on. They all have big ambitions and small triumphs, and they serve as metaphors for the playwright’s jaundiced views of class, wealth and the inevitable downfall of both. But the scene is rendered unconscious by American actors screeching phony British accents in chirping decibels only a bird can decipher. Then into the fray comes Elizabeth McGovern, dressed like a Spanish gypsy, and she’s as incomprehensible as the rest of them. Now we have five women ratcheting up the babble on the same voice level. I’ve liked her in certain films, and especially while guiding a different sort of clan on TV’s Downton Abbey, but sounding like a drunken magpie, she’s hopelessly lost in a sea of apple-bobbing accents that come and go like smoke. It’s the maddening sound a piano tuner makes banging on a broken key above high C.

Inexplicably, everything switches gears in Act Two as the scene advances to 1937, the year Priestley wrote his play, and we see how time has ravaged the Conways in the passing of 20 years. The same family is now disillusioned and torn asunder by conflicts and failures. Mrs. Conway has gone through her money, leaving her children without an inheritance, and the family estate must be sold and turned into a housing development. When the children assemble to learn about their bankruptcy, the solidarity and love they expressed in Act One are gone. The accents are gone, too. Like characters from a different play, everyone is completely articulate and coherent and the play begins to take form and make sense. Carol (Anna Baryshnikov), the pretty, optimistic daughter who embraced life, is dead, and the five surviving siblings have become cynical and wasted. Kay (Charlotte Parry), the birthday girl at the beginning of the play, has turned from promising novelist into an uninspired journalist for a London newspaper. Madge (Brooke Bloom), the bright-eyed socialist, has become a stern, dowdy, embittered old maid schoolteacher with dashed hopes for love. Hazel (Anna Camp), the insouciant romantic, is now trapped in a vicious marriage to a cruel, abusive social-climbing bully who refuses to give the family a single penny to reclaim their lost station in society. Alan (Gabriel Ebert), the underachiever who hid behind his mother’s strength, is a weak puppet who has lost any hope of ambition. And Robin (Matthew James Thomas), the dashing soldier who came home from World War 1 full of plans and promise, is a futile drunkard with a wife and two children he can’t support. Instead of offering comfort and compassion, Mrs. Conway is cruel and critical, impatient and anxious to get rid of them all. The third act wafts back to postwar England in 1919 and everyone is chirping away madly all over again, but something odd has happened. It’s like they got a taste of normalcy and remain steadfast, refusing to let go of the character development they achieved in Act Two. We see how Madge’s political fever began, why flighty Hazel was first attached to the pompous, vulgar outsider who later became her monstrous and selfish husband, and when their naïve mother, blandly convinced nothing could ever go wrong, began to wake up—none of them aware of the misery and disillusionment to come. With Nazism on the rise, and another war on the horizon, the Conways have been forced to face their own extinction.

Unfortunately, a play critics once considered a brave departure from conventional dramaturgy 80 years ago has become a victim of time itself. It’s mechanical and contrived. The current production fails to disguise old weaknesses. It has a creaky fascination when viewed from a curious historical perspective, but no new magic happens to give Time and the Conways the freshness it desperately needs.

Critics May Gush, but ‘Florida Project’ Is Near-Certain Box Office Risk
Smith Brothers’ Thriller ‘Walking Out’ Will Have You Glued to Your Seat
‘The Mountain Between Us’ Stars Separated by Miserable Lack of Chemistry
Justin Long Deserves Much Better Than Trite ‘Literally, Right Before Aaron’
Jeremy Kagan’s ‘Shot’ Is a Sobering Plea for Gun Control 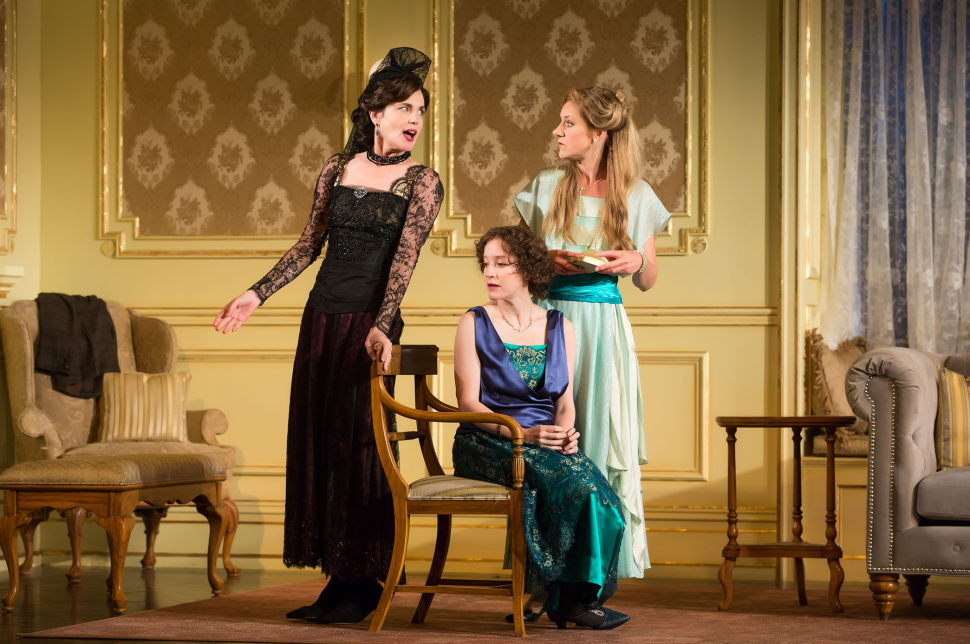