Everyone knows that the Thor franchise is the Marvel Cinematic Universe‘s weakest link. Sure, the God of Thunder is a wonderful addition when he’s playing his otherworldly cluelessness off of Tony Stark, but on his own, his movies have been a bit of a bore. That’s why it was so exciting when Marvel announced that indie pro Taika Waititi would be directing Thor: Ragnarok, immediately making it one of fall’s most anticipated movies. Waititi is one of the more unusual directors out there and we mean that in the best way possible. If you haven’t seen Hunt for the Wilderpeople and What We Do in the Shadows yet, please do so immediately. Seriously, they’re on Hulu right now. Go for it.

Thor needs a touch of weirdness to work. After all, this is a character who is a Norse god and spends most of his time in a celestial space castle and talking about something called the “rainbow bridge.” Why would you want to play that straight? Thankfully, it sounds like Waititi gets that as early social media reactions from critics suggest that Thor: Raganrok is a gonzo good time. Full reviews are still under embargo for a few weeks, but it sounds as if Marvel has another winner on its hands.

Loved ‘Thor: Ragnarok’. @TaikaWaititi did an awesome job. Movie is loaded with his trademark humor. Laughed beginning to end. pic.twitter.com/kfROuqSyVe

'Thor: Ragnarok' has a few surprises I didn’t know about. One of them is A-M-A-Z-I-N-G and possibly the funniest scene in any @Marvel movie. pic.twitter.com/NRNFeftHyQ

‘Thor: Ragnarok’ music/soundtrack is fantastic. And some of the visuals are insane. Seeing again as soon as I can. Another @marvel winner. pic.twitter.com/GgCUEiDcmC

#ThorRagnarok is laugh out loud funny from start to finish. Stumbles a bit in the first act, but it triumphs when it gets weird with it.

All the new #ThorRagnarok characters are knockouts, but Tessa Thompson walks away with this movie. All hail Valkyrie.

The technical work on this movie is spectacular too. Visuals are stunning & Mark Mothersbaugh's score might be Marvel's best.

Thor: Ragnarok is just plain fun. It's hilarious from start to finish with quirky performances & exciting action. Tessa Thompson is the MVP. pic.twitter.com/7GyYG4IZZ5

#ThorRagnarok is a ton of fun! Self-contained MCU plot, but character work is awesome, and the adventure a thrill. Best of the Thor movies! pic.twitter.com/tQ8DuCcwxM

#ThorRagnarok is the best Thor movie BUT still think it’s really good not awesome. Hemsworth, Hulk & Tessa all great, though. And Goldblum! pic.twitter.com/rY6ItFzdjN

Beyond Waititi’s involvement, Ragnarok has a lot going for it. For starters, the movie will feature Mark Ruffalo’s Bruce Banner/Hulk, giving the film a “buddy cop in space” vibe. It also doesn’t hurt that Hulk has become a fan favorite in these team-up settings. Waititi, known for his wink-wink LOL humor, also came in with the goal of leveraging Hemsworth’s comedic chops, which it sounds like he does. The movie also has a great cast with Idris Elba, Jeff Golblum, Tessa Thompson, Karl Ubran, Anthony Hopkins, Tom Hiddleston, Cate Blanchett and…others joining Hemsworth and Ruffalo. As you can tell by the tweets, it looks as if Thompson (Westworld) provides a breakout performance. Will she be a new love interest with Natalie Portman exiting the MCU?

All in all, Thor: Ragnarok sounds like the best Thor film by far and a great self-contained Marvel movie in general. You can decide for yourself when it hits theaters on November 3. 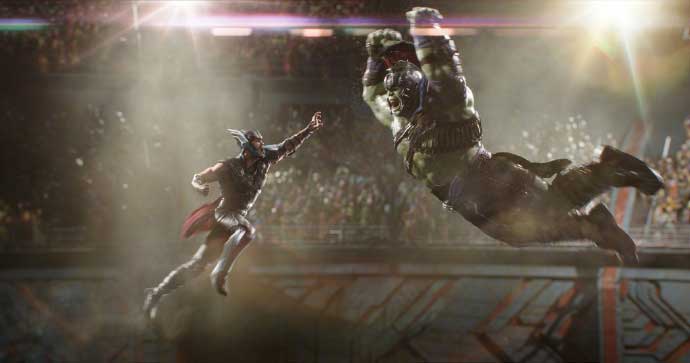