In late 2016, Google took the smartphone world by storm with the HTC-built Google Pixel and (especially) the Pixel XL. For a very short time, it looked like the Pixel XL was the device to beat. Although some found the glass and metal design boring, Google’s new flagship smartphone offered a crisp 5.5 inch Quad HD screen that rivaled that of Samsung’s devices. Both phones boasted the best smartphone camera ever built at the time.

Perhaps the best thing about the Pixel was how smoothly it ran. Many referred to it as the iPhone of the Android world, and they were correct. Text messaging, scrolling through internet pages, and switching apps were just as easy on the Pixel as they were on the iPhone 7. According to some, Google Assistant worked even better than Apple’s Siri. Others even touted the mega-sized model, the Pixel XL, as the most revolutionary smartphone since Apple unleashed the iPhone one decade ago. So, what happened? Why did the Pixel XL soon join Google Glass in the Technology Hall of Shame?

Google really dropped the ball with this. At first, the Pixel XL was only available at the Google Store in October of 2016. Stock levels were an absolute joke, and one needs to ask why Google didn’t have enough phones available when the Pixel XL was considered to be not only an iPhone 7 Plus alternative, but a reliable replacement for Samsung’s recalled Galaxy Note 7 as well.

The Pixel XL sold out at the Google Store in October, briefly appeared, sold out again, and the cycle went on to the point when people just stopped caring. It was also exclusive to Verizon, though consumers could purchase the phone (which had an unlocked SIM everywhere it was released in the U.S.) and use it on AT&T or T-Mobile—something that many subscribers of these carriers didn’t quite comprehend. Best Buy eventually carried the Pixel XL, but also sold out right away when released in October of 2016. However, by December, one could easily walk into almost any Best Buy and purchase the device for a whopping $769. But the ship had already sailed, Google lost out in a perfect example of poor planning and marketing.

Surely on that front, at least, the company will have learned its lesson, and when they roll out the new Pixel phones after their announcement tomorrow, the device will be widely available and without the same problems of availability.

But early reports about the new Pixel releases indicate that Google may not have learned much about how to compete in the smartphone world. According to The Verge, the screen will grow to 6-inches (like Samsung’s phones), the screen edges will be curved (hello again, Samsung!), a second speaker will be added at the bottom for stereo sound (similar to Apple’s phones), the bezels will be reduced (like both Apple and Samsung’s phones), and they even take Apple’s idea of making the physical headphone jack disappear—a move that has proven controversial, as Bluetooth headphones don’t offer the same robust sound as their wired counterparts.

And that’s the problem with Google’s phones: The company hasn’t released a smartphone that differentiates itself enough from those produced by Apple and Samsung. Instead of standing out, the Pixel XL stands side-by-side (hardware-wise) with the iPhone and (software-wise) with Samsung’s Galaxy S and Note series.

It’s interesting that HTC is building the Pixel 2 models, because HTC has often tried to differentiate its smartphones from the iPhone and other Android phones. For example, in 2013, the HTC One broke the smartphone mold by including powerful and huge stereo speaker grills on the front that offered robust sound never heard smartphone speakers before. But we see none of that innovation in either the last Pixel, or reports about the new one.

The rumored aspect ratio of the Pixel 2 XL’s six-inch screen is 18:9—not much different from the 18:5:9 screen aspect ratio of Samsung’s new smartphones, which some say is too narrow. Consumers have replaced tablets with huge smartphones. What about taking chances and building a screen with a 3:2 aspect ratio?

According to pre-launch leaks, the camera is the one main feature that will differentiate the Pixel 2 and Pixel XL from Apple and Samsung’s latest, and that’s not a good thing. Google doesn’t realize that many consumers value their smartphone camera far more than other features. One would think that after the advanced camera in their 2016 releases, Google would try to keep the market cornered and update their devices to compete with Apple and Samsung.

Both new Pixel devices appear to have opted for the single lens, which, while powerful, doesn’t allow for optical zoom. Apple and Samsung’s latest smartphones are one-upping Google with dual-lens cameras. Some may argue that the Pixel 2 and Pixel 2 XL don’t need a dual-camera lens, but those people obviously haven’t seen the images coming from the iPhone 8 Plus or the Galaxy Note 8.

A dual-lens camera allows optical zoom, whereas a single-lens camera can only zoom in digitally—which comes at the expense of photo quality. In addition, dual-lens cameras have heightened capabilities with focus quality, and in differentiating the background from the main subject of the picture. In short, it appears with these new devices that Apple and Samsung have stolen away Google’s edge in photographic capabilities, too.

Will Apple Stand in the Way of Widespread Public Wireless Charging?
Everything You Need to Know About iPhone X, iPhone 8 and Apple Watch Series 3
Samsung Galaxy Note 8 Preorders Have Started Arriving—Here’s What Users Are Saying 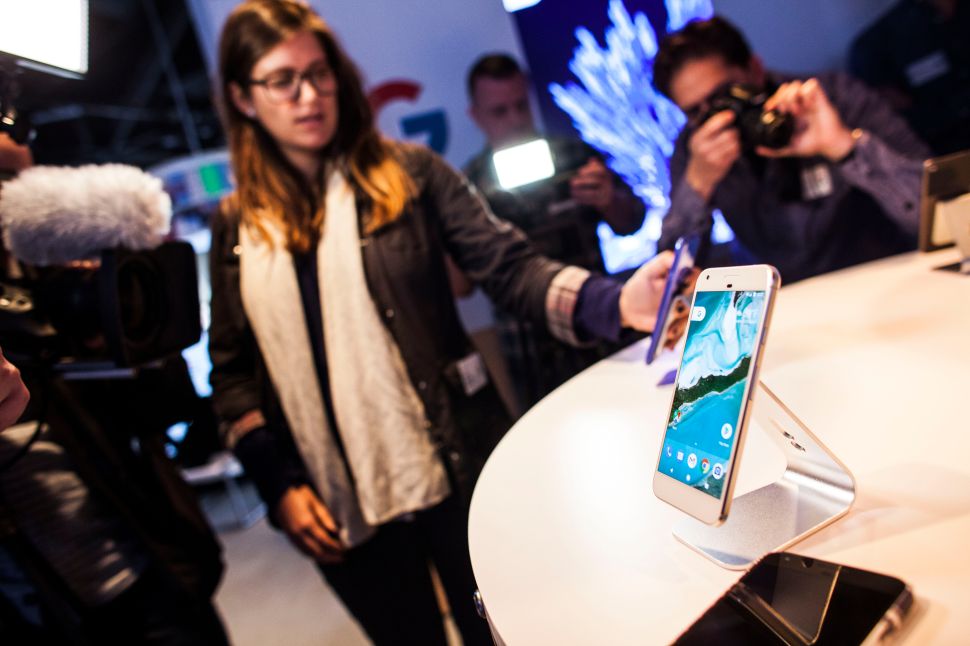