America First Policies, one of several outside groups established this year to support Trump’s agenda, commissioned a poll that found 71 percent of New Jersey likely voters for the 2018 midterms said the Senate should expel Menendez if convicted. Nationwide, 75 percent of respondents agreed, according to the poll.

Expelling Menendez from the Senate would be a colossal task, requiring 67 votes, or two-thirds, in a chamber currently split between 52 Republicans and 48 Democrats.

But expulsion may end up as the only ticket Republicans have at gaining a crucial Senate seat before the 2018 elections.

The trial is expected to run through November. New Jersey Democrats and Senate Minority Leader Chuck Schumer (D-N.Y.) have declined to say Menendez should resign if convicted — and there’s a possibility that the embattled senator could hang on to his seat, at least for a few months, if the jury found him guilty.

If Menendez left office before Jan. 16, Gov. Chris Christie, a Republican, would be able to appoint an interim replacement, likely boosting the GOP’s majority by one seat. But Phil Murphy, a Democrat who supports Menendez, is favored to win the governor’s race this year and would likely appoint a Democrat.

The stakes are high for Trump and his supporters. White House counselor Kellyanne Conway has repeatedly zeroed in on the Menendez trial in recent public comments, and the poll by America First Policies was conducted partly by The Polling Company, which Conway owned until recently. The other polling firm was National Research Inc.

The GOP’s slim Senate majority prevented the president from signing a core campaign promise into law, repealing President Barack Obama’s Affordable Care Act, after several tries this year. In each attempt, a handful of Republican senators defected and doomed the plan, since all 48 Democrats were opposed.

“Our polling reinforces what we already know: New Jersey voters and Americans as a whole are sick and tired of the corruption and abuse of power taking place in Washington, D.C.,” said Erin Montgomery, communications director for America First Policies. “The trial of Senator Menendez is yet another lurid example of why we need to drain the swamp.”

“So a push poll done by Trump adviser Kellyanne Conway’s company and commissioned by the far-right-aligned America First Policies comes out with the conclusion that Bob Menendez should not be in the U.S. Senate?” Soliman said. “This should not be surprising to anyone with more than a first grade education.”

America First Policies is a nonprofit 501(c)4 social welfare organization that may raise unlimited amounts of money without disclosing donors. Its president is Brian Walsh, a New Jersey native who has worked on several high-profile GOP campaigns and groups. America First Policies also includes some top advisers to Vice President Mike Pence and to the Trump campaign.

Other surveys by independent pollsters have found declining support for Menendez in recent months. A poll last month by Suffolk University found that 84 percent of New Jersey likely voters said the senator should resign if convicted.

Menendez has maintained his innocence and the case hinges on whether a series of campaign donations, flights and trips from his top donor, Florida eye doctor Salomon Melgen, were given as a bribe so Menendez would advocate Melgen’s business interests in Washington. The senator says he and Melgen have been friends for decades and that their relationship is being miscast as corrupt. 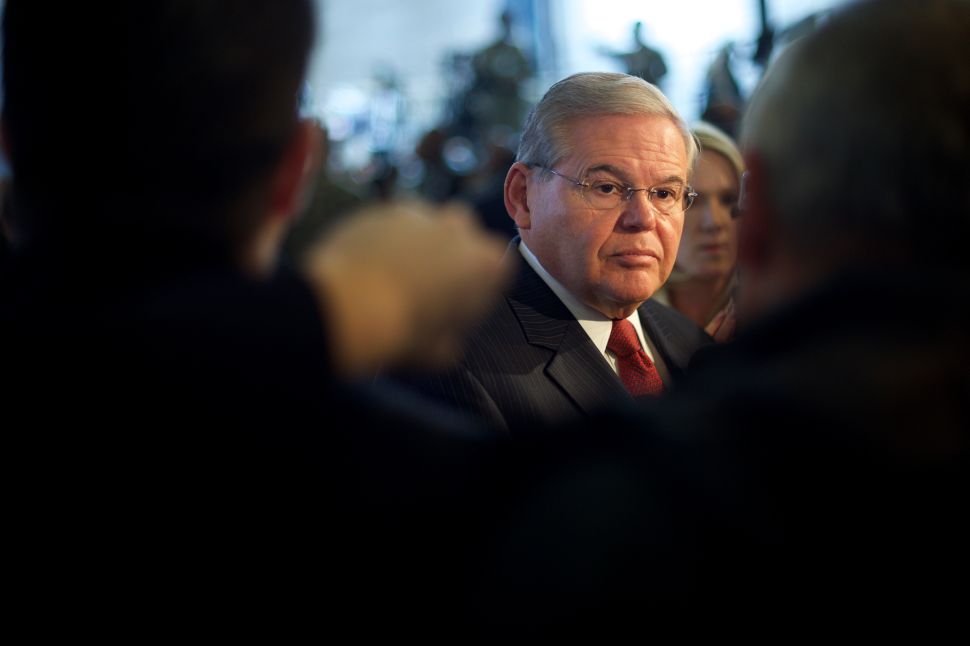