Puerto Rico got Twitter Trump, and Las Vegas got Teleprompter Trump. The first is the real Donald: prone to repetition, superlatives and self-obsession but also defensiveness, grudges and surliness.

The second usually appears after the first gets terrible reviews and, likely, a staff or family intervention ensues.

Teleprompter Trump is scripted, tight, and clearly not in it. He feels caged and constricted; he’s clipped and lifeless. But he does no harm and not coincidentally has accrued the few good notices of his term when Teleprompter Trump comes to the podium.

The president visited two very different disaster zones this week. The country waited with bated breath to see if one of a president’s greatest obligations, to be the empathetic mourner in chief, was something Donald Trump could handle.

He couldn’t rise to the occasion. He is too arrogant, too much of an egomaniac, and he did not have it in him to fake kindness, reveal nonaggressive strength, or show the fractured communities in front of him that he cared.

His appearances contrast with major moments in recent history when horrific circumstances have necessitated that a president shifts gears and steps into the role.

Sweet and touching, Barack Obama became the entire country’s tear-soaked pillowcase when he flew to Newtown after Sandy Hook. He crouched on the floor of a holding area in what looked like a gym or a hangar and had the siblings of some of the 26 kids gunned down by several gun-wielding maniacs crawl all over him. Judging by their grins, it was good for those kids, and it was good for us and our ransacked souls as well.

Strong and resolute, George W. Bush stood on the smoldering pile of the World Trade Center and reassured our shattered psyches. His appearance mattered to the first responders and to every one of us—even, I’ll admit, to those of us who didn’t vote for him and hated his every policy decision. We needed this show of strength from our president. It was a stopgap when we were close to an abyss.

And Bill Clinton? He hugged and personally addressed every person in Oklahoma City that afternoon, holding their hands and looking into their eyes after a right-wing terrorist blew up a federal building.

Political calculus was left out of these moments because a real leader parks it at the door in a crisis. New York didn’t vote for George W. Bush, Oklahoma rejected Bill Clinton in droves, and Barack Obama likely already knew that he would never be able to make a dent in the gun industry’s murderous grip on Congress and would have to soon bare bad news that would let each of those Connecticut families down.

But they all rose to the occasion.

Trump had no heart, no brain, no grit, and no understanding.

He told the people of Puerto Rico that because thousands didn’t die (the implication being because of his response), the ruin of their homes and businesses by Hurricane Maria wasn’t a tragedy. He continually returned petulantly and defensively to his obvious goal, which was to defend himself and lash out at critics of his administration’s pathetic, anemic response to a humanitarian crisis. He scolded the island and further minimized their standing as American citizens by saying that recovery was a drain on the budget.

No budgetary issues were brought up in Texas or Florida, but then again, Puerto Rico is politically expendable to Trump and his narrow outlook, in which the question “are they MY PEOPLE?” drives the response. Trump made it clear to the Latino-populated island that in Trumpworld, they and their plight just aren’t equal.

Let us not forget the mayor of San Juan. Trump failed to so much as leave her a cursory thank-you-for-your-leadership note, which is every elected official’s go-to when they don’t know what to say. After calling him out on cable news? Forget it. He should have said, “We’ve had our differences, but I want to acknowledge Carmen Yulin Cruz for putting the people of the island first,” but no such maturity crossed Trump’s mind and no such magnanimity crossed his lips. Despite being president, Trump can’t let criticism go.

For God’s sake, Barack Obama found a way to play nice with Jan Brewer. It’s what a president does.

After Trump’s performance in Puerto Rico, I was surprised that the chief executive and his staff didn’t try harder in Las Vegas. It even factored into his political calculus: It’s a swing state, and the shooting took place at a country music festival. So if he couldn’t do it in Las Vegas, he’s just incapable of heart. His delivery was rushed and lacked emotion. His eyes flatly read from preloaded material. Viewers got the feeling that it just didn’t matter.

Maybe that explains the teleprompter. With Trump, it’s either aggrieved and aggravated, or the quick and the dead.

In Trump’s America, Not All Natural Disasters Are Created Equal 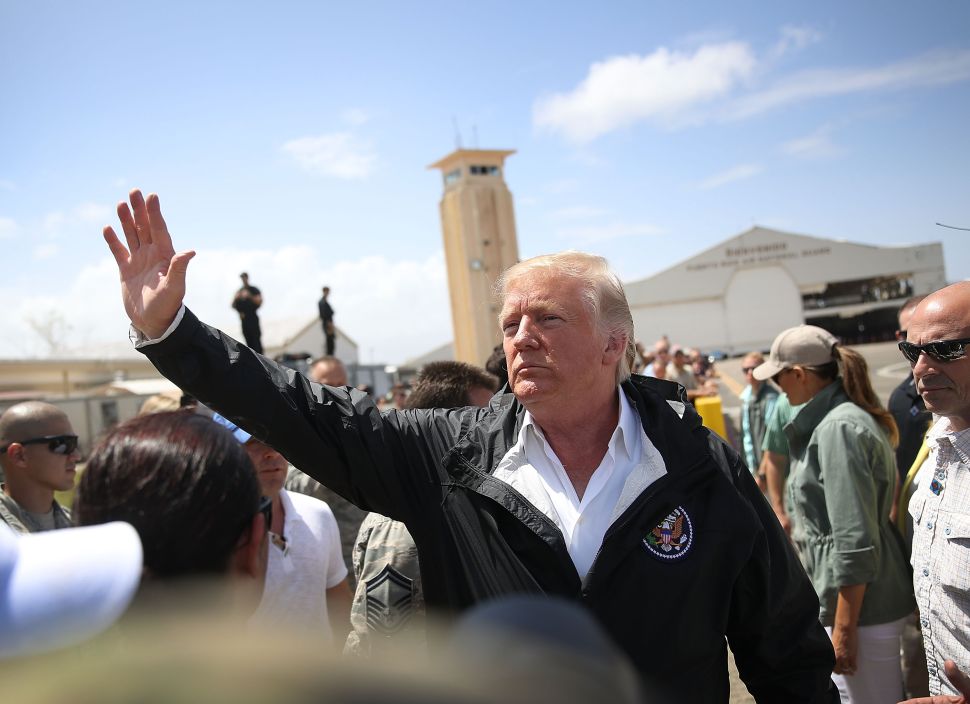